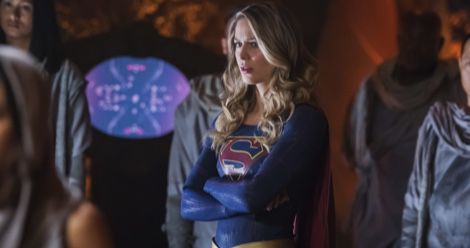 When Supergirl debuted in 2015, I was super excited (ha). I hadn’t read much of her in the comics, but the prospect of a female-led superhero show thrilled me. The fact that it also featured a black leading man, Calista Flockhart as the best bad boss ever, and a lesbian supporting character was icing on the cake.

Then came the dark days, aka season two. Flockhart left. Supergirl spontaneously decided she didn’t have a crush on the black leading man anymore and ditched him for the most annoying new character in the universe. Not even Tyler Hoechlin’s very excellent Superman could keep me interested.

By the time the fourth season rolled around, I was willing to give the show another chance. Why? That is 100% thanks to the addition of Nia Nal, a transgender character played by transgender actress Nicole Maines. (Nia is amazing btw.)

But it soon became clear that the show had more to offer than just a relatable new character. In the intro, Supergirl describes herself as “a refugee.” The season’s main villain is Agent Liberty, a masked man bent on spreading hatred against (space) aliens; he and his followers refer to all aliens as “roaches.” (Sound familiar?) At the end of the second episode, we see Agent Liberty leading a crowd of mostly white people in a chant of “Earth first!” while they pump their fists in the air. Yeah, the veil on this metaphor fell off real quick.

Somehow, it still surprises me when superhero shows start using Trumpian phrases and tactics to code their villains as the ultimate evil. It really shouldn’t, given that superheroes have been sticking it to Nazis since before America entered World War II. Joe Simon and Jack Kirby invented Captain America for exactly that purpose.

As for Superman (Supergirl wasn’t created yet), his World War II record is…checkered. The image of Supes gleefully printing posters encouraging people to buy war bonds as anti-Japanese propaganda is now quite infamous. But he has more recently defended the American way in a more wholesome manner. Last year, Superman saved Latino workers from a gun-wielding racist.

Supergirl is only the latest superhero show to go out of its way to associate its villains with the current administration. Agents of S.H.I.E.L.D. showed us a character had turned bad by having him use the phrases “she persisted” and “make our country great again.” Black Lightning’s first-season villain also talked about making America great again. So yeah, I really need to stop being shocked every time a superhero show does exactly what a superhero show is supposed to do and drags bigots through the dirt.

The October 28 episode of Supergirl, “Man of Steel,” (spoilers ahead!) unmasks Agent Liberty and gives us his origin story. He is really Ben Lockwood, a former college professor who gradually allowed anti-alien xenophobia to consume him.

This is something of a change from his comic book personality. From the 30 seconds of research I did, Lockwood was a good guy. A disillusioned ex-CIA man, he joined the Sons of Liberty, who hoped to overthrow the government. But Lockwood soon grew disillusioned with the Sons of Liberty as well and quit. He defended Metropolis as a solo vigilante until his death in 2009 in Action Comics #873.

The fact that Supergirl took one look at this uber-patriotic white guy and saw fit to turn him into the worst kind of villain is truly a sign of how times have changed. No longer is self-declared patriotism a virtue. Rather, it should serve as a warning.

At the start of the episode, Agent Liberty and two of his associates have irradiated Earth’s atmosphere with kryptonite, nearly killing Supergirl. While her friends race to the rescue, Alex Danvers, Supergirl’s sister, wonders who would do something like this.

We answer her question by cutting to a few years ago, when Ben Lockwood was still a perfectly ordinary family man. He believes humans and aliens can coexist. His father, who runs a steel factory that can’t keep up with a rival factory using alien technology, does not.

Lockwood’s fortunes fall slowly and painfully. His father loses his business and ultimately kills himself because he doesn’t want to live in a world that accepts aliens as equals. His house is destroyed in an alien invasion. Everyone he goes to for help turns him away.

Following each of these events, Lockwood crawls further down the rabbit hole. He’s fired for defending the term “nativist” and proudly describing himself as such. (This one is probably a coincidence, given the timing, but again, it sounds real familiar.) He sets that rival factory on fire and murders several aliens. And finally, he becomes Agent Liberty, a powerful leader who urges humans across the country to take up arms and eliminate all aliens by any means necessary.

THE LIMITS OF SYMPATHY

My first feeling while watching this episode was one of extreme discomfort. In case you couldn’t tell from my last name, I am Latina. Every time I check the news, there is a non-zero chance I’ll be greeted by racists comparing me and my family to animals or screaming about building a wall to keep people like us out. So watching Lockwood go from practicing tolerance to spitting slurs was upsetting. I spent most of the episode with a sick feeling in my stomach. Like I said, Supergirl hasn’t exactly been subtle about the Trump comparisons. When Agent Liberty says horrible things about space aliens, it feels like he’s saying them about me. Because he is.

The more the episode progressed, the more I began feeling uncomfortable for a different reason. Despite his long and growing list of crimes, I can’t help wondering if this episode may erase some of the work the creators have done to establish Agent Liberty and company as unsympathetic monsters. Some fans love nothing more than a tragic backstory, especially when it’s attached to a pretty face. Some might look at Lockwood and think, “I don’t condone his methods, but I understand why he feels that way.”

Me, I’m Mexican American; I’m not about to feel sorry for an asshat who blames all of his problems on immigrants. But the fact that this show’s metaphor for Trump/Nazism in general is so transparent makes it disturbing to think that some viewers might actually sympathize with Agent Liberty on any level.

Normally, I’m all for villains getting character development, but that’s when the villain is a comic book bogeyman or an antihero of some kind. When your villain is a blatant allegory for people who are terrorizing others in the real world right this minute, humanizing them feels wrong, even irresponsible. I don’t care about why Agent Liberty is the way he is in the same way I don’t care about Donald Trump’s personal problems or Steve Bannon’s deep inner struggles. These men are so far beyond the pale that trying to root out any remaining nugget of humanity is pointless. It won’t do anyone any good, least of all their victims, so why bother?

I’m certain the creators did not intend to make anyone feel sorry for Lockwood. Given the tone of the rest of this season, it’s clear that we’re supposed to hold Agent Liberty and his followers in the same regard that we hold a leaky septic tank.

Or rather, I should say it’s clear to me. I hope my fellow viewers don’t get so lost in Lockwood’s past that they forget his present. Perhaps at some point he deserved our sympathy, but he lost all right to that before we ever met him. Hopefully, future episodes hammer that point home.

It also doesn’t help that most of “Man of Steel” is from Lockwood’s point of view, with only brief appearances by the main characters. Telling a story from the monster’s perspective is always dicey. Look at all the people who think Lolita is about an underage seductress ruining the life of that perfectly nice Humbert Humbert. (Better yet, don’t look at them. Run far away from them.) Sure, you could argue that only creeps would read it that way, but why would you want to give such despicable people something to latch on to?

By the end of the episode, I still wasn’t sure how to feel, so I pounded out this post to try to sort through it all. Writing in general always makes me feel better, so I guess in that respect it helped. All I know is that, to me, “Man of Steel” is a cautionary tale, warning us that even the most generous and open-minded souls can become angry, hateful extremists. I just worry what this episode might be to others.