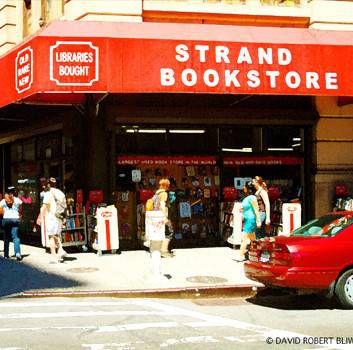 You always remember your first time. At The Strand, I mean. The bookstore’s name is known far and wide and, as someone in the book industry, it seemed almost criminal that I’ve never visited the store. I’ve been to New York on several occasions, but I’ve always lacked the time to do anything…fun. That’s the price you pay when you’re a workaholic. After working through my schedule, my last meeting was schedules for four in the afternoon. That left me plenty of time to do something pleasant in the city before catching a train back to Boston in the morning. And what did I do?

I sent a message to the ever-wonderful Rioter Rachel Manwill about going Stranding, and she was fully onboard with the idea.

I was glad I arrived before Rachel. Since I’d never been before, walking into the store was overwhelming. Every feasible inch that could house a book, does, and it was packed. Rachel later informed me that it’s nearly always like that, so there’s very little off-peak time. The floor space left for walking is minimal and I thanked the heavens I was short, though that would prove to be a sore spot later on during my browsing.

With three floors of books, miles upon miles of reading material, it was easy to get lost in the aisle. My phone was on the fritz, so I sent Rachel a parting text, “I have glasses and red gloves on,” with the hope that she’d eventually be able to find me without having to send up a flare. Spoiler alert: She found me, and we had some awesome noodles after buying things we probably shouldn’t have.

The fiction section was the first thing I found. The shelves wind around the back of the store and reach probably ten feet in height. Maybe? Everything is tall to me. All I know is that there was no way I could reach the top three shelves unless I had a ladder. And The Strand definitely has ladders. I watched customers and employees carrying them around, setting them up in narrow aisles, pushing them aside to a reach a book between the rungs. But those top three shelves were a no man’s land for me. I wasn’t even going to bother and hopefully, that would reduce my browsing time.

However, that reduction was negated by the fact that their selection of romance was littered in nearly every possibly section and sub-section of fiction. There was an erotica section with books there. Some paranormal romances were in the science fiction section; some were in the horror section. Most were interspersed throughout the general fiction section, but since there were so many books, I quickly grew frustrated with going up and down each aisle. I soon resorted to looking at the colophons on the spines, like a sailor searching for the North Star. The only way to conquer The Strand’s shelves is to search for something specific and, even then, it may be reshelved elsewhere. Also, if they ever wanted a dedicated romance section, I would happily comb through the shelves for them. Seriously. Call me. 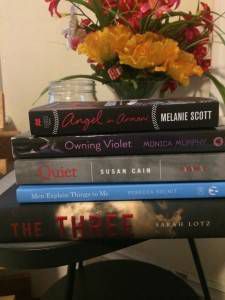 Despite their overwhelming selection and the fact that I get anxious in crowded spaces, I of course left the store with some books. If you’re not after something specific, finding books in The Strand is a bit like a treasure hunt and I feel like everyone has a “big find” story. Some next book in a series or an author they just heard about, tucked away in the stacks somewhere.

Mine consists of finding the sequel to the best book I read in February in the half-off paperback section. It was glorious. I can see why people wind up leaving the store with baskets and carts full of books, finding things they never knew they wanted.

Would I return in spite of the chaos? Absolutely. Buying from independent bookstores is certainly an experience, but The Strand delivers on another level; from the ceiling-high shelves to the wide array of clientele combing the stacks, it was unlike any book buying experience I’ve had in the past.

And now, all I can think about is what new and used things will trickle until I can return. What great things will await me on the shelves of The Strand?