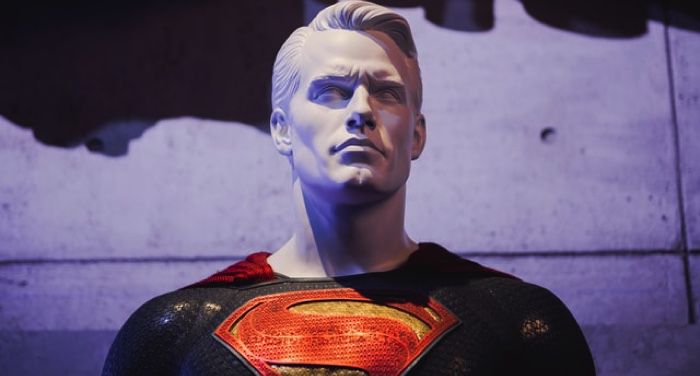 Despite being the oldest and one of the most beloved superheroes of all time, Superman has a reputation today for being difficult to write. He’s both incredibly powerful and unflaggingly good, which often leaves modern writers a bit stumped, and has led to a succession of truly depressing Superman movies.

Golden Age writers, however, understood that the secret is not throwing ever bigger threats at Superman, giving him a mullet, or making him a stalker and/or murderer. No, the secret is simple: put him in absolutely ludicrous workplace romcom scenarios. My favorite comes in Superman #20 (February 1943), written by Superman creator Jerry Siegel and drawn by Ed Dobrotka.

The story, “Superman’s Secret Revealed!” begins with Clark Kent and Lois Lane leaving “a swanky restaurant” after lunch, but when he asks the hat-check girl for his hat, she presents him with a Superman costume instead:

Clark is naturally stunned that his secret has gotten out, but then Lois laughs and explains that it was all a prank: she had Carl, the head pressman at the Daily Planet, print up a few fake newspapers as a gag. Little does she know, though, that while she and Clark were at lunch, Carl was struck with appendicitis…meaning that the rest of the printing team assumed the fake edition was the real edition, and printed hundreds of thousands of copies of Lois’s “expose.” A wire service picked up the story, and now the whole world knows that Clark Kent is Superman. WHOOPS.

Back at the office, editor Perry White is furious that Lois’s joke has ruined the Planet’s reputation, and Clark of course is none too pleased either, although not for the reason Perry and Lois think. Lois, for her part, refuses to acknowledge that she has done anything wrong even though she super duper has. I love her.

Luckily, Clark has a solution:

Clark appears to be conflating two separate hoaxes here: “The Great Moon Hoax,” a series of six articles claiming to have discovered a civilization on the moon, and “The Balloon-Hoax,” a single article describing a trip across the Atlantic Ocean in a hot air balloon. Both stories were published by The Sun in New York.

Except, uh…”The Great Moon Hoax” was published in 1835, and “The Balloon-Hoax” in 1844 (it was written by Edgar Allen Poe!). Clark, honey, I feel like “people were okay with this a hundred years ago so it should be fine now” is not the solid argument you think it is.

Either way, Lois and Perry think it’s a great idea, and immediately bully Clark into a Superman costume:

Look. This is not a good working environment. If your boss makes you put on a Superman costume in order to lie to the public, remember that we are in the Great Resignation, and quit like the wind.

Naturally, the shenanigans escalate, with Lois demanding that Perry and a supposedly terrified Clark crawl out onto the window ledge to stage some Supermannish stunts. Clark decides to get a little bit of his own back by pretending to fall, which shocks Perry and Lois into deciding he should lay low until the hoax is exposed.

Easier said than done, because a crowd has gathered outside, complete with a then-exceedingly rare cameo by Batman and Robin. This is actually a huge deal, since at this point Superman and Batman had never officially met. They appeared on many covers together, but never interacted in the actual stories. They wouldn’t meet for real until Superman #79 in 1952 (it’s a “there was only one bed” story, YES REALLY), so this little Easter egg is a significant piece of comics history if you are a huge continuity nerd, which I obviously am.

Suddenly, someone starts shooting at “Superman,” reminding Clark that this stunt is dangerous. (Lois continues to refuse to admit it’s a bad idea. I LOVE HER.) Meanwhile, Perry decides to up the ante by calling a bank president friend of his bank and talking him into staging a holdup that will be thwarted by “Superman.” This is overheard by some gangsters who have coincidentally snuck into the Planet offices for murder reasons. Of course it is.

Clark is pressured into participating in this truly terrible farce, but unbeknownst to all of our heroes, the real gangsters, knowing “Superman” is a fake, kidnap the actors who have been hired for the staged robbery and take their place. They hold up the bank for real and attempt to kill “Superman” — but Clark, of course, just pretends to have been replaced by the “real” Superman, and easily thwarts the gangsters before leaving and returning as “fake” Superman.

But one of the gangsters is determined to at least kill Lois, because why not. He shoots at her, and Clark throws himself in front of the bullet:

And there it is: a perfect screwball ending. Yes, the slap is a dated trope that I’m glad we’ve left in the past, but can’t you see Rosalind Russell and Cary Grant acting out all of these scenes? I can, and it’s a beautiful dream.

There are plenty of other Golden Age Superman stories that steer into these delightful hijinks, and like I said, Lois & Clark was very much in this vein as well. I am holding out hope that the upcoming My Adventures with Superman will have a similar energy — everything I’ve heard about the show so far has been encouraging!