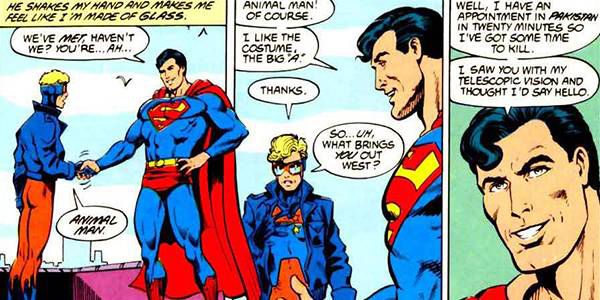 There are moments in comics that stick with you. fragments of prose, knots of plot, a panel of art that burns itself into your retina.

And then I put them all into a drawer.

As a guy who has written some comics and continues to write more, the junk drawer is part of the larger tool chest. It’s not necessarily made up of processes or structural guides or formatting tricks; this is the drawer dedicated to that stuff keeps you reading comic — that keeps you discovering comics.

Me, I find myself writing toward that junk drawer. I want to use elements… I want to understand elements. I sometimes want to cobble together all those disparate elements into some kind of Ultimate Story.

And that’s what I’m going to explore in this column — My Comics Junk Drawer.

Let’s take a peek inside…

That moment in Alan Moore’s Swamp Thing where he describes The Flash as a man who runs so fast his life is an endless gallery of statues, a line that instantly swivels my entire perspective on the super-hero.

“The Dream of a Thousand Cats” — an entire story in The Sandman dedicated to the power of story and the reality of fiction.

That full page in Hellblazer in which John Constantine gives the finger to the devil.

Storm, feverish and trapped underground, runs a knife through Callisto to save the X-men and to take leadership of the Morlocks living underneath New York.

That final page of Ex Machina #1, in which one of the twin towers remains standing — forever changing history while plotting the course for the series.

That moment in Suicide Squad in which Slipknot — a villain who makes knots and no, I’m not kidding — runs off and Amanda Waller detonates the bracelet on his wrist, blowing off his hand. Tough break for someone who ties knots for a living.

And this one… one of my favorites. I’ll leave you with this one:

It’s an issue of DC Comics’ Animal Man, written by by Grant Morrison and illustrated by Chas Truog. Truog’s artwork is perfect — clean art that fits the super-hero mold, but somehow less barrel-chested and heroic that a George Perez or John Byrne. It works perfectly for Morrison’s take on Buddy Baker, a family man who dons a costume but adds a denim jacket because he’s self-conscious of how he looks in Spandex. And there are no pockets in a spandex outfit.

I love this premise, but it needs a particular scene to give it context. That scene comes in issue #2 of the series, which Buddy take a break from patrol, sitting on a rooftop and unwrapping a sandwich that his wife, Ellen, has made for him. He’s listening to his Walkman (another benefit of the jacket), and REM’s “I am Superman” comes on at exactly the moment that Superman flies by.

Superman spots Buddy and stops to shake his hand to welcome a fellow hero to the fold. Buddy gapes in awe of Superman…

Why does this one stick? Because this is the moment that I understood the DC super-hero universe.

As a kid, Marvel seemed edgier and more modern than DC. Frankly, I couldn’t wrap my head around why Superman or Batman would wear underwear on the outside of their tights. It just didn’t compute (though, Miller’s Dark Knight Returns got a pass through sheer grit).

And then I saw the world through Buddy’s eyes, and I realized that I had it backwards.

In this super-hero universe, Superman was the aspiration: a man whose celebrity was his heroism. Bigger than movies and sports games and red carpet appearances.

The DC Universe was not our world. It was the DCU, the home of Superman. And it doesn’t matter is Superman wears red underwear on the outside. Because in the DCU, that was cool.

I imagine models on runways wearing fashion inspired by Superman and Wonder Woman.

And how cool a world is that?

This is my junk drawer. Welcome to it.