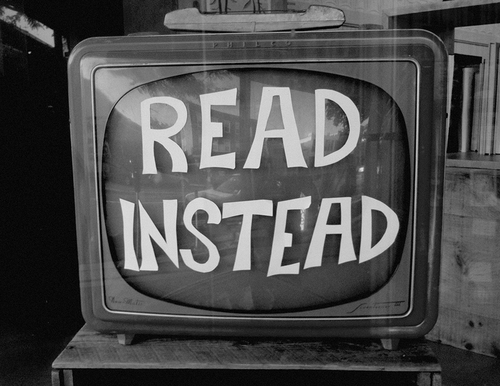 A little over a week ago, I decided to try 72 hours with no television. I polled friends (both of the literary set and not) and colleagues to hear who spent what amount of time reading vs. watching TV. Not surprisingly, most of my book blogging/ writing/ literary peers said that they spent (on average) 75-80% of their time reading (with no TV on). Of my other friends (who do not read for work), roughly 98% (again, an average) said TV is on basically every day — though reading might also happen.

Charged with this information, I figured it would be a no-brainer. No TV for 72 hours would mean at least a few books read and finished. Not so. Not even one. The amount of extra time I spent reading during those three days was a total of two hours. Two extra hours in a 72-hour period! This is not to say I didn’t read. I did (as always), just not much more than normal. What did happen? I got an entire trip booked (with deals researched, thank-you-very-much), spent extra time with friends, went to the salon for some much needed tune-ups, spent extra time with family, and adopted a pet.

My hypothesis was proved wrong. However, I realized something… I do spend too much time watching TV (though I don’t see that changing in the foreseeable future), but it doesn’t cut into my reading time, as I read for several hours each day (not including reading that I do for work). I’ve learned that aside from those who read for work or for educational purposes, reading is a leisure activity (as is TV), and many people who don’t watch TV might find that they do not spend the extra time reading, but rather doing other leisure or social activities (hobbies, dinners, etc.). I wonder if TV isn’t the enemy of reading, but rather the enemy of a well-rounded life? Perhaps if we spent more of the time that we spend watching TV doing activities with our families, making items, working that extra hour, exercising, etc. our lives would be more productive. And maybe the same would be true if I didn’t read as much as I do. Too bad this girl will never know, though she will be a well-rounded form of relaxed. The moment that TV came back on, I binged, and then I read for several hours that night… while cuddling with my new pet.

What are your thoughts? Is TV the enemy of the book?