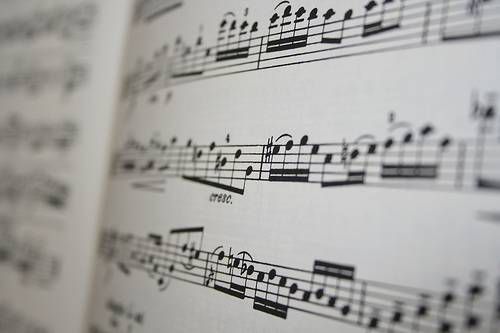 This is a guest post from Cariwyl Hebert. Cariwyl is the founder of Salon97, a San Francisco-based non-profit that makes classical music approachable to the uninitiated. When she’s not showing folks across the country a *really* good time at her classical music salons, she immerses herself in the world of search engine marketing and social media consulting. Cariwyl is also a fervent fan of discovering the best cocktails around, watching movies with her husband, reading books about anything and everything, going on long walks, and making up for it later by meeting up with friends for a trip to one of the many restaurants on her to-do list. Follow her on Twitter @salon97.

Book Riot’s February Rioter in Residence, Kevin Smokler, (who also happens to be my husband) was new to classical music when we met six years ago. In fact, he was pretty scared of it. But now, after numerous classical concerts and Salon97 events, he really digs it. So much so that classical music played a huge role in his writing process for his new book, Practical Classics: 50 Reasons to Reread 50 Books You Haven’t Touched Since High School.

Kevin utilized his various playlists to evoke time, place, and feeling in Practical Classics. His musical selections will surely make for great listening while you read his essays and correlated literary masterpieces; this guy is all about context!

Walt Whitman’s Song of Myself

Songs of Myself evokes expansive soaring vistas—Walt Whitman never met a soaring vista he didn’t like—and 19th century American scenes, which reminded Kevin of Aaron Copland, (aka “The Dean of American Composers”) one of his favorite composers. Though he absorbed several of Copland’s compositions while writing this essay, the two that correlated the most to what he saw in Whitman’s writing were Rodeo and Lincoln Portrait.

Though William Grant Still’s career began over 30 years after The Adventures of Huckleberry Finn was written, Kevin felt that Still’s music captured an older and more fabled time redolent of Twain’s writing, and that both Still and Twain embodied a sagely nostalgia in their work.

We all know Vangelis. Chariots of Fire, anyone? Vangelis’ penchant for synthesizers (yes, hello, it was the 80s) are something Kevin just loves, so writing about Dick’s novella was a great excuse to bust out the 80s soundtrack.

You may find this soundtrack difficult to listen to on its own, but it certainly will set the tone for Do Androids Dream of Electric Sheep. Vangelis’ use of synthesizers is ironic in this sense, as Blade Runner depicts a very strained relationship with advanced technology.

Maus is a contemporary classic graphic novel about the father of the author’s experience during the Holocaust. As such, the story deals heavily with death, sadness, and forgiveness.

Chopin’s Funeral March is one of the most recognized musical representations of death and despair and has been used repeatedly to signify death in video games, cartoons, and movies.

Accompanied by: Beethoven’s Ode to Joy

No matter what genre of music Kevin is listening to, he loves loud music that makes a bold statement. Beethoven’s Ode to Joy chorus, found at the tail end of his glorious Ninth Symphony, is about as big and bold as they come. Nearly all triumphs in Kevin’s life are marked by a listen or three of the Ode to Joy chorus, and the completion of writing this book was no exception.

Perhaps it will make a good listen for you too, once you finish reading his collection of essays and the 50 books they accompany!