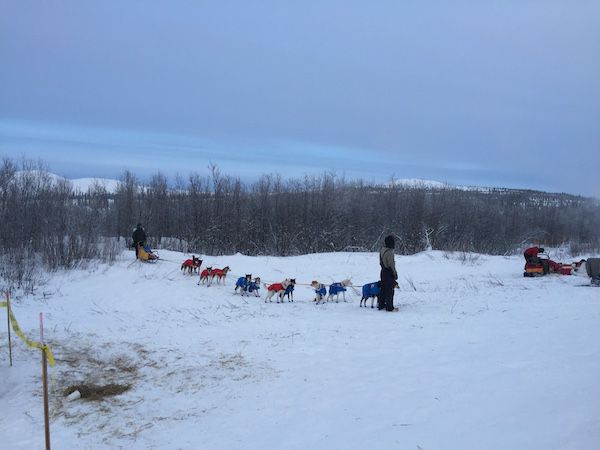 What do you do when you unexpectedly run into an author and celebrity you didn’t expect? Try to remember to bring a pen, at the very least.

The Yukon Quest, is a ~1,000 mile dogsledding race between Fairbanks, Alaska, and Whitehouse, Yukon Territory. While it may be less well-known than the Iditarod, it’s considered by many to be a tougher, more challenging race. My friend and I had driven from Fairbanks to the first four checkpoints in rural Alaska before the race turned inward and roads did not connect to the additional checkpoints. 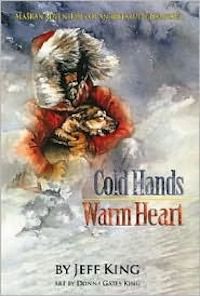 I had picked up books by famous mushers for the trip. What better way to deepen the experience but by reading the words of these legends of the sport? I had two mushing books, Jeff King’s Cold Hands, Warm Heart: Alaskan Adventures of an Iditarod Champion and Jim Lanier’s Beyond Ophir. On a whim, I started with Cold Hands, Warm Heart. Jeff King has been called “the Winningest Musher in the World” who is a four time Iditarod champion and one time Yukon Quest winner. The book was funny and insightful, a perfect companion to the trip.

At the second checkpoint, known as Mile 101, which was really a few structures and a trailer in the middle of the Alaskan wilderness, I ran into Kate Underwood. She was there supporting her son, Sean Underwood, on the shorter race, the Yukon 300, a 300 mile race. And to my astonishment, she told me that Jeff King was also there supporting her son, who normally handles for King.

Handlers are people who facilitate in the training of the dogs along with the musher. Many mushers learn the art and science of dogsledding by being another musher’s handler. During the race, the handlers drive the dog truck that contains the supplies to the road accessible checkpoints as well as providing moral support (like reminding mushers of their own name thanks to the incredible sleep deprivation and physical exertion they go through).

At the same checkpoint, I ran into King’s handler, Martin Early, a New Zealander, who I also told about the coincidence of reading the book. He suggested that I ask him to sign it but I demurred, as the book was already signed to someone else: “To The McKinleys Happy Trails 2014” (I often buy books secondhand if I can’t get them at the library). He thought this made it even better.

I couldn’t bring myself to go up to this legend and ask him to sign my secondhand book already inscribed. But word got around to King that there was a woman there with his book, thanks to the handlers. They kept suggesting that I had to have him sign it; after all, it would make a good story.

My travel companion even met King; they had parked the truck behind our car and she happened to meet him. Again, the story came up of my book.

Asking for a Signature

So after dragging my feet, I finally went up to him and asked him to sign my book. Well, that suggests I asked a cogent sentence. It was more like: “Hi, I’m Elisa. I’m the girl with the book you’ve heard about. Wouldyoupleasesignmybook?”

Thankfully, he could infer my meaning. He grabbed a Sharpie and asked my name. I told him but sheepishly told him the book was already signed.  He found the BLANK page and signed it: “To Lisa, Second time around! Happy Trails.” He said it was flattering.

I thanked him profusely. And now I have my double signed book by Jeff King.

I finished the book on my long journey home from Alaska. It made me laugh, it made me cry (not for the reasons you’d think). But that book will now have a special place in my heart at this unexpected and embarrassing moment for me.

And yeah, it was worth it all to get the story.

So should you find yourself encountering an author who you admire, try to calm down, ask like a human, and for goodness sakes, remember to bring a dang pen.