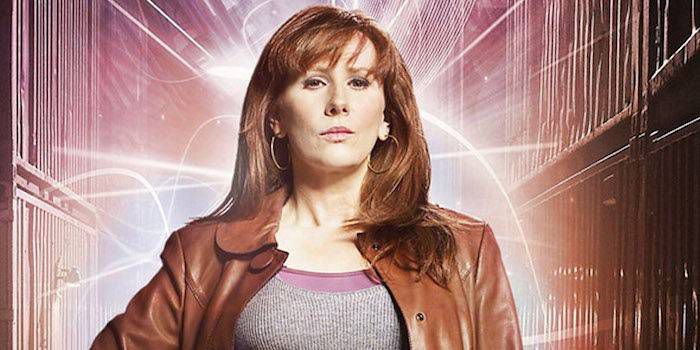 Jenn Northington: Welcome to Panels, Alisha! I have thoroughly enjoyed several of your books and am most evangelical about Night Whispers, because “zombie apocalypse plus romance” is my jam. (No one is surprised to hear this.) I recently discovered you have feelings about Doctor Who and the plight of his companions, which I am very excited to explore. But first! What’s your overall history and experience with Doctor Who?

Alisha Rai: Thanks for having me! I started watching Doctor Who a few years ago when I desperately needed a new show to glom. I was confused by the first episode, intrigued by the second, and then somehow in the space of a few months I found myself caught up and owning Doctor Who LEGO sets and wishing I could cosplay as the Tardis.

Jenn: Let’s talk companions; I know you have a lot of love for Donna in particular — one of the (few? only?) companions who was never in love with the Doctor.

Alisha: Donna is my girl. She’s funny, vulnerable, tough, has a difficult mother and a weakness for beautiful men. I mean, please. Donna and I could go out for drinks tomorrow and you’d probably never see us again because we’d be best friending it up somewhere awesome.

In another person’s (my) hands, Donna would make an excellent romance heroine. Look at her arc:

Chapter 1: She’s outwardly brash and cocky but internally a little vulnerable and insecure about herself and her place in the world.
Chapter 2: She has a taste of excitement. It’s a one-time thing! She can totally go back to her humdrum life.
Chapter 3: Oof, that was a lie. MORE EXCITEMENT PLEASE.
Middle Chapters: She gains confidence with every step she takes. She becomes best friends with a man who pushes her out of her comfort zone. She falls in love. She realizes that she’s the MOST IMPORTANT WOMAN IN THE WORLD and essential and strong and the universe needs her, damn it.
The Final Chapter: She lives happily-ever — oh wait. Oh wait. What the &^@# just happened.

That ending, man. That ending GUTTED ME and almost made me quit the show. Donna’s arc was tied up in making her wake up and realize that she, a seemingly ordinary woman with an ordinary life, was special. To take away the memories that made her come to that realization, to take away her memories of love found and lost, and her confidence in how wonderful she is — without her consent — is such a cruel ending for a character who, up until that point, blossomed by gaining agency.

Let’s put this show back in my hands, shall we? Fine, fine, we can leave her “ending” as it was. Memory wiped. Married to Joe Schmoe. Lottery winner. Bleh.

Fast-forward to 2016, and, um, SOMETHING happens (we’ll work this out in edits) and the Doctor and Donna are reunited! Blah blah blah aliens, and she REGAINS HER MEMORY.

Oh hey, who’s that? The guy from the Forest of the Dead, the man she fell in love with when she was saved to the weird computer girl hard drive? The dream husband she missed finding IRL by mere seconds? They kiss! Soaring music! *hearteyes*

(Of course, the reunion with her lost love is nice and all, but her real HEA is in remembering how cool she is.)

There. Now you see? The problem with Donna’s ending is that the showrunners gave her a black moment instead of an ending. For the love of God, epilogue this girl up.

Jenn: And then there are companions like Martha, who both was into the Doctor and managed to recuse herself on her own terms.

I feel like Martha’s time with the Doctor was her prologue, the part of the book where she made mistakes and learned from them. I liked her when she was a companion. I LOVED her when she struck out on her own. Again, if I ran the world, there would have been a show starring Freema Agyeman kicking butts and working with UNIT like ten minutes after I had the idea that she should kick butts and work with UNIT.

Unlike Donna, I approve of Martha’s final appearance on the show. Happily saving the world and seemingly content with her life? Fine. FINE. Well-played.

Jenn: Where do you think we’re headed next for companions and the Doctor?

Alisha: (I think maybe I answered this above. Catherine Tate, help a girl out).

I’m kind of confused by recent seasons, so I have no idea where we’re headed. I really like Capaldi and I wish all the best scripts and a more, um, coherent storyline for him.

Post-Capaldi, I am eternally lodging my request for a girl Doctor. Plllleeeease. We’ve waited far too long!