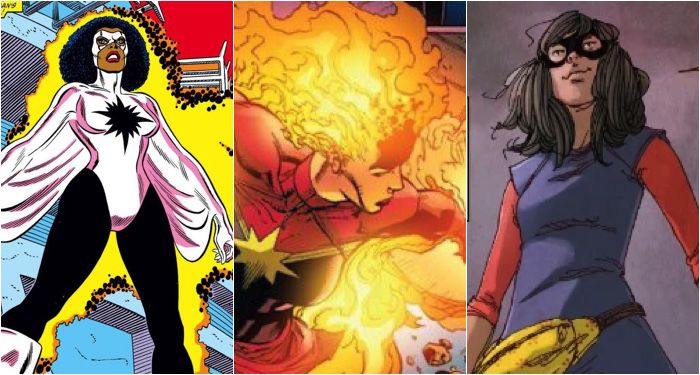 I say “a few” because there are way more Marvels than you might expect if you haven’t read the comics. If I tried to cover every single one, we would be here all day. So I decided to limit things to Kamala Khan, Monica Rambeau, and Carol Danvers, since they are the apparent stars of The Marvels, currently due for release in November 2022. As it is, you might want to grab a drink, because hoo boy, you are in for a time.

Okay, here we go: time to identify who’s who in Marvel’s Marvel “family” of heroes!

The first person to use the name Ms. Marvel is Carol Danvers, who acquired her powers by accident. The original Captain Marvel, a Kree warrior named Mar-Vell, saved her from being killed by a Kree weapon. In the process, however, Mar-Vell’s DNA grafted onto Carol’s, turning her into a Kree/human hybrid with all of Mar-Vell’s powers: flight, super-strength, durability, and a “cosmic awareness” of things that were happening throughout the universe. (Think of it as a juiced-up version of Spider-Man’s spider sense.) This page from her debut in Ms. Marvel #1 in 1977 nicely shows off her range of powers and also her terrible, terrible wardrobe choices.

The hitch was that Carol couldn’t remember her superheroic activities. “Ms. Marvel” was like a whole separate personality that would come out in times of danger.

This wasn’t the end of Carol’s mind problems. Years later, Rogue accidentally stole her powers and her memories, leaving Carol at a loss. She hung out with the X-Men for a while and ended up kidnapped by an unsavory alien race that tortured her until she developed new powers. These powers included the ability to manifest energy on the level “equivalent to a star.” She began calling herself Binary soon after.

Carol was now more powerful than anyone, but this didn’t last: she drew her power from a white hole, but when it destabilized, she ended up back at her old power levels. Her powers continued to fluctuate for years, as did her mental stability (she’s struggled with alcoholism) and her codenames (after Binary, she became Warbird and then Ms. Marvel again before finally taking the name Captain Marvel). She eventually regained her original powers (again), and that is still more than enough to make her one of Marvel’s most formidable heroes. She can also temporarily boost her powers by absorbing energy from other sources.

Monica Rambeau is Also Captain Marvel (or Used to Be)

Monica Rambeau’s origins as Captain Marvel have some surface similarities to Carol’s in that they involve a machine exploding. At the behest of a family friend, Monica tried to help him stop a dictator-funded scientist from perfecting a device that could destroy cities. She smashed the control panel, and when the machine exploded, she suddenly found herself with the ability to turn her body into any form of light, from x-rays to radio waves. Monica can also send out blasts of light, either to attack others or as a sort of scout to see what’s going on in places that she can’t reach herself.

Briefly, Monica’s powers threatened to overwhelm her and cause her to explode, taking New York with her. Fortunately, she was smart enough to get help from the right people. As soon as the Avengers stabilized her, they invited her to join them, which she did.

Incidentally, Monica acquired the “Captain Marvel” name by accident: that scientist she defeated called her something similar, and the press latched on. Monica has changed names several times: first to Photon, after one of the Vells raised an objection; then to Pulsar, after one of the Vells stole the Photon name; and finally to Spectrum.

Kamala is a teenager of Inhuman descent whose powers remained latent until she was caught in the Terrigen bomb. (The Inhumans are the descendants of ordinary humans who were experimented on and given powers by the ancient Kree. The Kree sure get around, don’t they!) Rather than hurting anyone, this bomb activated the latent Inhuman abilities in people like Kamala. Kamala’s first act? To accidentally shapeshift into her idol, Carol Danvers!

Kamala soon learned to control her powers and designed her own costume, but she kept the name Ms. Marvel.

Kamala’s powers are very different from those of any previous Marvel: she can change her size and appearance at will. Mostly, however, she changes only one part of her body at a time — for example, “embiggening” her hand to scoop a drowning girl out of the ocean. Also, while she is not invulnerable like Carol, she does have an accelerated healing ability.

Despite sharing similar names, none of the Marvel women started out working together. However, it was only a matter of time before they met and, for the most part, they all like each other. (That said, Monica was not amused when Carol took the name Captain Marvel without consulting her first. Can’t blame her, what with all the other Marvels have put her through, name-wise.)

In the Marvel Cinematic Universe, things worked out slightly differently: Carol was friends with Monica’s mother, Maria, and has known Monica since she was a child. How Kamala fits into this relationship is not yet known: she will not make her MCU debut until later this year. We will also have to wait to see the exact power set she has and how well she plays with the older Marvels. Will they be allies right away, or will we have to sit through a Ms. Marvel vs. Captain Marvel battle royale first? We can only wait and watch…