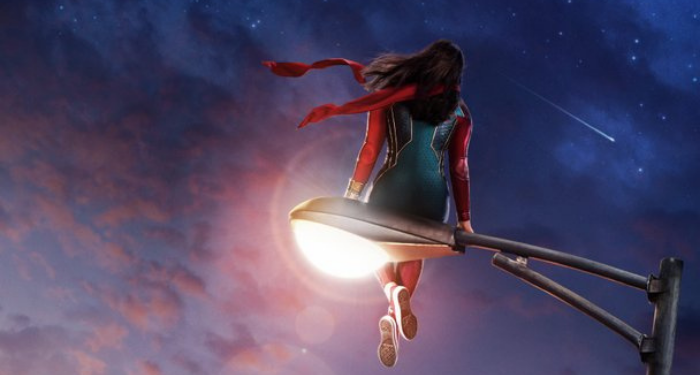 The first trailer for the new Ms. Marvel Disney+ show dropped today, and it looks to be epic. The show stars Iman Vellani as Kamala Khan, the eponymous superhero, who gains stretching powers and becomes Jersey City’s newest hero. And based on how well Disney+ has done with their streaming series so far, from WandaVision to Hawkeye, I’m pretty confident Ms. Marvel is going to be another home run.

Who is Ms. Marvel?

The title of Ms. Marvel has belonged to a number of superheroes throughout the years, most notably Carol Danvers–now Captain Marvel–and now, Kamala Khan. Kamala is just a regular Pakistani-American teen living in Jersey City, writing Avengers fanfic, until one day she’s exposed to Terrigen Mist and gains superpowers. She gains the ability to polymorph and stretch her body in almost any way imaginable, embiggening herself or stretching her limbs to take down bad guys.

Watch the trailer for yourself, and then let’s break down what we learned about the upcoming series.

So, what did we learn from the trailer?

In G. Willow Wilson’s original Ms. Marvel, Kamala sneaks off to a party with her friends shortly before gaining her superpowers. But in the Disney+ series, it looks like Kamala will be heading to a superhero convention, AvengerCon, alongside her best friend Bruno, dressed as her favorite Avenger, Carol Danvers AKA Captain Marvel. See, there’s a reason Kamala takes up the mantle of Ms. Marvel specifically, and it’s because it used to belong to her favorite superhero.

Comic book Ms. Marvel is an Inhuman, a race of superhumans we’ve seen before in both the Agents of SHIELD TV show and the short-lived (and universally panned) Inhumans series. Inhumans gain their abilities from being exposed to Terrigen Mist, and their powers vary greatly from Inhuman to Inhuman. In the comics, Kamala is exposed to a Terrigen bomb and develops her polymorph abilities before eventually learning more about her Inhuman heritage.

While it’s unclear exactly how Kamala gains powers in the Disney+ series, there are definitely going to be a few differences. First, it appears that Kamala will be using some sort of wrist cuffs, though it’s not entirely clear if those are connected to her powers or simply part of her costume. In the trailer, Kamala is also shown projecting energy bursts from her hands, an ability she doesn’t possess in the comics. It’s possible–especially given the digital effects used–this ability is meant to more closely connect her to Carol Danvers and Monica Rambeau, with their energy-related super powers.

I’m excited to see how these changes pan out, especially since they look to be very cinematic. But I do hope they won’t make Kamala too over-powered.

Comic book Kamala gets a whole lot of team ups throughout her series, from her initial meeting with Captain Marvel to missions with Wolverine and Spider-Man. It doesn’t look like we’re going to be getting any big name cameos in the Disney+ series (unless they’re saving a surprise Brie Larson drop-in for later), but that doesn’t mean Kamala isn’t going to have some interesting heroes and villains to contend with.

Behind the scenes pictures and set rumors indicate that one of the big threats Ms. Marvel may be going up against is an organization known as N.I.C.E., a new-to-Marvel organization that detains Inhumans. It seems like they may be one of the big obstacles for Kamala as she comes into her powers.

But Kamala will also have some allies on her side, since at least one of her comic book counterparts has been cast in the series alongside her. Red Dagger is a Pakistani superhero Kamala meets on a trip to visit her family. He’s being played by Aramis Knight in the new series, so we know Kamala won’t have to face all these baddies on her own– even though she totally could.

It also looks like they’re going to be doing some cool mixing of live action and comic-style animation, which I think is perfect for the Avengers-obsessed Kamala Khan. Should add a really fun, retro comic book flair.

All in all, I think the trailer shows we’re going to be in for a real treat with Ms. Marvel.

Want to learn even more about Ms. Marvel before the Disney+ series airs in June? We’ve got a primer on Kamala Khan’s Ms. Marvel as well as a breakdown on the differences between Ms. Marvel and Captain Marvel.