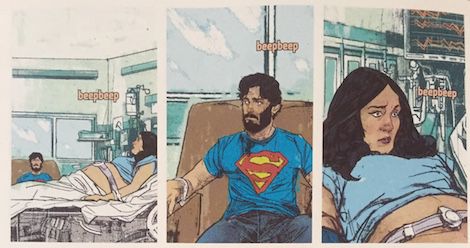 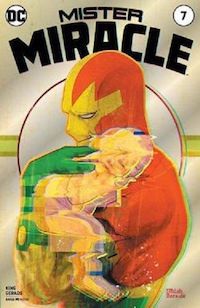 Childbirth. Even if we’ve never been through it, we’ve seen it, a lot. Screaming, sweaty women in books, in comics, on television and in the movies, giving birth in various ways: to comic affect in taxi cabs, surrounded by serious doctors with furrowed brows, or giving birth to messiah-like children for plot reasons.

We see birth a lot, and it almost never looks like the real thing.

Which is why I had a visceral response to the latest Mr. Miracle. The book, which sees Big Barda strapped to the monitors in a maternity ward, contractions four minutes apart, is an accurate depiction of contemporary childbirth. The waiting. The beeping that drives you nuts until it stops. The discomfort. The being mostly alone, with doctors and nurses stopping in to call you “mom” (which is weird if you’re delivering your first child and have never been called “mom” in your life). The people who show up in the waiting room, unable to come in, but feeling like they have to be there. The wanting to go home and knowing you can’t.

It was done so well. It was just like the real thing. But here’s what grated on me: it was the real thing from a male partner’s point of view. Mister Miracle is a fabulous book, but it’s written, drawn, and lettered by guys. This was a dad’s perspective of childbirth, even if sometimes the art made it look like we were in Barda’s head. Scott can get up and walk around. Scott is very concerned for Barda, but isn’t experiencing the contractions himself. Scott ultimately is the one who performs the heroic act in the book, saving his family. Later, he offers the same pat praise we hear from all dads in fiction after childbirth: “she’s so strong.”

Of course she is. She is Big Barda. She was raised in a slave pit and once fought Wonder Woman to a draw. As one of the Furies in the waiting room points out, strength is kind of her thing.

I get that it’s Scott’s book—it’s called Mister Miracle, after all—and the baby has to be born. What bothered me was the choice to show childbirth at all, if it was going to be done from Scott’s point of view. Childbirth is a big event for the whole family, to be sure, but the central character in childbirth is the person going through it. Barda is a seven-foot warrior who single handedly killed a huge canonical enemy earlier in the book. What must it be like for a Fury to be strapped, helpless, to a hospital bed, trapped by the monitor and her own contractions? What inner battle is she waging as her body turns itself inside out? How useless does a warrior feel when she becomes an object to the medical staff—something to be checked and turned over once in a while?

Mister Miracle #7 is a good book—and Mister Miracle is excellent as a whole—and it did the best it could with a cis male perspective on birth, but I am tired of seeing birth from the point of view of the dad, who has somewhat less skin in the game. And I found myself bristling at Scott being the hero of this particular issue in a way that you’d think Barda, a general in her own right and a consummate planner (who tells us she’s read all the baby books), would have anticipated and provided for.

A dad’s perspective on childbirth is fine, and Mister Miracle does it very well, but I want more from childbirth scenes in my fiction. Clearly birth is fascinating to creators of all genders, or we wouldn’t get so many depictions of it. But if childbirth is so fascinating to male audiences, maybe we should give everyone a closer look, and show it from the other side of the monitors.