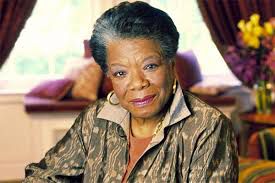 This is a guest post by Maya Payne Smart. Maya is a globetrotting writer who enjoys food trucks, toddler art and college basketball. She has a 92-year-old house, a bionic knee and a vivid imagination. Live from Richmond, Va., she writes about books, dynamic women, and the pursuit of happiness, meaning and productivity on her blog at MayaSmart.com. Find her on Twitter @mayasmart.

go down its trackless wastes,

salt my tongue on hardened tears

for my precious dear times waste

along that promised cave in a headlong

Our hero, poet/memoirist/sage Maya Angelou has died. We mourn her openly.

A friend sobs on a train to D.C.  She has a meeting at Howard, but thinks they’ll understand.  Another rereads the departed artist’s work aloud and writes a poem in her honor.  Me? I seek her restlessly, plundering my shelves from basement to attic for a glimpse of her, startled by the multitudes I find.

There are Hallmark greeting cards bearing her words, Oprah appearances on DVD and a wooden commemorative box holding her 1993 inaugural poem for President Clinton, in print and on cassette tape.  And there are books–volume upon volume of autobiography and poetry, although the categories can scarcely capture her genius.  Her words, in any form, hurtle off the page with evocative precision and personal resonance.

I’ve grown in the indirect light of her sun forever, but seeing my lifetime’s Angelou collection strewn across a single table impresses me with its magnitude.  I realize for the first time the role Angelou played in raising me.  Through her poetry, omnipresent and wise, she gave me a language of ascension. A vocabulary of resilience.

Out of the huts of history’s shame
I rise
Up from a past that’s rooted in pain
I rise
I’m a black ocean, leaping and wide,
Welling and swelling I bear in the tide.

Through her stories of self invention and reinvention captured in her numerous autobiographies, she gave master classes in attentive living and assiduous writing. For me, the lessons began with “I Know Why The Caged Bird Sings.”  My copy is a first edition of the 1969 instant bestseller, passed down from my mom.  The seminal work resonated so strongly that years after its publication my mom looked upon her newborn girl and named me Maya.

On its back cover, a pensive Angelou, writ large, averts her eyes and bows her Afro’ed head toward the text of her bio.

During the busy years following the childhood described in this book, Maya Angelou studied dance in San Francisco and toured Europe and Africa for the State Department in Porgy and Bess.  She taught dance in Rome and Tel Aviv.  In collaboration with Godfrey Cambridge, she produced, directed and starred in Cabaret for Freedom at New York’s Village Gate; she also starred in Genet’s The Blacks at the St. Mark’s Playhouse. At the request of the late Dr. Martin Luther King, Jr., Miss Angelou became the Northern Coordinator for the Southern Christian Leadership Conference.  From there she went to Africa, writing for newspapers in Cairo and Ghana.  She has written and produced a ten-part TV series on the positive African issues in American life.  She now lives in New York City.

A bio like that (full of beauty and art and activism) on the back of an autobiography like hers (born of a particularly desperate Southern black girl tumult) is redemption incarnate.  It reminds me of the Angelou quote that sits framed on my tub deck–“Surviving is important. Thriving is elegant.”

And it brings me to the simple inscription that she wrote in a book of her poetry that was given to me in high school: “Joy!” So even on this day of mourning, surrounded by her works, I’ll strive for the grace to give joy the final word.