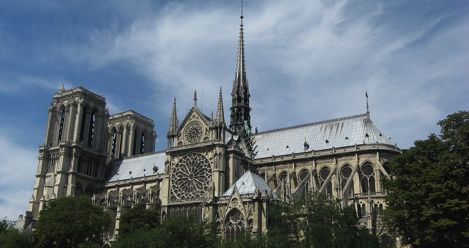 I can’t believe it. Neither can most of the contributors on Book Riot. We are mourning a loss as fire has devastated Notre Dame, a historical church in Paris, on April 15. Renovations led to an electrical fire, which led to the roof coming down and several glass-stained windows blown out. Fortunately, the Parisian firefighters contained the blaze, saving the structure, and people had moved the relics earlier because of the renovation.

It’s very ironic that this church was saved by a book, only to burn from a minor accident. As Lindsay Ellis’s video discusses, regarding The Hunchback of Notre Dame and its adaptations, Victor Hugo wrote the book to save the church. Otherwise, due to its disrepair, it would have been torn down and replaced.

Note that for this article, I’m using the term “Gypsy” in quote because it is a racial slur. Romani is the proper term.

If you are going to read the original book Notre Dame de Paris, keep in mind that Victor Hugo was kinda racist. It starts with “Gypsies” kidnapping a perfectly healthy baby and replacing it with another, who is abandoned at the bell tower. Clopin is also a murderous leader who lays siege to Notre Dame to protect Esmeralda from the troops. Not the most flattering representation.

Then we have Frollo and Quasimodo. Quasimodo is born with physical deformities, and the bell-ringing has made him deaf. Neither are portrayed that sympathetically in the books, though Quasimodo protects Esmeralda when she’s framed for murder.

Yeah. Even so, the book struck people’s hearts with how Notre Dame was more than a place. It had life, as much life as the people running amok in it demonstrated. And it struck a chord with people. Soon it would strike a musical chord as well.

I first learned of Notre Dame as a kid, from Disney. The film was released when I was a kid, and I asked my parents to take me to it. In hindsight, this is why the creators shouldn’t have aimed for a PG rating, because I was too little to understand.

Hunchback takes many liberties with the source material, but I argue they improve on it. Rather than have Frollo as a corrupted religious archdeacon that can’t keep it in his pants, he serves as a minister of justice who embarks on genocide to match his warped worldview. To emphasize this, he chases down a woman in cold blood and murders her for trying to save her baby’s life. The local Archdeacon has to tell him he must raise the child to atone for his sin. Frollo does, and Quasimodo, despite this traumatic upbringing, is kind to any living creature.

Esmeralda is also Romani, and not naive. Instead, she takes the approach that one must right wrongs, even when it puts her life in danger. Frollo hates that she defies him, and yet that she is an attractive, nubile teenager. Cue one of the best villain songs that is strangely prophetic about the news, about how Esmeralda will burn.

Obviously, I didn’t get any of this as a kid. Instead, I had to rewatch it in college to understand this was a movie about the difference between lust and love: when you lust after someone, you don’t care about their ability to consent. You only want them, and that feeling consumes you. To symbolize this, Esmeralda appears in the flames, not as a person to Frollo but as an ephemeral “witch.” Ironically he calls out to the Virgin Mary, who was also a refugee girl once, to help him.

Frollo swears to burn down all of Paris to find Esmeralda. Note that he doesn’t have to burn anyone; he makes the choice. Then he blames it on Quasimodo, and says Esmeralda being kind to his adoptive son was cunning, not kindness. By this point, Quasimodo doesn’t buy it, but his fear of Frollo conflicts with his courage. By the climax, all the Parisians are revolting when he finally lays siege to Notre Dame, after Quasimodo rescues Esmeralda and claims sanctuary for her. For the first time ever, Quasimodo fights against his adoptive father, defending the church with everything he has.

On the surface, it seems that Disney’s fictional Frollo got the last laugh. Notre Dame did burn. There are more cruel people that use their sanctimony to commit genocide. And the world seems to have become scarier.

But Notre Dame has burned before, and it has been rebuilt. We can’t replace the exact windows or the spire, but we can add something new to the something old that has remained. And we can remember why the old and new versions of the story work, why we remember them.

Victor Hugo once saved a church. Disney saved a story. We can save so much more. Notre Dame lives to serve Paris another day.