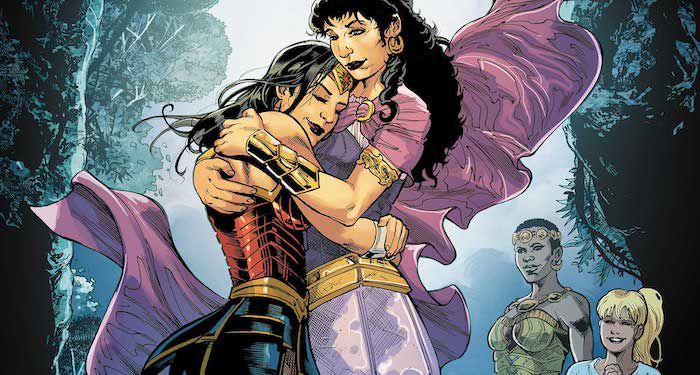 Another Mother’s Day has come and gone in America. (If you’re in France, it’s not too late! Go buy some flowers!) It got me thinking about the mighty mothers and mother figures who raised and inspired our favorite heroes. This didn’t take long, because there aren’t a whole lot of them.

Some of the most important relationships in comics are between fathers and sons, to the point where some heroes have more than one father figure. Superman has Jor-El and Jonathan Kent. Batman has Alfred Pennyworth and Thomas Wayne. Spider-Man has Uncle Ben. And that’s not getting into heroes like Iron Man and Thor, whose daddy issues are a part of their characters. Sure, these characters also have mothers, but they are traditionally sidelined to give more room to the father-hero relationship (except, arguably, Spidey’s Aunt May, but his hero’s journey is far more entwined with his deceased uncle than his living aunt, and Ben is the one who gets the iconic line about power and responsibility).

Why is that? In his book Batman and Psychology, Travis Langley suggests it is due to stereotypical gender roles. “Grown sons want their fathers’ acknowledgement and their mothers’ nurturance,” he writes. He later adds, “Sons may not feel the same need to stand up to their mothers to establish who they are and redefine their relationships. Sons’ self-concepts tend to have more to do with their dads, even absent dads, than with their moms.”

In other words, men have a burning need to prove themselves to their dads, and because most superheroes are men, father-son relationships receive greater prominence. Also, if you’ve watched any sitcom ever, you’ll know that men with close maternal links are often demeaned as wishy-washy, impotent, and undesirable: the opposite of what a superhero is supposed to be. My own amateur research seems to bear all this out, as most prominent mother-hero relationships I could find involve superheroines, not superheroes.

And again, this is all based on stereotypes, as Langley himself emphasizes. But they’re stereotypes that have traditionally defined the superhero’s journey, so they’re important to keep in mind as we embark on a whirlwind tour of a few super-mothers who have received a spotlight, however small, of their own.

Sliding timescales — that is, superheroes having to remain roughly the same age no matter how many decades they have existed — eventually led to Black Canary becoming her own mother: the ’40s version of Black Canary, Dinah Drake, was retconned to be the mother of Dinah Lance, the version from the ’60s and beyond. This is actually pretty interesting, as it marks a rare instance of a daughter following in her hero mother’s footsteps.

Drake, however, was often less than supportive of Lance’s heroic ambitions and overly wrapped up in her own. This caused a rift between them — first when Drake was so obsessed with heroing that it caused her to neglect her family, then when Lance began her own career behind her mother’s back. They eventually made up right before Drake died of cancer.

Aunt May isn’t Spider-Man’s biological mother (except in one ill-advised series from 2003, but let’s leave Trouble in history’s dumpster where it belongs), but anyone who says she didn’t mother the heck out of him is clearly unfamiliar with the franchise.

Despite raising Peter, May was traditionally depicted as a helpless, fragile old woman who needed Peter to protect her, undermining her status as a parental figure. There are a few exceptions to this rule — like the time she knocked out the Chameleon with drugged cookies, or when she told Wolverine where to get off with his early-morning smoking and bad attitude.

Libby Lawrence was the original Liberty Belle, a World War II-era hero. She then married fellow hero Johnny Quick, with whom she had a daughter, Jesse. Jesse would end up using both her parents’ codenames during her career: first she became the super-speedy Jesse Quick, then the new Liberty Belle — even though Libby, much like Dinah Drake, was not always keen on her daughter being a superhero.

But that’s not the fun part. At one point, Libby became engaged to a much younger man, who was later murdered because he was cheating on Libby…with Jesse. Cue the soap opera music!

Perhaps the most powerful super-mother of them all, Hippolyta is a fierce warrior queen who has led her Amazons for thousands of years. But she is also a protective mother. She banned daughter Diana from participating in the competition to decide who would represent Themyscira in Man’s World and was none too happy when Diana sneaked in anyway (and won).

Nonetheless, Hippolyta has always been there whenever Diana needed comfort or words of wisdom…except for those times when she’s brainwashed into fighting her, but hey. Happens to the best of us.

Incidentally, Hippolyta may well be the first super-mom to play a role that wasn’t dying, so good for her.

Roberta debuted by promising to help alcoholic ex-millionaire Tony Stark and threatening him in the same breath. The woman fears nothing.

It’s not surprising Roberta is so tough: she had to raise her son James (“Rhodey” to you) all by herself, and he was quite the handful. He got sent to juvie twice in a row because he couldn’t stop defending other kids from bullies. Roberta doesn’t exactly approve of all this heroing, but she always stands up for him without question or hesitation, and she always gives him the love (and weaponry) he needs to do his job.