In 1987, Alan Moore and Dave Gibbons created the most celebrated graphic novel ever in Watchmen. It’s fantastical fiction but remains relevant today for a variety of reasons. I may be overthinking its premise but when I think of current events, I quickly reference back to Watchmen. Sounds crazy? Let me quote something written in Wired Magazine earlier this year:

“Watchmen depicts New York City (and, by extension, America) as a ravaged, ready-to-pack-it-in loony-toon town beset by all sorts of dangers, from social-engineering sociopath billionaires (oh, hey, sounds kinda familiar) to hysterical, chaos-churning far-right news outlets (that, too) to a frowny, jowl-gestating US president with a team of suspect advisors and easy access to nukes (gulp).”

Written during the Cold War when tensions between Russia and the United States seemed to be calming down a bit, Watchmen poked fun at this seemlessly never-ending war between two countries who were quick to threaten the other with nuclear war. As the world is tearing itself apart, only The Comedian and Rorschach seem to see the world for what it really is: A joke! A punchline at the end of a good joke. To quote The Comedian: “Once you realize what a joke everything is, being the Comedian is the only thing that makes sense.” The atmosphere surrounding politics, fake news, and world affairs seems to solidify The Comedian’s comment, in my opinion. The world is in a downward spiral right now and it’s making Watchmen all the more relevant.

But Watchmen does more than just highlight nuclear war and a crazy president. “Watchmen also touches upon issues that are now staples of our news streams: sexual assault, media manipulation, mental illness, homophobia.” Today, sexuality, sexual orientation, religion, race, ethnicity, background, etc. are all being challenged in some way or fashion. It is definitely a pestilence that seemingly has no end. It’s as if Moore and Gibbons unknowingly predicted a future that at the time seemed somewhat impossible but has come to fruition as of late. But the scariest revelation of the book? The billionaire Adrian Veidt assuming he was the only one who could save the world from its imminent destruction. Sound familiar? 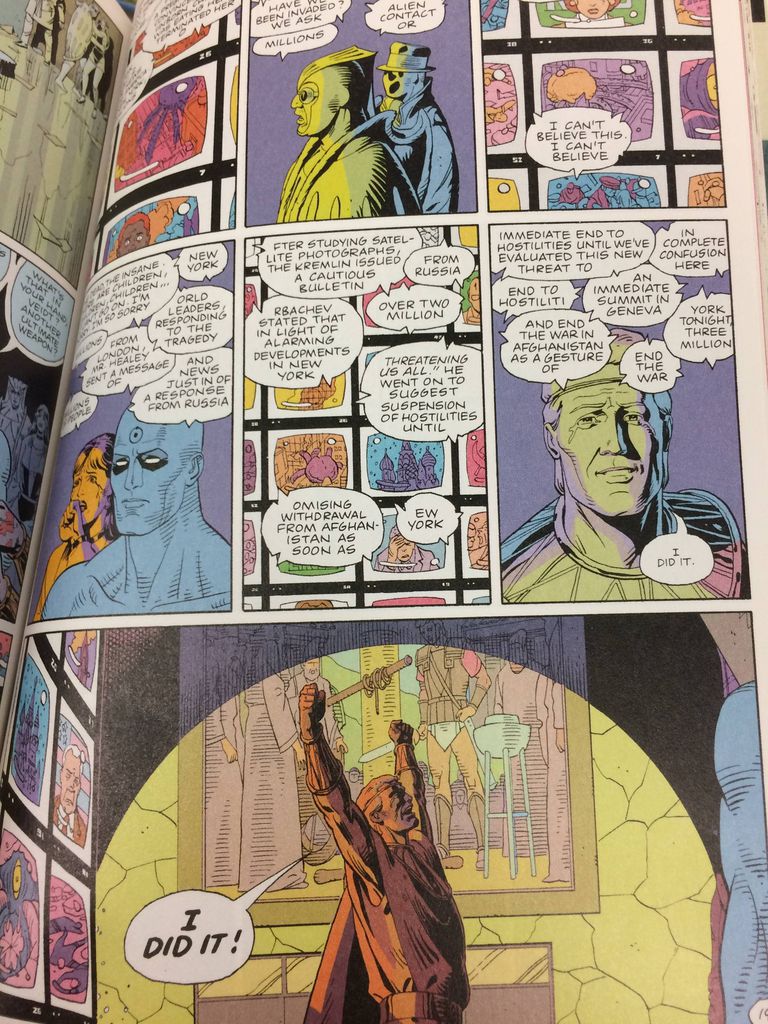 Every time I reread Watchmen, the story takes on new meaning. This is more than likely due to my age and deeper understanding of the world and events around me. But reading it this time leaves me feeling like it is more relevant today than it has been for quite some time. There are so many real issues that have been discussed recently and it is impossible to ignore that there are issues that cut deep. Can it all just be a joke, as mentioned by The Comedian? No. There is nothing funny about how accurate a fantastical graphic novel has become. But I will leave you with a joke:

“Heard a joke once. Man goes to doctor. Says he’s depressed. Says life seems harsh and cruel. Says he feels all alone in a threatening world where what lies ahead is vague and uncertain. Doctor says, ‘Treatment is simple. Great clown Pagliacci is in town tonight. Go and see him. That should pick you up.’ Man bursts into tears. Says, ‘But doctor…I am Pagliacci.'”