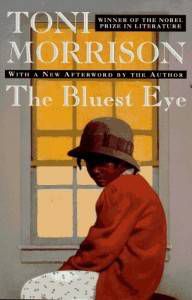 So, I’m re-reading my way through all of Toni Morrison’s novels in the run-up to our first Riot Reading Day on May 8th. If you’re thinking, “she’s insane,” you’re probably right. I love Morrison with many loves, but holy emotional rollercoaster, Batman! To document this experience, I’ll be sharing highlights of my notes and marginalia from each book. If you want to join this informal read-along (it has no official schedule) for any or all of the nine books, I’d love to have some company and to hear about your reactions, too.

Without any further ado, the first installment of Morrison Marginalia.* Needless to say, spoilers abound.

Pages 6-12: I’d forgotten how much Morrison tells us at the very beginning. The first ten pages aren’t labeled as a prologue, but they function as one. We know from the start that Pecola is pregnant with her father Cholly’s baby and that her father and the baby are now dead. We know that the narrator Claudia’s childhood was painful, but “it was a productive, fructifying pain,” and we know that Claudia thinks of that pain as par for the course, no more or less remarkable than any other child’s experiences.

Morrison introduces her themes early. On page 17, Claudia refers to her “peripheral existence” and to “being a minority in both caste and class.” So, we’re already talking about segregation of blacks and whites as well as segregation within the black community based on color (high yellow being preferable to deep black skin). On page 20, Claudia recalls that “all the world had agreed that a blue-eyed, yellow-haired, pink-skinned doll was what every girl treasured,” and Morrison’s theses about unattainable standards of beauty and the consequences of racial self-loathing take center stage. And she doesn’t let anyone off the hook–Claudia has gotten this message from adults in her own community, so from the start, we know that this isn’t just an indictment of white-on-black oppression.

Within the first section, “Autumn,” it’s clear that almost everyone is angry–filled with rage, in fact–and that no one feels they can direct their rage at the people who cause it. But it has to go somewhere…

42: About Pecola’s father Cholly’s abusive relationship with her mother: “Hating her, he could leave himself intact.” Misdirected rage, Exhibit A.

55: It’s no accident that the only people who treat Pecola humanely are the prostitutes everyone else considers “ruined.” They’re also the only characters who even approach being happy. Is this because they’ve accepted their social standing and rejected others’ assessments instead of internalizing them?

65: Boys on the playground taunt Pecola, and Morrison goes all out to describe “their exquisitely learned self-hatred.” There’s no pussyfooting around, no slow approach to a big reveal. Lesser authors would build up to this discussion. Morrison starts with guns blazing and proceeds to illustrate her point with increasing power.

74: Claudia reflects about why light-skinned Maureen Peal is considered beautiful while she is not. “The Thing to fear was the Thing that made her beautiful and not us.” That could be an incredible LAST line for a book, and we’re not even at the halfway mark. Oh, Toni!

91: Holy shit. I didn’t remember this part with Junior killing the cat and blaming it on Pecola. Hello, knot in my stomach. And hello, first real demonstration of Pecola as scapegoat.

99: Mr. Henry tries to touch Frieda (in that way), and now we have two adult men behaving inappropriately with young girls. I can’t decide why Morrison shows us this–how common are we supposed to believe sexual abuse is in this community? How common is it really? (NB: It comes up again with Soaphead Church near the end.)

109: Did Kathryn Stockett read this book? Morrison does in one scene (when Claudia and Frieda go to visit Pecola at the white home where her mother works) what Stockett took more than 400 pages to do, and she does it a hell of a lot better. (But it’s not like there was really any question, is it?)

114ish: Am totally befuddled by the format of Pauline’s flashbacks about how she met Cholly. The introduction of a new first-person voice one hundred pages into the book is confusing. Are these diary entries? Recorded testimony? Internal monologue? I have no idea. (NB: Morrison addresses this in the afterword and basically says that she regrets writing it this way. Good to know.)

133: Is it significant that Cholly’s father was named Samson? Probably. *googles Samson* Okay, clearly I should have paid for attention in Sunday School. I got nothin’.

148: We don’t really have a word for what happens to Cholly and Darlene out in the field. Morrison calls it rape in the afterword, and that certainly fits the emotion of the scene, but I also feel like it’s something different. Testament to Morrison that she’s identified something that is very real but which we don’t have a word for, and that she resists the urge neologize? I vote yes.

150: And now she brings it home. “Never did he once consider directing his hatred toward the hunters. Such an emotion would have destroyed him.” So Cholly hates Darlene, then he hates Pauline, and then, finally, he hates Pecola.

162: This scene (in which Cholly rapes Pecola) never fails to take me by surprise. It’s simultaneously restrained and unrelenting, and I really feel like I could throw up.

174: We meet Soaphead Church, and I finally remember how weird some of Morrison’s character names are. In this book, there’s also M’Dear. Down the line, we’ll meet Milkman Dead. Sethe’s not exactly a common one, either. Note to self: start a list.

205: Morrison has “mounted a series of rejections” for Pecola (her description, from the afterword), and we’ve seen character after character make her the repository for the anger and shame that result from the self-loathing they’ve learned from the world and don’t feel they can direct anywhere else. Seeing Pecola’s fall into madness–her utter destruction–Claudia remarks, “All of us–all who knew her–felt so wholesome after we cleaned ourselves on her.” And there it is. Probably the most transparent and literal statement of the thesis of any of Morrison’s novels.

Post-read gut check: That this is a debut novel is nothing short of stunning. Morrison packs more beauty and power into some paragraphs than other writers manage to create in entire books. And this is just the beginning! The Bluest Eye remains a solid introduction to Morrison’s themes of race, class, gender, and color. I’ll be excited to move on to Sula just as soon as I can breathe again.

*Page numbers refer to the 1994 Plume edition. Yes, the one with the Oprah’s Book Club logo on it. The college bookstore didn’t have anything else. And yes, I hate the thing and wish it were a peel-off sticker instead of an inlaid design.