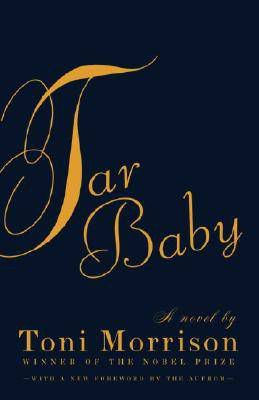 The Riot Reading Day for Toni Morrison is less than two weeks away, and I have miles (and 5 books) to go before I sleep.

When I first read Toni Morrison in a seminar in college, she had 8 novels out (Love had just been released), and my professor concluded that we only had time to read 7 of them in the 14-week semester. Two weeks per book is about right, and I wish I had remembered that when I set out to try to read all NINE of her now-extant novels in just 12 weeks. Insanity, I tell you.

Tar Baby was the book that got the boot from that class, so I’ve only ever read it on my own, and only once before. While there were moments in which I wished for academic notes during my reading, I also found it deeply satisfying to discover that I could encounter Morrison completely on my own and come out relatively unscathed. My notes from this reading filled seven college-ruled notebook pages. Here’s the condensed version.* Read previous installments of Morrison Marginalia here.

The epigraph, from 1 Corinthians 1:11, is super-interesting. “For it hath been declared unto me of you, my brethren, by them which are of the house of Chloe, that there are contentions among you.” This book is definitely about a house filled with contentions, but what really fascinates me here is that Morrison’s real name is Chloe Wofford, and I know Morrison well enough to know that this is no coincidence. What is she telling us about herself here?

The foreword is equally compelling. In the first paragraph, Morrison discusses storytelling and says, “All narrative begins for me as listening.” Later, she says that the novel “merged the primal and the contemporary, lore and reality.” Don’t worry, friends, I’ve already googled the original tar baby folk tale half a dozen times. We are ready to rock.

11: Valerian Street, what a name! And Margaret being known as The Principal Beauty of Maine? Fantastic. It is a truth universally acknowledged that odd names can distract readers and pull them out of the moment. Maybe I’m just attenuated to the fact that Morrison does this, but damn, she makes it work.

15: First mention of exile, a major theme of Tar Baby.

19: Valerian contemplates his reasons for retreating to L’Arbe de la Croix and notes that “everybody is conspiring to ruin it for me.” He says he wants peace and quiet, but his delight and amusement at discovering Son would indicate otherwise.

26: “It’s just that I’m undergoing this very big change in my life called dying” So melodramatic, Valerian, but so wonderful.

36: Ondine and Sydney talk about Michael and Margaret’s relationship, and Ondine tells Sydney, “He’s not the one who’s not natural. She is.” Hello, foreshadowing.

39: Reference to “one of them Marys” calls to mind the Deweys of Sula. Morrison presents othering and the notion that “they’re all the same” without putting too fine a point on it….yet.

48: ”…Sometimes I want to get out of my skin and be only the person inside–not American–not black–just me.” Issues of color and racial identity loom large in this book, so it’s worth noting that Jadine is the first light-skinned black woman (Gideon calls her “yalla” later on) to have truly extended screentime in a Morrison novel, and Tar Baby is the only of her oeuvre to feature white main characters.

67: Regarding Valerian and Margaret’s “May and December marriage,” Jadine thinks, “He is waning, shutting up, closing in. She’s blazing with the fire of a soon to be setting sun.” Damn if I don’t want my middle age to blaze with the same fire.

94: “Things went back to their natural state so quickly in that place.” Morrison plays with the notion that black = wild here to explore the fear that Son’s presence will reintroduce Jade to her wildness. This recalls Sula and her funkiness (and Helene Wright’s fear that hanging out with Sula would turn Nel wild), and now I really want to read a paper that puts Tar Baby alongside Sula.

99: Sydney refers to Son as “that nigger.” It’s not the first time Morrison has shown us one black person calling another one “nigger,” and I know she does it to demonstrate intra-racial caste and class systems, but I am always caught a little off-guard by it. And honestly, I am deeply uncomfortable quoting it here. But the alternative, to reduce it to “n-word,” would be a crime against Morrison and her work.

119: The image of Son standing over Jadine’s bed and whispering dreams to her is creepy but also sort of enchanting. And my Cambridge Companion to Toni Morrison tells me it’s an allusion to Paradise Lost. Well played, ToMo. I expect nothing less than subtle references to difficult works of classic literature.

129: Now, in a conversation with Margaret, Jadine calls son a “nigger” but bristles when Margaret says he looked like a “gorilla” when she found him hiding in the closet. This gives me pause, and I think Morrison wants that.

134-137: I simply adore the story of how Son came to the island, and Morrison’s use of repetition to hammer home “He had not followed the women” is beautiful.

155: Gideon (Yardman) and Son discuss Jadine and her status as a “yalla.” Gideon says, “It’s hard for them not to be white people…Yallas don’t come to being black natural-like. They have to choose it and most don’t choose it.” I love that Morrison questions the notion that racial identity is immutable, and I want more of this conversation about what it means to embrace or reject blackness.

185: Jadine and Son return from the picnic during which Jadine gets stuck in the swamp, and Margaret looks at the muck on Jadine’s clothing, noting, “It looks like pitch” (emphasis mine). You know, just in case you weren’t sure that Jade is the tar baby in this scenario.

186: Reference to “Dorcus, the one black girl she ever looked in the fact.” There’s a Dorcas in Jazz. A minor change in spelling, but still. Is Morrison going to connect these characters, or is she just a fan of repeating character names? We’ve seen Suggs in multiple novels already, and Baby Suggs is HUGE in Beloved.

206: Valerian has come off as relatively friendly to the black characters in the book so far, but he fires Gideon and Thérèse for taking apples and responds to Syndney and Ondine’s protests with, “I am being questioned by these people, as if, as if I could be called into question!” White privilege and entitlement rear their ugly heads.

219: Son thinks of his and Jadine’s leave-taking as an “escape from the plantation.” There. It. Is.

222: In New York, Son and Jade would “drink margaritas at Suggs.” See what I mean about repetition of names?

230: Jadine and Son become so close that their “language diminished to code.” Ahhh, ain’t love grand?

236: The revelation that Margaret abused Michael is a big one, and I so appreciate that it’s not one-dimensional and that Margaret is straight-up vilified (right, as if Toni Morrison does anything one-dimensionally). She notes that Margaret was “outraged by that infant needfulness,” and that’s another call back to Sula and the burden of motherhood.

262: I’m just going to say it. I do not get the “coven” of women who appear to Jadine and bare their breasts. Please explain it to me.

265: Thérèse’s last name is Foucault. Don’t tell me that doesn’t mean something.

270: “People don’t mix races; they abandon them or pick them.” I’ve read a lot of studies about how people’s sexual identities evolves and changes over the course of a lifetime, and I would love to read something similar about racial identity. (If you know of a good resource, please leave a link in the comments.)