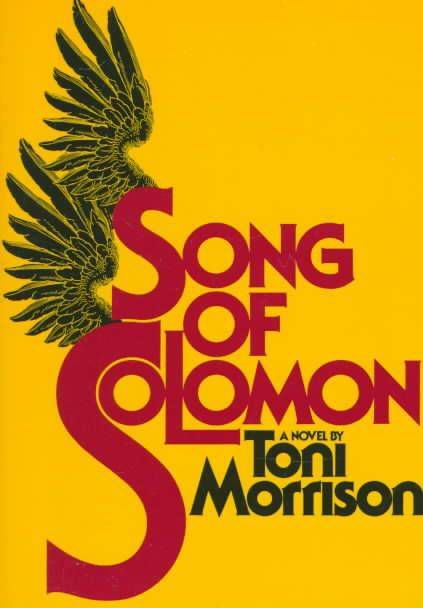 My adventure back through Toni Morrison’s backlist in preparation for our Riot Reading Day on May 8 rolls on. See previous installments here.

I had grand plans to try Jeff’s close-reading technique with this opening, but the foreword contains Morrison’s own close-reading of the first sentence.* And it’s not like I want to compete with that. So on we go!

10: “Solid, rumbling, likely to erupt without prior notice, Macon kept each member of his family awkward with fear. His hatred of his wife glittered and sparked in every word he spoke to her.” Morrison is three for three with male characters who direct their anger at their families and relish their contempt for women. Macon is like Cholly and BoyBoy, who came before him.

11: Ruth uses a large watermark on the table as a touchstone. Did Kathryn Stockett steal this detail, too? Wait, that was an L-shaped scratch. But still.

19: This book is the moment when Morrison goes from kinda sorta weird to full-blown crazy. And I mean that in the best possible way. Crazy looks good on her. The first reference to Pilate stringing the box containing her name through her ear is the first indication that this one is going to be full of awesome WTF.

27: We find out that Pilate’s mother died before Pilate was born and that Pilate doesn’t have a navel. Establishes her as not physically connected to anyone and possibly supernatural. On p. 39, Morrison says she “looked like a tall black tree,” the first of many references to Pilate as a tree. The phrase “ancestor figure” appears in my marginalia from my college reading of this. I think that’s a good way to think about her.

41: “What difference do it make if the thing you scared of is real or not?” LOVE.

45: Guitar is named Guitar (yes, there’s a character named Guitar) “not cause I do play. Because I wanted to.” The idea that people are defined by their desires and/or by what is denied to them is going to prove central.

64: Milkman sees his mother Ruth “as a frail woman content to do tiny things,” while his sister Magdalene called Lena (HOO BOY, I better start looking up the biblical names now) recognizes “how her mother had learned to bring her husband to a point, not of power…but of helplessness.” Important that they have such disparate reactions to witnessing the same events.

69: Macon has taught Milkman all about “the business of life, which was learning to own things.” The question of whether possessions give a man power or drag him down is also primary to this book.

75: Whereas The Bluest Eye and Sula are largely about exploring (lordy, I almost wrote “limning”) womanhood, this novel is about men, about what it means to be a man in the world, particularly a black man in a white man’s world. After Milkman hits his father to protect his mother: “Isn’t that what men did? Protected the frail and confronted the King of the Mountain?”

91: Tied up in this obsession with masculinity is the idea that real men use women for what they want and leave the rest. Milkman’s private thoughts about Hagar after years of sexual entanglement:

“She was the third beer. Not the first one, which the throat receives with almost tearful gratitude; nor the second, that confirms and extends the pleasure of the first. But the third, the one you drink because it’s there, because it can’t hurt, and because what difference does it make?”

Morrison nails this. It’s an incredible description, and I can’t decide if I want to celebrate it, or if I’m just really sad that this phenomenon exists to be described at all.

104: “Serious is just another word for miserable.” ‘Nuff said

107: “He wondered what they would do if they didn’t have black and white problems to talk about. Who would they be if they couldn’t describe the insults, violence, and oppression that their lives (and the television news) were made of? … They excused themselves for everything.”

Is this explanation? Indictment? It’s about more than the fact of their identities being formed by and in opposition to oppression. I want to know more.

114: Guitar says, “Goddam, Milk. I do believe my whole life’s geography.” Hello, geography-as-destiny and the “I’ll fly away” yearning.

155: Guitar’s explaining the Seven Days to Milkman is one of the great OMG of Morrison’s oeuvre. I continue to wonder about the significance of Guitar having Sundays.

179: On the long list of Toni Morrison quotes that get pulled out of context and self help-ified, this is tops: “Wanna fly, you got to give up the shit that weighs you down.” Note to self: future post on the self help-ification of Toni Morrison. I feel like this use of her work trivializes its power.

194: We learn that Corinthians (again with the biblical names) “hated [Henry Porter] a lot for the shame she felt.” It’s interesting, after so many male characters who hate the women in their lives, to see a female character’s contempt for her partner. Morrison just put the thing down, flipped it, and reversed it. Yeah. I went there.

204: I read the scene in which Guitar and Milkman are stopped by the police for no reason–a clear example of racial profiling–on the same morning I consume dozens of articles about Trayvon Martin. A 35-year-old scene that could have been written last week, it’s so relevant. So prophetic, and so sad.

240-249: Milkman’s encounter with Circe in the falling-down house feels like a fever dream or something out of Garcia Marquez. It’s just so odd. But “so odd” is also code for “so Morrison” at this stage in the game.

250: I’m now convinced that pretty much everyone plagiarizes from Toni Morrison. Just tell me Marcy Playground didn’t write their one big hit based on “…he smelled money, although it was not a smell at all. It was like candy and sex and soft twinkling lights.”

266-270: Back onto the masculinity theme with the men in Shalimar jumping Milkman in the store after they feel he calls their manhood into question. Then they take him hunting. For coon. Oh, Toni! “Oh, man! We gonna get some coon tonight!” has multiple meanings. You know it does. Is this a little heavy-handed? I think maybe.

283: I made it nearly 300 pages into this book–a book that spends a not insignificant amount of time on the meaning of flight–without thinking about how it’s important that Pilate sounds like “pilot.” Oof.

330: Morrison does a roll call of sorts, listing “names that bear witness” to history. It’s sobering in effect and also entertaining in that dark, “look at how many crazy names she can come up with” way. Also, I still haven’t figured out why Empire State is called Empire State. Did I miss a teeny reference?

Post-read gut check: SO MANY FEELINGS. It was nice to read a relatively linear narrative after the bounce-around-in-time-ness of the first two, and really interesting to move into a book focused on male characters and the male experience. I really adore this book. But I finished it and realized that I’m only one-third of the way through this re-read. And now I’m starting to think this project is a little crazy. But it’ll be good, right?