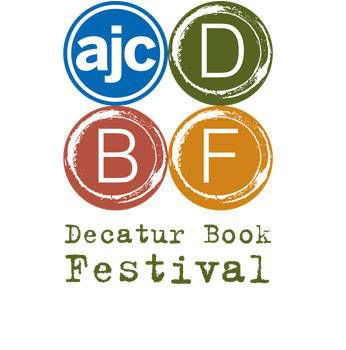 What do you do if given only a few hours to explore a book festival? 600 authors, blocks of booths, panels, and addresses dispersed around town. For a bibliophile, this is kid-in-a-candy store territory. You can easily exhaust the weekend trading between stops.

I had a mere morning.

Still, the ever-expanding Decatur Book Festival may be the ideal event for a concentrated dose of bookishness. That it’s an indie gathering helps. Here’s a place to celebrate the most esoteric of publications—the books the Big Five were reticent to touch, perhaps, but which teem with envelope-pushing concepts, or specialized interests, or daring narratives. This is less the Times bestseller list splayed out street-fair style than it is a glorious array of titles you may not know yet, but that, once they work their way into your hands, are clear kismet.

I got a little lost in the pre-planning. Decatur’s list of participants gets increasingly impressive as the festival ages: from Congressman John Lewis not long ago, to a schedule which, this weekend, included Pat Conroy, Meg Cabot, and Christopher Moore, with Erica Jong and Roxane Gay taking the premiere speaking spot.

That marquee alone sang to me: feminist. Southern. Irreverent.

These are broad strokes, though, for a festival replete with niches. Break down the author appearances by track–political, religious, scientific, romance–and you discover talks on subjects meant for you.

I, who studied feminist theology in school, and who wrestles, sometimes obsessively, with questions around the room made for (or denied to) women in religion, found my ideal Saturday morning in a talk by three essayists who contributed to a new collection, Faithfully Feminist.

I found, before I even set foot on festival grounds, my perfect book.

Book people must rise late. I hadn’t noticed this in previous years–maybe because I’ve always come to the festival late myself, after lingering breakfasts with friends or nice, lazy mornings. I just presumed that the crowds we arrived to preceded us by a generous stretch.

Not so generous. When I arrived at nine this year, most vendors were still setting up. I found the booth that topped my shopping list–And Thou Shalt Read, full of crates brought down from a bookstore in Roswell that specializes in Judaica. Titles jumped out at me, but the street’s booksellers weren’t ready yet, so I strolled through some booths that were.

The University presses were prepared. Emory had its titles almost entirely laid out, and the University of Georgia Press, not far from it, already had a writer waiting for readers to arrive. The emerging author tent was on point, too–and a nice embodiment of the festival itself.

For readers who gravitate toward used books, there are plenty to be found, either from specialty vendors, or at the library sale off of the square; for those looking for 3-for-$5 bookstore deals, there are tents for that, too.

But the emerging author tent is where you’ll find the books that surprise you. These are the waxy-covered, intriguingly titled, probably unfamiliar self-published books that offer distinctive and intriguing perspectives. They’re so Decatur.

For me, though, this year’s festival visit was about control, specialization, staying on track. I didn’t take my wallet out until I got to the talk; Faithfully Feminist itself became my first purchase, and its pages the provocative reading that held me over until the talk began.

I don’t know how Decatur does it. In that conference room, in that book talk, I felt spoken to. Aisha Saeed, who was also promoting her YA novel, Written In the Stars, read from an essay about navigating work, motherhood, and religion. Rachel Lieberman, a dynamic young activist who serves as program director for the Jewish Orthodox Feminist Alliance, offered a bit from her piece on growing into a tradition that’s sometimes slow to grow equally toward you. The room was full, and its listeners were involved, familiar with the topic, and responsive.

Maybe an indie book festival is an ideal place to encounter readers who, in their particularity, are also so like you.

Post-talk, I met with Rachel to talk books, life, and religion in greater detail. From her, I learned more about Faithfully Feminist, including about how the project came together.  The conversation was a neatly ideal way to spend a Shabbat morning–not Torah study exactly, but engaged book-ish talk. We covered an array of topics: practice, study, religious life in its ebbs and flows. We traded book recommendations. Waldo–who’s always at the Decatur Book Festival, if you’re still looking–strolled by.

Three hours at a book festival looks to be, at the outset, too little, but by the time I realized I had to abandon my conversation with Rachel, I’d had a serving of it that sated me perfectly. Though I missed the clash between Jong and Gay, and had to forgo the talks other friends came in specifically for; though there was no Pat Conroy signing for me, and though I didn’t get to visit nearly every booth; I got a version of the festival that seemed almost tailored to me.

I passed And Thou Shalt Read on my way back out–enough moments left to grab a title or three–and left to boast to the party that I was meeting about my perfect, bookcentric, uncommon-kind-of-spiritual Saturday morning.