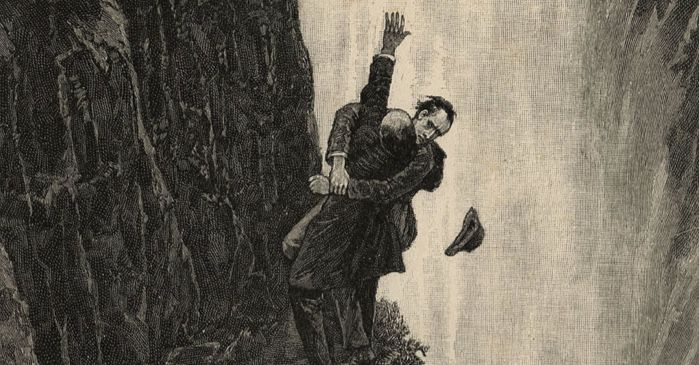 The Final Problem might be the most infamous and influential Sherlock Holmes story that Sir Arthur Conan Doyle ever wrote. That’s surprising in some ways. It’s not very good as a mystery story. Holmes really just takes his friend Watson on a road trip before his own epic, off-screen final battle against a supervillain we’ve never heard of. But The Final Problem‘s true purpose transcends its shortcomings, for this is the story in which Holmes “dies.”

Yeah, I don’t think those quotations marks are spoiling it for anyone. Doyle, under tremendous public pressure (and after being offered wads of cash by his publisher), resurrected Holmes eventually. But at the time, Victorian readers were shocked by the image of their favorite coke-injecting detecting machine going over a cliff, even for a cause as just as ridding the world of Professor Moriarty. Not only was the death itself a bombshell, but the manner of death was quite dramatic. The fatal fight took place on May 4, 1891, at Reichenbach Falls, a real waterfall located near Meiringen, Switzerland. (There is now a commemorative plaque on the spot where it happened.) Dr. Watson describes the falls thusly:

“It is, indeed, a fearful place. The torrent, swollen by the melting snow, plunges into a tremendous abyss, from which the spray rolls up like the smoke from a burning house. The shaft into which the river hurls itself is an immense chasm, lined by glistening coal-black rock, and narrowing into a creaming, boiling pit of incalculable depth, which brims over and shoots the stream onward over its jagged lip. The long sweep of green water roaring forever down, and the thick flickering curtain of spray hissing forever upward, turn a man giddy with their constant whirl and clamour.”

Quite the drama queen, our Watson. Doyle couldn’t have known at the time, but he was giving future adaptations of this story a lot to live up to. Not even the real falls could match this description! How could the various screen adaptations bring such a terrible place to life? That is what I intend to explore today.

To clarify, this article is about ranking the actual falls themselves. I don’t care about the rest of the story or how faithful the adaptation is or anything like that. I just want to look at some pretty waterfalls and rank them based on how they compare to the setting Watson describes. We’ll go from worst to best, but first, an honorable mention…

I’m not counting this one in the actual rankings because, unlike other adaptations, this one was filmed at the real Reichenbach Falls. Needless to say, that gives it an unfair advantage over the others.

Anyway, I love the touches of green. It makes the waterfall, the rock wall, and Moriarty skulking in the background even more forbidding. And yet, I’m torn: it lacks a certain menacing quality present in other versions. But doesn’t that make it more menacing by showing that even beauty can be dangerous?

Also no waterfall, but at least there is water under the bridge where Holmes confronts Odin Reichenbach. Also, this doesn’t affect the score, but the bad guy’s name reminds me of Orville Redenbacher, which is not scary at all. 0.5/10

Not technically an adaptation, and Moriarty is nowhere to be found. It does involve Holmes faking his death by water, though, so we’ll go with it. These are some very nice, quaint, green-screened rapids. I would totally visit. Maybe bring a picnic. Not exactly menacing, but without Moriarty, the tone of the whole scene changes, so it doesn’t have to be. 4/10

Sherlock Holmes: A Game of Shadows

First we have no waterfall, and now we have WAY TOO MUCH waterfall. This is downright cartoonish, but I’ll give it points for making me laugh. Look at this nonsense. This isn’t Reichenbach; it’s Doctor Doom’s vacation home. 6/10

Still a bit on the overcompensation side of the scale, but there is a clear effort to recreate the original illustration (check out that ledge design). Unlike this show’s previous attempt at a Reichenbach fall, they did actually try this time, and I respect that. 6.5/10

Like A Game of Shadows, this adaptation eschewed the normal May/springtime setting and set the story in the dead of winter instead, which gives it a uniquely menacing look. These falls may be frozen, but they still look like they’re “roaring forever downward”…especially when Moriarty starts an avalanche. 8/10

The Adventures of Sherlock Holmes and Doctor Watson

This one is a lot harsher than some depictions of the falls, which works in its favor. No lush grass or lovely vistas here: just hard, menacing rock and stark visuals. It may not be a “creaming, boiling pit” exactly, but it’s the closest I’ve seen to the illustration (barring Sherlock, which clearly used CGI). Never thought I’d say this unironically, but good show, Soviet Russia! 9.5/10