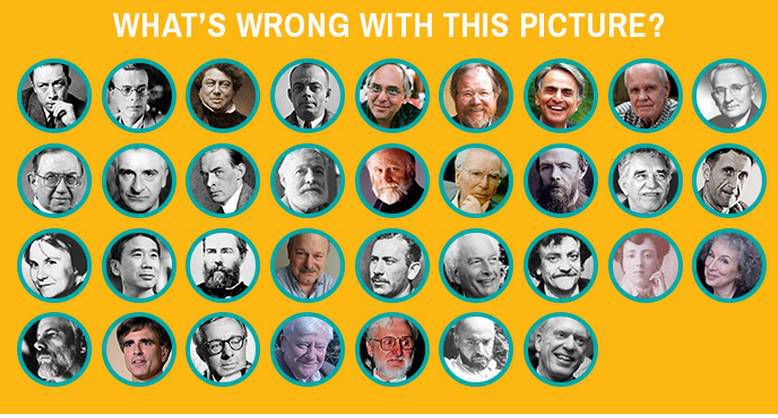 Scanning through my Twitter feed recently, I came across a Time.com message touting
35 Books Everyone Should Read in Their Lifetime. List lover that I am, I dove in, eager to refresh my to-be-read pile.

Irritated, I replied: “I hope this is a first draft and you plan to do some soul searching about the bias you just put on blast.” I wrongly assumed that the whitewashed list, like so many others every year, was a sole author’s creation. Turns out, the real origin was more interesting. Time reprinted a Business Insider article summarizing a Reddit thread that asked, “What is a book that everyone needs to read at least once in their life?”

It’s bad enough that mainstream media reporters consistently develop and deliver whitewashed must-read lists on their own. (Witness this New York Times summer reading list.) But promoting third-party roundups of content produced on the same site as CoonTown feels like a new low. (Reddit only recently shut down some of its racist communities earlier this month.)

This case highlights the intractability of bringing diverse authors to prominence. It’s not enough to persuade influential book reviewers to integrate their lists, hoping the spirit of inclusion trickles down to everyday readers — not when major publications promote user-generated lists that are just as pale. Promoting diverse authors is a top-down, bottom-up, round-and-round battle fought in short-range, hand-to-hand.

Forgive the war analogies, but the erasure of legions of authors feels like a kind of violence. Just today I received an all-white summer reading list from the graduate school I attended. Surely, the monochromatic roundup contradicts the university’s self-proclaimed efforts “to build a truly diverse, inclusive, and welcoming community for all.”

To be clear, my issue is not with the wonderful authors who do appear on recommendation lists with regularity. Rather, I reject the customs and unconsciousness that callously promote those authors while systematically excluding worthy voices of a different hue.

In the face of such persistent slights, a certain aggressiveness is required to give diverse literary voices a fighting chance. Only when enlightened readers produce a critical mass of tweets, essays and general outcry will reading lists more fully reflect our incredibly varied and colorful world. That’s why I love Book Riot posts like this, this and this.

Vigilant community oversight and publicly calling offenders to account are promising tactics. I’ve seen an uptick in the number of widely read articles calling attention to the perils of whites-only book lists. When well-respected publications send their blanched lists of reading recommendations out into the world, enlightened readers are quick to call them out and offer more diverse reading options. Take Roxane Gay’s classic response, The Worst Kind of Groundhog Day: Let’s Talk (Again) About Diversity in Publishing. (I would expect the New York Times writer recognized for reaching “peak caucasity” to hesitate before delivering another ivory roundup.)

But it’s not enough to nag publishing industry players into adding some token color to the palette. I would also like to see some guilt, reconciliation, and penance on their part. Recompense would look like joining us here in the real world and recognizing our humanity as readers, authors, characters. It would look like permanently relieving mindful readers of the duty of pointing out over and over again that people of a variety of ethnicities and experiences exist and matter. As Natalya Sylvester put it in a piece about tired summer reading lists: “Until we don’t have to point out diversity, until the word itself becomes more accurately replaced with ‘reality,’ it’ll be déjà vu over and over again.”

It will take some time for diverse authors to bubble up in online popularity contests like the Reddit thread, but personally curated lists by pros and novices alike can transform in no time if pressure is applied. Are you in?

My Pick for A Book Everyone Should Read? 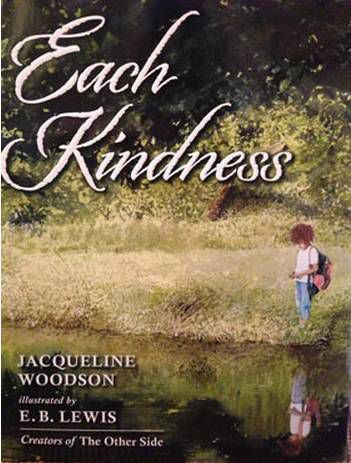 I love this elegant story of kindness and cruelty. In just 32 pages, it distills the essence of human conflict–a persistent refusal to see the humanity in others and extend simple warmth and care.

Set among school children, Each Kindness is told from the perspective of Chloe, a young girl who refuses to accept small gestures of friendship from Maya, the new girl. Maya wears spring shoes in the snow and plays alone, snubbed by classmates who laugh and name her Never New for her hand-me-down wardrobe. Despite her absolute rejection in the schoolyard, Maya continually reaches out, extending a glance, a smile, some jacks, a ball–ever optimistic that one day her affection will be returned. Alas, it is not, and we last see her jumping rope around the whole school yard alone, never stopping, never looking up. Heartbreaking.

On the next page, Maya is absent from school and the girls’ teacher Ms. Albert gives a lesson in kindness. Chloe is moved when the teacher drops a small stone into a bowl of water, observes the ripples and says: “This is what kindness does. Each little thing we do goes out, like a ripple, into the world.” But Chloe can’t think of a single kindness to share when it is her turn to drop a pebble into the bowl.

Later, she resolves to be kind and make the world better by simply returning Maya’s smile. But her realization comes too late. Maya’s absences from school pile up and Ms. Albert announces that her family had to move away. Chloe sits by a pond and considers each kindness she had never shown.

I threw small stones into it, over and over.
Watching the way the water rippled out and away.
Out and away.

Like each kindness — done and not done.
Like every girl somewhere —
holding a small gift out to someone
and that someone turning away from it.

The economy of Woodson’s prose and the solemnity of E.B. Lewis’s illustration combine to powerful effect. Together, they remind us that sometimes we learn valuable lessons too late, with real consequences for the people we spurn.

It is a small kindness for readers to embrace the work of authors who reflect the abundant and varied world we live in, a kindness that ripples out and away, enriching us all. Don’t turn away.