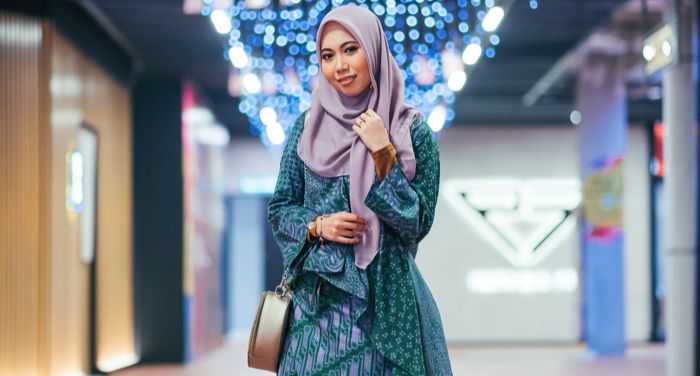 I’m pretty much the last person anyone would ask about fashion, modest or otherwise. That’s not a dig on my clothing choices, although they are usually unimpressive. Rather it is just a fact that I have never been very interested in fashion. 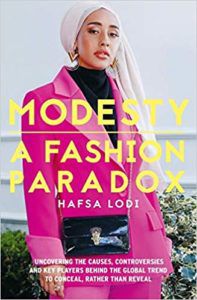 Which is why it’s funny that I am so excited to read Hafsa Lodi’s book Modesty: A Fashion Paradox. Although the photographs in it are striking, it’s not the styling or clothing I’m interested in. Instead it is the way fashion intersects with definitions of “modesty” (whatever that means) and “modest fashion.”

Lodi studied journalism and has written about fashion (among other topics) for numerous publications including The National and Vogue India. She is thoughtful and reflective in her writing, something a topic like this strongly requires. It would be easy to fall into simple dichotomies of covering one’s body is good or bad. However, Lodi avoids this in her shorter pieces. I expect nothing less of her in her book.

Her profile of influencer Leah Vernon and her memoir Unashamed: Musings of a Fat, Black Muslim is a good example. Vernon had to face a number of obstacles, particularly related to her size, when searching for self-acceptance. Lodi handles Vernon’s body image issues and her other concerns with sensitivity. Reading her profile made me more interested in Vernon’s book and this is of course the desired outcome. However, in the hands of a less thoughtful writer, it may not always be the result. 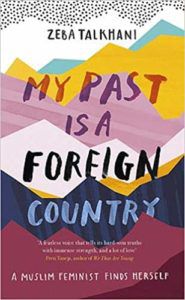 Lodi’s profile of Zeba Talkhani and her memoir My Past is a Foreign Country is another good example. Talkhani is South Asian and Muslim, and grew up in Saudi Arabia in a conservative family. As she grew more conscious of her family’s narrow expectations, she found she was often at odds with her conservative family’s plans for her. Talkhani describes herself as an intersectional feminist, and Lodi is careful to present Talkhani’s memoir in a nuanced way, rather than just as another woman freeing herself from the oppression of her religion and family.

Lodi also has a master’s degree in Islamic law from the School of Oriental and African Studies in London. Obviously, her interest in Islam is also one that is long-standing. In her writing, Lodi brings together religious interpretation and clothing design to analyze this apparent trend of modest fashion. And this is important to me because I have never gravitated toward style considerations, but I am interested in how individuals can affect fashion to fit their own needs. 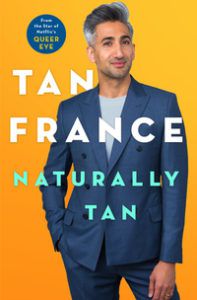 Fashion Probably Isn’t for Me

While listening to Tan France’s memoir Naturally Tan recently, I skipped all the fashion tips and just listened to his story about growing up gay, Muslim, and brown in England. I love Netflix’s Queer Eye reboot, but mostly for the kind and thoughtful way the hosts help the nominees. There’s a lot of radical self-love on there—just like in Jonathan Van Ness’s memoir Over the Top, which I also enjoyed (although some parts were very tough to listen to so do heed his warning at the beginning). Queer Eye shows there’s hope for everyone to change in a way that is personally meaningful for them. Some of that involves concentrating on the nominees’ clothing naturally, but I usually don’t focus much on the fashion angle.

Apparently, France designed a women’s swimwear line because he saw an opportunity in creating flattering designs that were not very revealing, particularly for Mormon women. I found this fascinating. It made me literally sit up and pay more attention to this part of his memoir.

When I was growing up, the prevailing beauty standard demanded choosing more revealing clothing, rather than less. If there was an emphasis on selecting pieces that flatter the individual, I don’t remember it as much. In my case, I did not have a religious injunction to follow. However, I’ve always preferred covering more because it feels more comfortable to me. Now I am at an age (and living in a part of the world) where it is easy to find a variety of less revealing choices. But this was not the case when I was younger. Thankfully, a lot of the accepted beauty standards seem to have changed (some for the better) since I was a teenager.

However, a woman’s sartorial choices still seem to be an issue up for public debate. Mostly I have chalked that up to good old sexism (or perhaps xenophobia in some cases). A lot of it is directed at Muslim women. Of course, many Muslims will point out that modesty is a requirement of both men and women in Islam. Unfortunately though, most of the judgments—at least in the public sphere—fall largely on women and girls. Also the kinds of criticism often aimed at women about their clothing choices are sadly predictable.

Whether it is a result of this or merely a coincidence, Muslim women seem to be leading this trend at the moment. However, Lodi points out that the Muslim influencers and models she interviews are not alone in their interest. Other women who will choose less revealing styles include Orthodox Jewish women, some Christian women, and those who just feel more comfortable in these kinds of clothing.

Not having grown up around a lot of Muslim women, I was not sure what to expect when I first traveled to the Middle East. I vaguely understood that women covered in public more than in the U.S. Some women wore headscarves and some did not. That was about the extent of my knowledge and I thought this meant looking more plain or muted. After my first trip, it was clear that being covered was not equal to looking dowdy or trying to completely conceal a feminine shape.

Many women I saw had definitely spent time coordinating their outfits. None had just left the house in whatever was long enough to reach their ankles. At the time, I saw lots of pastel overcoats (with a vaguely ’90s vibe) and solid hijabs in a complementary color. Of course, the specifics of the trends have long since changed. However, seeing that women could be fashionable without revealing a lot of their bodies or uncovering much skin was revelatory. To be frank, I never questioned why this surprised me until I came across this modest fashion concept.

Now, after reading this excerpt from Lodi’s book, I realize that there is so much more to think about. Other than vaguely noticing Nike’s campaign with Ibtihaj Muhammad, I had not really considered most of the things Lodi writes about. For example, I did not know there were hijabi (or veiled) influencers, stylists, and models until recently. Having now lived in a few countries where there is clear demand for this, the interest in modest fashion makes sense.

And now thanks to Lodi’s book, I have something interesting to read on the subject. It is fascinating to consider how fashion intersects with definitions of modesty and religious interpretation, especially in Muslim communities around the world. And I will be curious to see if this trend has staying power and if future fashions will include a more diverse group of women and men as a result.