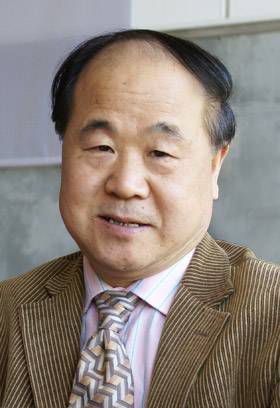 If you had Chinese write Mo Yan in your Nobel Prize in Lit pool, you’re a winner, winner, chicken dinner! The writer, whose actual name is Guan Moye (Mo Yan means “don’t speak” in Chinese), had been one of the favorites — an 8/1 shot according to Ladbrokes’ odds, as of yesterday. Hey, we told you it was solid bet!

The 57-year-old Mo Yan, who takes home 8 million kronor, or about $1.2 million, is the first Chinese national to win the prize, though in 2000 Gao Xingjian, a Chinese-born-but-French-citizen won the Prize. The Nobel committee chose Mo Yan because he is a writer “who with halluncinatory realism merges folk tales, history and contemporary.” Furthermore, “through a mixture of fantasy and reality, historical and social perspectives, Mo Yan has created a world reminiscent in its complexity of those in the writings of William Faulkner and Gabriel García Márquez, at the same time finding a departure point in old Chinese literature and in oral tradition.”

According to a profile of Mo Yan in Time in 2010, Mo Yan sets much of his fiction — including what he refers to as his magnum opus, a tome titled Big Breasts and Wide Hips— in the past to avoid “stirring up the animosity of the country’s ever vigilant censors.” His 1987 novel Red Sorghum was a breakthrough. The story, which is set in the 1930s and chronicles a woman sent to marry the owner of a winery, was adapted to film, and won first prize at the Berlin International Film Festival in 1998. Another of Mo Yan’s novels, Frog, examines the effects of China’s controversial one-child policy. Many of Mo Yan’s novels and volumes of short stories are available in English.

If you’ve read Mo Yan’s work, we’d love to know what you think. Where should readers start were they to dive into this newly “crowned” Nobel Laureate’s work?