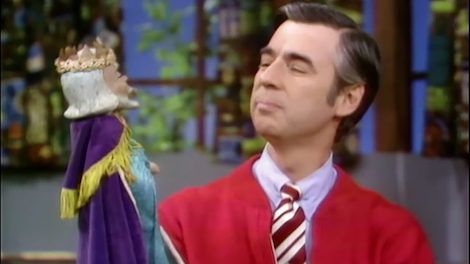 There is one word I would use to sum up Fred Rogers, aka Mister Rogers, and that word is Legendary! Mister Rogers was as chill as a cucumber and he understood the importance of early childhood literacy. He was an advocate for government funding for children’s television (PBS) and was just an all-around bad ass. In 1969, he spoke in front of the United States Senate Subcommittee on Communications and just about single-handedly secured twenty million dollars of funding for PBS and the Corporation for Public Broadcasting. Check out how smooth and cool he was here:

It was also announced earlier this year that Tom Hanks would play Mister Rogers in a biopic titled You Are My Friend. But what separated Fred Rogers from other early childhood literacy advocates, in my opinion, is his understanding of how vital it was for children to build a phonetic foundation early on. Of course, this meant that the role of the parents was crucial in establishing this foundation. From The Fred Rogers Center: “Fred Rogers understood that early language development is important for a child’s ability to relate to the world and the people in it. Fred believed words help children better understand and manage their inner drama. Fred also understood that conversation between child and adult is critical for children’s intellectual and emotional growth.” Rogers’s body of work was so influential and instrumental that it was clear to anybody who genuinely paid attention that he was way ahead of his time.

While it may have taken time for others to fully appreciate just how important early childhood literacy is, the American Academy of Pediatrics, in June of this year, took the crucial step of announcing “new guidelines that encourage doctors to speak with parents about the importance of reading aloud, as well as talking and singing to infants from their first days of life. Reach Out and Read, a national nonprofit that enlists pediatricians to give out books to low-income families, published a summer reading list for children from birth through age 12.” This victory is due in no small part to the dedication of Fred Rogers and other early childhood literacy advocates.

This is truly amazing. I cannot tell you how enamored I am by Mister Rogers’s body of work. He was an inspiration to my sisters and me when we were kids and watching Mister Rogers’ Neighborhood was a time of complete solace, considering my humble upbringing. If you have kids, take the time to read with them and have meaningful conversations with them. Early literacy development is vital to later academic success. And if you get a chance, go and watch Won’t You Be My Neighbor in theaters. It is an exploration of the life, lessons, and legacy of the iconic Fred Rogers. You will not be disappointed.