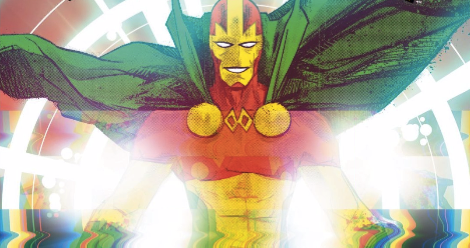 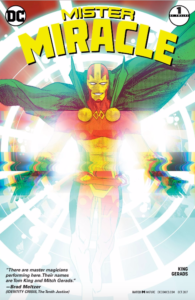 Last week’s Mister Miracle #1 by Tom King, Mitch Gerads, and Clayton Cowles was probably the most hotly anticipated comic of the summer. I, personally, couldn’t wait to see the return of a character who’s been missing in action for far too long. Not just because I’m a Mister Miracle fan in general – although I am – but because Mister Miracle is, at heart, a story about standing defiant in the face of rising fascism. In fact, the whole Fourth World narrative is built around that very thing, a fact too easy to forget the more DC uses Darkseid as a generic tank.

So what is the Fourth World? Well, back in the early 70s, Jack Kirby, fresh off countless triumphs at Marvel, was given free rein at DC to create new characters and settings. He responded by writing and drawing a tetralogy of books: the preexisting-but-floundering Superman’s Pal, Jimmy Olsen and the new Mister Miracle, The New Gods, and The Forever People. In these books, he introduced Apokolips and New Genesis, two distant planets locked in eternal war. In an attempt at peace, the rulers of the two planets, Darkseid and Highfather, agreed to trade their infant sons, the idea being that neither planet would attack while their young prince was held hostage.

And so Orion, the son of the evil Darkseid, was raised on utopian New Genesis, never quite understanding why his twisted face and boundless rage didn’t fit in with the beautiful and content New Genesisians. And Scott Free, the son of Highfather, was raised on the hellish Apokolips, in the orphanage of the sadistic Granny Goodness. Eventually he escaped to Earth – joined later by Big Barda, the warrior goddess leader of Granny’s Female Furies – and became the superhero/escape artist Mister Miracle.

The symbolism of the Fourth World, especially Darkseid and Apokolips, has never been subtle. Apokolips itself – as created by World War II veteran Kirby – is a barren wasteland dotted by explosive firepits, patrolled by the inhuman, interchangeable Parademons, where wretched Lowlies live in the city of Armagetto. Darkseid, Apokolips’ brutal ruler, is forever searching for the Anti-Life Equation, which will give him complete control over all living things and eliminate free will. And just in case you didn’t get the Hitler references, he surrounds himself with minions with German names like Steppenwolf and Virman Vundabar.

Darkseid is a physically imposing character, but I find him most chilling not when he’s slugging Superman across Metropolis, but when he’s behaving in more insidious ways. His scariest and most effective minions aren’t bruisers like Steppenwolf or Kalibak, but Granny Goodness, who twists children to sadism and violence from birth, and Glorious Godfrey, who uses the media to persuade humans to hate and fear anyone different. And Darkseid’s signature move isn’t a knockout punch, but showing up in your living room when you least expect it. (There’s even a Justice League International gag where he’s kicking back and reading Mein Kampf.) Again, the ideas aren’t subtle:

1. The opposite of life isn’t death, but loss of free will, i.e. fascism.

2. The evil behind fascism lurks everywhere, even in your own home.

There’s a reason the repeated refrain of the slaves of Apokolips is “Darkseid is.” What he does is less important than the fact that he exists. His evil is omnipresent. 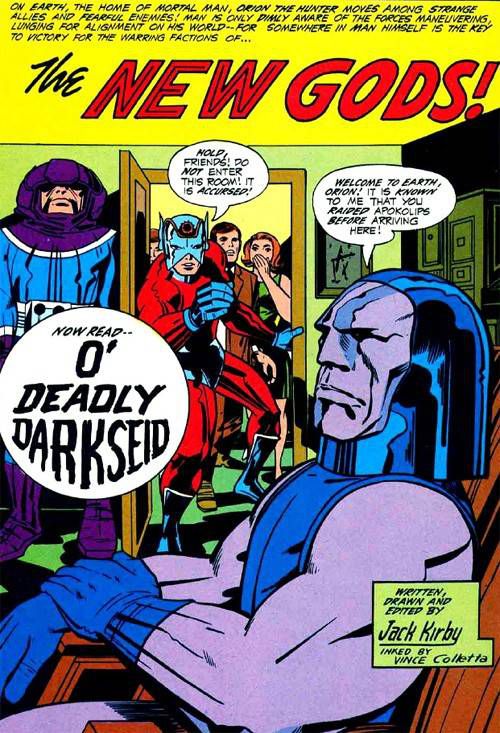 And yet to me the Fourth World is a story of hope because of one key detail: Scott Free and Orion are both heroes. One is born to good but raised by evil; one is born to evil but raised by good. Still, given the choice, both ally themselves with Highfather and fight against Darkseid. It’s not a story about nature or nurture winning out, but about how planting the idea of goodness is all it takes. Even Barda, who was both born and raised on Apokolips, chooses to become a hero. Darkseid is, but the love she shares with Scott is stronger. Darkseid is, but good is stronger.

It was through that lens that I read King and Gerad’s Mister Miracle #1. It begins with an arresting image – Scott bleeding out on the bathroom floor after having slit his wrists – and never steps back from that unsettling precipice. The book is full of sickly blues and greens, disorienting sketchy outlines, and blurry, staticky effects that put the reader into the unsteady headspace of the seriously unwell title character. Page after page marches by in that most measured and traditional of layouts, the nine-panel grid, and peppered throughout the disconnected, non-linear story is one repeated panel in particular: all black, with white text that reads “Darkseid is.” It’s on every page except the splashes, and a single nine-panel page where Highfather’s presence keeps it at bay, the only page with soft, healthy colors. After that page it comes faster and faster, two to a page and then four, until we get a full page near the end that says nothing but. 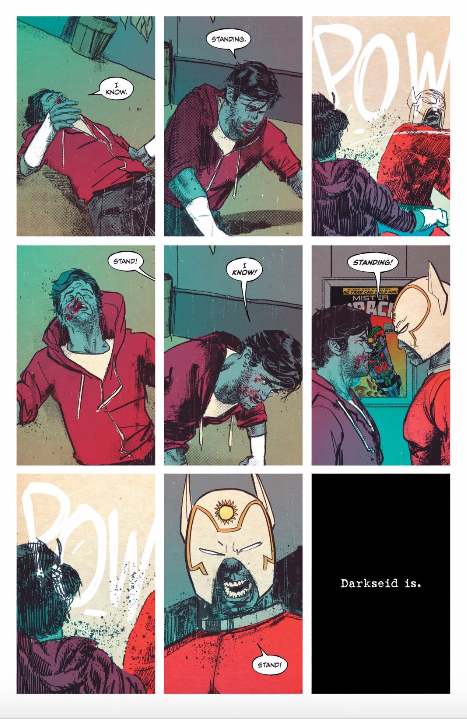 Mister Miracle is an escape artist, but Darkseid’s presence is the steady drumbeat he can’t escape – not even with his own death. And yet, as both his beloved Barda and his sort-of brother Orion remind him, his duty where Darkseid is concerned is not to escape, but to stand.

Darkseid, and the simultaneous peril and temptation he represents – the loss of free will – is omnipresent. He’s on every nine-panel grid. He’s in your living room. He is.

But the story of the Fourth World has always been about choosing to stand against him regardless. No matter how you were born or how you were raised, you can choose to be a hero. You can defy the undefiable.

What makes King and Gerads’ take on Mister Miracle so fitting for 2017 is that they’ve shown Scott’s exhaustion, and his despair. He’s tired. He’s tried to escape. He doesn’t want to fight this fight anymore.

But he stands up, because he has to.

“And so the act goes on,” declares the narration box on the last page, getting in the last word after the final “Darkseid is.” “Follow Mister Miracle! Enter the next trap.”