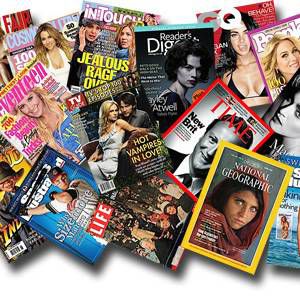 This is a guest post by Syreeta Barlow. Syreeta is a word lover from Atlanta who hordes magazines, edits her text messages, and wants to be a librarian when she grows up. Or more influential on national literacy than Oprah. Either one. Follow her on Twitter@syreetasmiles.

I’ve loved magazines ever since I squirreled away a random Highlights left behind at my pediatrician’s office.  Filled with images of others kids, games, and little stories that didn’t take long to digest, it was like reading an episode of Sesame Street. In a word: awesome!

Back in the 90s, it only took two dollars to bring me complete joy. Long before Macklemore sang its praises, thrift store shopping gave me amazing finds (like sequential copies of The Babysitter’s Club for about fifty cents apiece). But squashed together in between narrow slats, begging me to flip through each and every one of their slick covers, lived my favorite escape. I found oldies from the 1970s like Dynamite, the anti-Seventeen in Sassy (which was itself a precursor to the now defunct Jane), I learned how to stretch my allowance with Penny Power (which became Zillions), and I submitted poems and artwork to Cricket.

Magazines were special. They were never on a required reading list. They had colorful pages, tons of pictures, and even their words looked like art. Though I’m a bibliophile, there will always be a special place in my heart for magazines.

In high school, I decided that my dream job was to become a magazine editor. I went off to college to major in journalism, and I interned and eventually worked for a national magazine. But the writing was no longer in between the pages. As soon as I had announced my intentions of crafting my own interactive magazine – complete with a CD-Rom that let you read the issue on your computer and watch interview footage, everyone delivered the same doomsday prophecy: print journalism is dead. Even my professors realistically lamented the bygone heyday of the newspaper. Mind you, this occurred at the beginning of the millennium, before smartphones were ubiquitous and the dot-com bubble was still floating high.

I ignored their advice, because I planned to create the magazine for my generation. It would have the quality photojournalism of Life, the wittiness of Mental Floss, and the life-changing messages of O. But my generation has replaced this dream with blogs, podcasts, and apps. Content laden magazines like the Georgia-born music rag Paste has been relegated to a website-only format. In fact, most new magazine publishers skip the paper altogether, just to stay alive. While these formats do reach their intended audience, print magazines that haven’t gained an electronic following have gone completely dodo on us. And I miss them.

Two of the most popular print magazines today are from the AARP and the NRA, which means that unless you’re packing heat, or packing Ben-gay, you’ve probably given up on the idea of packing a magazine in your travel bag. Call me Dr. Frankenstein, because I see the good in resurrecting this dying format. Trust me, I get it. I roll my eyes whenever people, these so-called traditionalists, vilify Amazon or iTunes because they “love the smell and feel of a book” in their hands and scoff at anyone who downloads reading material. My optimism refuses to allow me to think of a world without printed books.  Reading online, while convenient, takes a toll on the eyes, and doesn’t quite compare to holding the book in your hands and smelling the pages and…. oh darn, I guess I’m a traditionalist in some way too.

But unlike books, magazines can be dissected until nothing of their original form remains.  You could read an issue of Wired. Or you could listen to a Freakonomics podcast, download the CNET app, and follow your favorite techie on Twitter, for your convenience of course.  But couldn’t these things also complement your magazine reading?

Let’s take those disjointed pieces, those blogs, apps, and other media, and utilize them for the betterment of our magazines.  Let’s recycle our pages, and challenge graphic artists to keep the content exciting and fresh.  Let’s clip out the words that speak to us, and dog-ear the recipe pages to share with our best-friend later.  Let’s slip those magazines back into our messenger bags, or in that little basket in the bathroom, for a quick read when we have some extra time to spend.  Let’s bring print journalism back from the dead and show those gun-toting grannies that our generation has a voice with wide circulation too.

In the future, can you show your children or grandchildren the words that made a difference when you were a teenager? Browsers change, cookies get deleted, apps get erased, and all of the media content you devour is as permanent as your data plan will allow.  But one day,  while you’re perusing eBay, you might just see the old magazine that got you through a weird period during sophomore year. And, like me, you’re gonna be the highest bidder, just to get a piece of that history in your hands. To hold. To smell.  To read.  Magazines document our lives, and what’s important to us, like ever-evolving time capsules.  My wish is that we revive them and make them relevant in our reading lives again.

Besides, when the Zombie Apocalypse comes and all of our technology is destroyed, what else are you going to do?

What magazines do you currently read? Which were you sad to see go?