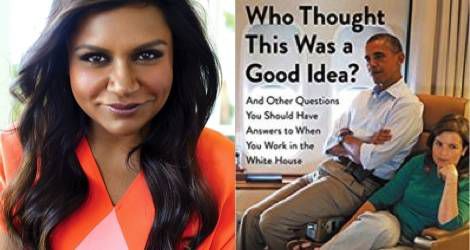 Get your arm flailing ready, Mindy Kaling fans–I’ve got some Mindy news for you! This week, it was announced that Mindy Kaling and 3 Arts Entertainment have optioned Alyssa Mastromanaco’s best selling memoir Who Thought This Was a Good Idea? And Other Questions You Should Have Answers to When You Work in the White House. 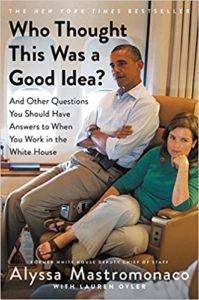 The recently released memoir is an account of Mastromanaco’s time work with Barack Obama. She worked with President Obama for over ten years during his time as a senator, on the campaign trail, and eventually in the White House as assistant to the president and director of scheduling and advance from 2009-2011 and as deputy chief of staff for operations from 2011-2014.

Mindy Kaling and Alyssa Mastromonaco met through Barack Obama. No big deal or anything, just meeting people via the President of the United States. The two women have been friends ever since, so it’s not all that surprising that Kaling decided to option the memoir.

According to Deadline: Hollywood, the plan is to adapt the memoir into a TV show, a la other popular White House series like Veep and The West Wing. Kaling will produce the show along with 3 Arts Entertainment.

We will be seeing a lot of Mindy over the next few years, since she’s still executive producing, showrunning and starring in the phenomenal The Mindy Project (which is in its final season), as well as executive producing and set to appear in the NBC comedy pilot, Champions.

I just finished my third re-read of her second memoir, Why Not Me?, so you could say I’m mildly excited to see what Mindy Kaling comes up with next. Plus, who isn’t down to see the TV version of a book about the Obama White House that’s described as “a gossip session with an older sister”?

No news yet on when we can expect to see the TV adaptation of Who Thought This Was a Good Idea? but it’s definitely something to keep on the radar. If you need me, I’ll be reading Mastromonaco’s memoir in anticipation.