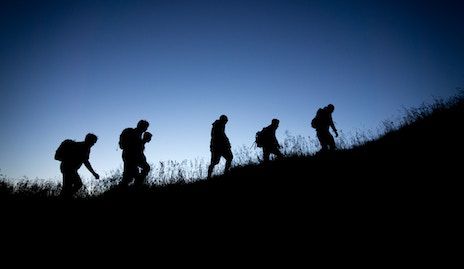 I am just going to come out and say it: The United States is at fault for the current migrant caravan that is currently pushing its way through Mexico. Hell, we are at fault for the instability of Latin America due to American imperialism and our obsession with coups. There is no doubt about it. American interference in Latin America can be traced back to the 1850s when American Filibuster William Walker marched with an army into Honduras in hopes of capturing Nicaragua. He failed and was executed by firing squad in Honduras.

Unparalleled research by historians and policy experts proves we are the root cause of the instability in many Latin American countries. Many right-wing pundits have said the instability has arisen in a vacuum. That is a fallacy. Vice News said it best when they said “Many historians and policy experts are quick to point out that much of the troubles in Central America were created or at least helped by the US’s interference in those countries going back decades. In other words, the foreign policy of the past has profoundly shaped the present immigration crisis.”

Believe what you will, but these books explain it all. We have blood on our hands, people. If you didn’t know it before, then you will know it now. I highly recommend these historical reads. 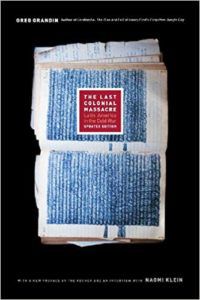 Grandin uses Guatemala as his case study in this book. Guatemala experienced a 36 year civil war that began in 1960 and did not end until 1996. Over 200,000 were murdered during those three decades and the involvement of the United States cannot be denied. In 1954, the Central Intelligence Agency backed a local-led coup commanded by Colonel Carlos Castillo Armas that overthrew the democratically-elected president, Jacobo Arbenz. The CIA’s reasoning behind the coup? Jacobo Arbenz, who was nominated democratically, was considered a “communist threat.” Arbenz nationalized the U.S. owned and operated United Fruit Company and the U.S., needless to say, was not pleased. Castillo Armas declared himself president and proceeded to reverse land reforms that benefited poor farmers and removed voting rights for illiterate Guatemalans. From 1960 on, the country saw violence like it had never before experienced. Some of the worst massacres occurred at the villages of Dos Erres and Panzos. Hundreds were murdered and buried in mass graves. This is where the term “los desaparecidos” (the disappeared) was born. Grandin’s scholarship is unmatched. This book is a must read. 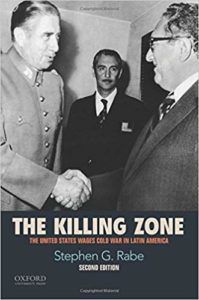 Rabe is an author and eminent historian who specializes in U.S. foreign relations, the history of slavery, and Latin American relations. In his book The Killing Zone, Rabe does not concentrate on a single country. Instead, he takes a look at Argentina, Brazil, Chile, El Salvador and Guatemala and argues that the sense of accomplishment that occurred at the end of the Cold War came at the expense of hundreds of thousands of Latin American lives. Dictatorships and authoritarianism led to terrorism and major abuses of human rights, often backed and endorsed by U.S. intervention. (Just look at Kissinger on the book cover with a smile on his face). Rabe argues that U.S. intervention in internal affairs of Latin American countries destabilized governments, which also led to the aiding and abetting of those who murdered and tortured innocent Latin Americans. The United States backed and tolerated such horrendous crimes all in the name of advancing our own agenda and stopping the spread of communism. The hundreds of thousands of murdered individuals seemed like a good sacrifice as long as communism did not spread. This way of thinking was irresponsible, murderous and callous. Decades of instability followed. This book is another must read. 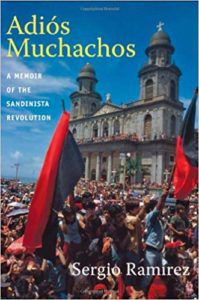 This book is great because it provides a first-hand account of the Sandinista Revolution. Briefly, the Sandinista Revolution (Nicaraguan Revolution) was a campaign led by the Sandinista National Liberation Front (FSLN) to violently oust the dictatorship of Anastasio Somoza. Sergio Ramirez was not only a participant in the revolution, but he led intellectuals, priests and business leaders to support the FSLN and fight against Somoza and his dictatorship. Again, the United States backed the Somoza government, a government that proved it was willing and capable of massacring innocent Nicaraguans. Ramirez and others rose up and decided to defend their revolution against the Contras, an armed counterinsurgency backed by the U.S. The U.S. felt it necessary to intervene in Nicaragua’s internal affairs to supposedly prevent communism and control Somoza’s government. Ramirez does an excellent job of describing “the utopian aspirations for liberation and reform that motivated the Sandinista Revolution.” Again, decades of strife and instability followed. This book is a great read and another example of irresponsible U.S. intervention.

Again, believe what you will, but know that decades of instability in Latin America can be blamed on U.S. Imperialism and U.S. greed. So when some ignorant keyboard ninja tells you to “do your research,” read these books so you can formulate an articulate, well-informed argument that they will not be able to respond to. Happy reading!