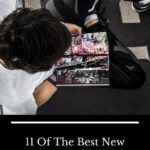 I continue to be deeply into middle grade novels right now—they’re full of whimsical stories, imaginative plots, and well-developed characters. So much good stuff is being published; you’ll want to scoop these books into your arms, hide away somewhere quiet and then read them under a lovely, warm blanket like Bastian in The Neverending Story. 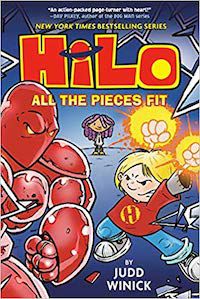 Hilo: All the Pieces Fit (Hilo #6) by Judd Winick

Hilo looks like a regular kid, but he’s actually a robot who came to Earth because he’s on the run from the evil Razorwark. In this action-packed installment, Hilo and his human friends finally battle Razorwark in an epic, ground-scorching battle. Get ready for affecting moments of sacrifice, bravery, and love. Though it isn’t the end of the series, it does tie up the arc that has run through until now.

Baltazar has won both the Eisner and Harvard awards, and this comic is a great entry point to his work. The plot here is sort of like plot in a movie musical—just there to pull together the real action (in a musical, obviously that is the songs, and in this case it’s the vibrant and enthralling battles between characters). Honestly, this comic really took me by surprise and I very much enjoyed how it captures being a kid and making up crazy stories that keep getting weirder and weirder, but you are so jazzed at your own genius. It reminded me of my own childhood, making up detective adventures with my sisters. Good times. 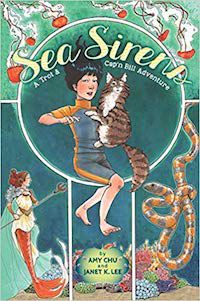 This fantasy graphic novel is about Trot and Cap’n Bill, a Vietnamese American surfer girl and her one-eyed cat, respectively. After getting sucked into an underwater kingdom, they find themselves in the middle of a big battle between mermaids and serpents. Kids are sure to appreciate the beautiful art and the fun adventure story.

This one is a feel-good comic with a fun concept: flying witch veterinarians! Clarion and Nan are witches-in-training, taking care of an adorable flying pig while their boss, Dr. Talon, delves into the big ol’ mystery of where the creature came from. This is another one light on plot, but it’s a non-scary adventure for kids that has cute illustrations paired with a great message about kindness.

Alvarez’s beautiful art and imaginative writing tells the next part of Sandy’s story. During a school trip to the wetlands, Sandy wanders off alone and discovers a new world of magic. Using a vibrant mix of comic and graphic novel styles, the story touches on conservation and mindfulness. Though not as strong in plot as some of the books on this list, the whimsical art definitely carries it through. 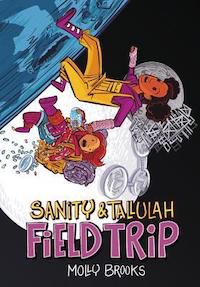 This is the second book about Sanity and Tallulah, and this series is great at mixing real science with sci-fi adventures. These scientist best friends are off on a school field trip to another planet (my school never took us further than a Cabane à Sucre but oh well, that’s Quebec life for ya). Anyhoo, complications ensue (space pirates!), but these intrepid explorers manage to get out okay. 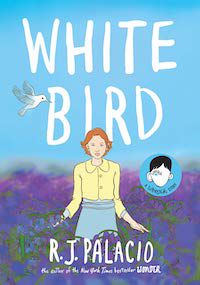 This is a wonderfully written and beautifully illustrated story about a young French girl’s experience in a Nazi-occupied village during WWII; the story is bookended in the Wonder-verse, as the girl grows up to be the grandmother of original character Julian. The art is gorgeous, and I really felt immersed and invested in Sara’s story. Did I cry? Absolutely. Despite the heartbreaking experiences that Sara endures, Palacio doesn’t leave you sad as she focuses on the heroic kindness of people. The story ties in to current events as well, reminding readers that our acts do make a difference even if it doesn’t feel like it at the time. 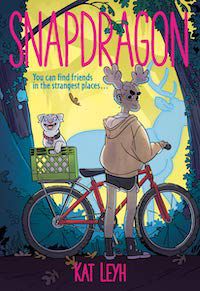 I want a million more volumes, please. The characters are wonderful, the art is fun, and it is full of diversity. The story follows Snap, a badass misfit who struggles against bullying, as she befriends the town witch and begins to discover her own powers. I will be recommending this book all over the damn place (starting right here).

Moth Hush is 13, a witch-obsessed outcast living in Founder’s Bluff, the stifling town where she lives. Then she finds out that she actually has magic powers and they’ve been passed down through her family, but the reason she never knew is that her mother won’t use magic anymore. Throw in a Yiddish-sprouting cat and poof! This story is the perfect mix of funny, moving, and action-packed.

Every year on the night of the Autumn Equinox Festival, Ben’s town has a tradition: they float paper lanterns down the river. Once the lanterns disappear from view, legends suggest that they’ll float off to the Milky Way and become stars. Ben and his friends make a pact to bike along the river until they can find out if these legends are true, but only Ben and a boy named Nathaniel are keen to stick it out. Andrews’s story has a Narnia-esque quality; it’s one of those stories where strange and wondrous things happen and readers get swept along for the ride. I enjoyed it, and I was keenly aware that children would love it. The magical world shown in these pages is gorgeous and filled with interesting characters and witty dialogue. 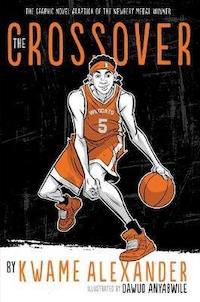 The Crossover is a graphic novel adaptation of Alexander’s award-winning novel, and I actually liked it even more than the original. The art by Dawud Anyabwile perfectly captures the rhythm and attitude of Alexander’s poetry. Twins Jordan and Josh Bell are both obsessed with basketball, until Josh meets a girl and falls in looove. The boys suddenly can’t seem to get along, but Josh tries to pull the family back together as their father struggles with persistent health issues. Gorgeous and heartbreaking.

These will not disappoint you, and I can’t recommend them enough. Most are good entry points for kids who struggle with motivation for reading, but they are also great for anyone who just wants a beautifully illustrated adventure.