The #metoo movement has me thinking about stories, women’s voices, and history. About suppression and patriarchy and context. About fairy tales and their tellers. 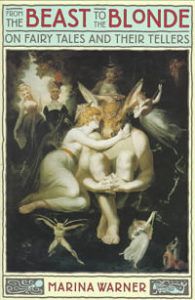 In From the Beast to the Blonde, scholar Marina Warner explores the suppression of women storytellers in Western fairy tales. The first half of the book traces the history of female storytellers—from French literary writers like Marie-Jeanne L’Heritier  and Marie-Catherine d’Aulnoy to the Grimm brothers’ mainly female sources (like Dorothea Viehmann) to Mother Goose.

Besides Mother Goose, are these names familiar to you? Probably not, unless you’re as enamored by fairy tales and their history as I. Patriarchal culture has ensured we remember Charles Perrault and the Brothers Grimm, but not their female counterparts.

The second half of From the Beast to the Blonde examines specific tales within their historical context, and what those tales would’ve meant to women storytellers and their listeners. For instance, Bluebeard tales (where a girl marries a rich stranger and discovers in a secret room the body parts of his previous wives) reflect the historical reality of an early death due to childbirth (in 1800, for example, the average lifespan for a woman in Burgundy was 25). Many widowers remarried, and their previous wives would of course have been a source of fear for the new bride, and the marriage bed threatening. Bluebeard tales serve as both warning and catharsis for teller and listener.

I’m going to go on a bit of a digression, but it’s all connected.

For Halloween last year, I held a costume contest in my college Freshman English class. Students received extra credit if they dressed up and related their character to something literary—a movie script, novel, etc. To accommodate my pregnant belly, I dressed as The Big Bad Wolf, after he’d swallowed grandmother.

I knew the students would already be familiar with the Grimms’ version, where the woodcutter saves Little Red Cap and her grandmother. I decided against the Charles Perrault version, where the wolf eats Little Red and ends with the moral that girls shouldn’t talk to strangers. Instead, I told my students what’s believed to be an older version of LRRH, one not frequently told anymore, “The Story of Grandmother.” (I should note here that Italo Calvino collected this fairy tale for Italian Folktales, another male compiler.)

For those of you unfamiliar with the story, it begins much the same as the others. But it becomes more and more unfamiliar as the story progresses.

Once upon a time, Little Red’s mother asks her to take a loaf of bread and some wine to her grandmother’s house in the woods. On the way, a wolf approaches Little Red and asks her where she’s going and what path she’s taking.

Little Red responds that she’s taking the path of needles, so the wolf takes the path of pins and beats Little Red to Grandmother’s house, where he promptly eats the grandmother, puts her flesh on a plate in the pantry, and her blood in a cup on the table.

When Little Red arrives at her grandmother’s, she knocks on the door, and the wolf-as-grandmother says to open it right up, it’s locked with a wet straw.

She opens the door, and sees the wolf-as-grandmother in bed.

“You can find dinner in the pantry,” the wolf says, “and drink on the table.”

This was where my students started becoming uncomfortable.

When she’s finished, the wolf says, come join me in bed. “I can’t go to bed with my clothes on,” Little Red says, and wolf tells her to throw her clothes in the fire. First, she takes off her apron and throws it in the fire, then her dress, then her shift, until finally she’s naked before the wolf, and must climb into bed.

Now my students were squirming. They’re shocked. I saw it on their faces—they didn’t want to hear the rest of the tale—but I continued anyway.

And now the wolf should eat Little Red, right? That’s how the story goes.

So the wolf ties a rope around Little Red’s waist so she won’t escape, and lets her outside to pee. After waiting and waiting, he calls out “What, are you shitting out there?” and when he hears no response, he goes outside to check on her. He discovers Little Red has tied the rope around a tree and escaped. He chases after her, but he’s too late. She’s home safe; the doors locked. Little Red is no wolf’s meal.

(Angela Carter retells this version, by the way, in the short story “The Werewolf,” which can be found in her fabulous collection The Bloody Chamber.)

My students were shocked after I told them this version. LRRH shouldn’t be about sex. It’s all wrong. The woodcutter saves her. She’s supposed to be an innocent. “Is she not innocent here?” I asked. “No,” they responded. “She ate her grandmother. She undressed. It’s her fault.”

And here we see rape culture, both in the tale and in the student responses.

She shouldn’t have dressed like that if she didn’t want the attention mirrors the cat’s warning to Red. Why did she flirt with the wolf? Why’d she undress like that, and get into the bed? She knew he was the wolf at that point; the cat told her.

Most of us know why. Survival. If Little Red had immediately confronted the wolf, wouldn’t she have been eaten right then and there? Little Red survived, she saved herself, yet the students prefer the version where she’s eaten and later saved by a male hero.

“The Story of Grandmother” is my favorite LRRH version because Little Red saves herself. It’s a story about rape, consent, and escape. But not everyone escapes. Many of us don’t, or at least, not every time.

With the #metoo movement, we’re hearing from the wolf’s survivors, we’re hearing about what happens after Little Red escapes the wolf and makes it home. She is scarred. Of course she is. Her grandmother is dead, and she’s almost been raped. But instead of letting the story end there, she speaks. She tells her tale as a warning.

In the old days, these warnings told of husbands who murder wives so they can marry the next hot, young thing, of rape and trickery and all the ways patriarchy punished women’s sexuality.

It’s not so different now, except the truth is no longer embedded in fairy tale. As fellow Rioter Emma Allman observed, “fiction speaks the very truths the power structure is trying to sweep under the rug.”

Women are reclaiming their stories. We’re saving ourselves. This is the story of survival we need to hear. That the wolf can be brought down by our voices. We don’t need woodcutters. We refuse to be swallowed and made into a moral that upholds patriarchal structures.

The fairy tale we need right now is that together, our stories can make a difference. And I think that’s exactly what’s happening.

Want to read more about the women behind the fairy tale? In addition to From the Beast to the Blonde, check out Clever Maids and Wonder Tales for six classic French fairy tales, five by women authors.