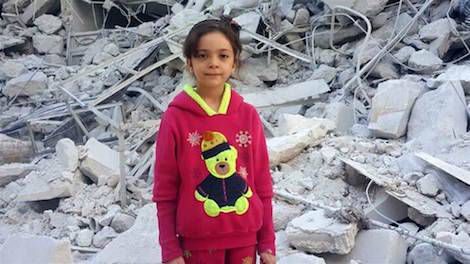 Bana al-Abed is a 7 year old Syrian girl who lived in the city of Aleppo. She was there at the height of the siege that you may have read about in the news at the end of last year.

The siege of Aleppo was one of the most heartbreaking stories I covered for the newspaper I work for, the Guardian. Tens of thousands of civilians were living under siege in the ancient metropolis, one of the oldest continuously inhabited cities in the world. No food, water, medical supplies or aid of any sort could make it into the besieged part of the city in those last few months, while people like Bana endured bombing with all sorts of weaponry, including ferocious airstrikes by the Russian and Syrian air forces, incendiary weapons, bunker buster bombs and even chlorine attacks.

She became a symbol for the suffering of the civilians, a 7 year old girl trying to survive one of the most savage conflicts since the second World War. She, along with her mother, who studied English in Aleppo, began tweeting about their life under bombardment back in September of last year.

“I want peace,” was her first tweet. Another was a picture of her with a book, saying “I am reading to forget the war.”

When she said she would love to read the Harry Potter series, author JK Rowling took note and sent her electronic copies of the book so she can read amid the bombing. Her school would later be destroyed, along with her home. The image of her hiding in a corner of her room while the airstrikes go on is one I cannot forget.

I interviewed Bana and her mother one night in October over Skype. In the middle of the interview, I could hear the sounds of machine gun fire from the planes stalking the city’s skies. I could barely imagine how they could live through that day and night. I imagined her trying to read under the covers with a flashlight, doing her best to block out the din of fighter jets and the distant roar of a missile striking its target.

Bana is now safe with her mother Fatemah in Turkey, having left Aleppo after a ceasefire deal. And she’s writing a memoir of life under siege.

Simon & Schuster said they’re planning to publish the book in the US in autumn, and it will be called “Dear World,” a phrase oft-used by Bana and her mother in their tweets from Aleppo.

I for one am looking forward to reading it. Often lost in the debates we have about refugees and their impact on society, our responsibility to help them seek and find a better life away from the bombs, their religion and the color of their skin, are the voices of the people themselves who fled the death and destruction of their homes, unfiltered by the media.

Here’s hoping Bana and the other children still stuck under deadly skies, or in the refugee camps of the world, find peace one day.