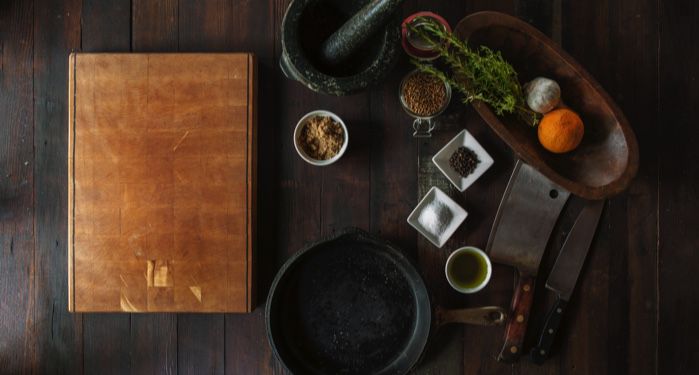 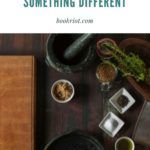 As Dana Staves wrote in “A Really Brief History of Cookbooks,” the genre has been around since the time of tablets. It was probably hard to keep clay tablet cookbooks in circulation. There have been reports of gentlemen keeping written recipe collections during the early medieval period. But it’s not until the 10th century that we have one that stayed in circulation. 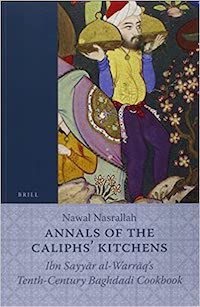 This was Ibn Sayyar al-Warraq’s Kitab al-Tabikh (Book of Dishes). It was brought into acclaimed English translation by Nawal Nasrallah (2007).

Nasrallah’s translation appeared as Annals of the Caliphs’ Kitchens: Ibn Sayyar al-Warraq’s Tenth-Century Baghdadi Cookbook in 2010. Nasrallah’s medieval cookbooks not only give real, useable recipes, they also help the reader travel in time. In addition to the printed cookbooks, she also is continually adding recipe additions at “In My Iraqi Kitchen.” (Editor’s note: translation information has been updated.)

With every recipe, we get a bit of history, some cooking advice, and sometimes a few stanzas of poetry.

For instance, when she writes about eggplant, we learn that eggplant was served at a feast given by Assyrian King Ashurnasirpal II in the 9th century BCE. The Arabic word for eggplant, badhinjan, might have come from beidh al-djinn بيض الجن, or “eggs of djinn.” And that, even though physicians considered it unhealthy, poets wrote odes to eggplant.

One, by poet-gourmand Kushajim, compares the taste of an eggplant to the saliva of a generous lover. (Um, ick?) In Nasrallah’s translation, he describes the eggplant as: “A pearl in a black gown, with an emerald set on it, from which a stem extends.”

Cookbooks are something the contemporary reader takes for granted, like schoolbooks and self-help. But, according to food scholar Charles Perry, they are a latecomer to world literature.

There are the clay tablet cookbooks mentioned above, which couldn’t have been very practical. A Roman cookbook put together in the 2nd century. Then we have no evidence of cookbooks in circulation until al-Warraq’s. 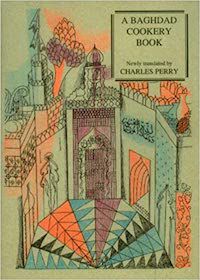 But once the 10th century hit, Perry writes, “there was a sudden explosion of cookbooks in Arabic.”

In 2005, Perry published a translation of Ibn Sayyar al-Warraq’s Kitab al-Tabikh as A Baghdad Cookery Book. He also translated the later Kitab Wasf al-Atima al-Mutada, which appeared in the collection Medieval Arab Cookery. Perry also translated an anonymous Andalusian cookbook from the 13th century. It’s available, in its entirety, online.

Then, in 2017, he published a bilingual edition of the 13th century Syrian cookbook Scents and Flavors. A paperback edition appeared this year.

The recipes range from agarwood breath fresheners to zulabiyyah, a sort of fritter batter. They are as entertaining to read as they are to make, and call to mind a picture of upper-middle class and upper class 13th century Syrian dining.

The literate people in the household might have enjoyed reading the cookbooks, especially for the good advice. However, food scholar Claudia Rodin wrote in her foreword to Scents and Flavors, the cookbooks were probably read aloud to illiterate chefs.

These chefs were clearly highly skilled. For instance, the recipe that mentions zulabiyyah starts out with the chef pitting dates. After that, they must take “blanched, peeled, and ground pistachios” and make these into a paste “with sugar, rose water, and musk.” These are used to stuff the dates. And that’s only the beginning of the recipe!

Hopefully, some of these 13th century chefs had assistants.

Adapted for Current Use

Some of the recipes probably are not for amateurs. But others are easily (and enjoyably!) adapted for contemporary household use.

In addition to Nasrallah’s blog, there are also a few YouTube videos from Charles Perry. But many of the recipes can be adapted on the fly. 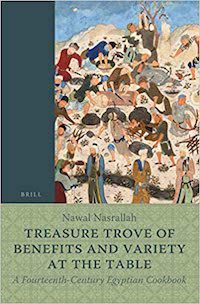 Of all the medieval cookbooks I’ve looked through, my favorite is the 14th century Egyptian cookbook Kanz al-fawa’id fi tanwi’ al-mawa’id. In Nawal Nasrallah’s translation, it becomes Treasure Trove of Benefits and Variety at the Table: A Fourteenth-Century Egyptian Cookbook. This cookbook was published by an academic publisher, so it’s not exactly affordable. But it is also out in paperback this year.

In part, it’s my favorite because of Nasrallah’s introduction, where she walks us through the markets of 13th and 14th century Cairo, giving us a tour of the sights, sounds, and smells. It’s also a favorite because of all the photos and adapted recipes at the back. But most of all because somehow I’ve managed to cook some of these dishes.

Casting aside the advice of medieval physicians, several of my favorites have been eggplant dishes.

Once lockdown is over where I live, I look forward to strolling through markets, picking up more ingredients, and trying more of these recipes.