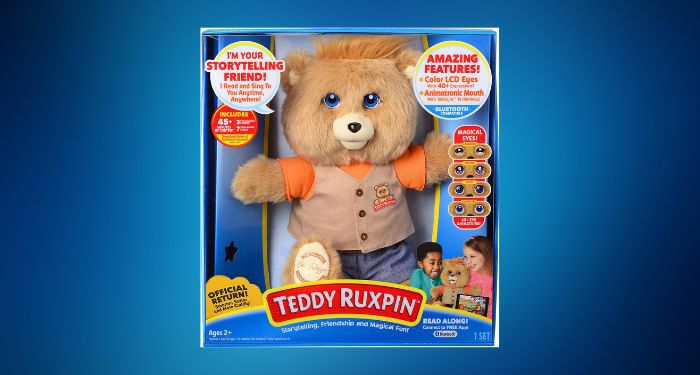 One Christmas morning in the late ’80s/early ’90s, I woke up to find a large present with my name on it under the Christmas tree. I tore it open and squealed with small Mexican child joy at what I thought was a garden variety but very cute brown teddy bear. Stuffed animals were basically my love language back then and I was just jazzed to add another one to my collection, even if this one didn’t look particularly remarkable at first glance.

Except this bear wasn’t like my other stuffed companions. He came in a box, appeared to be wearing a tan smock, and he was a lot less squishy than a teddy should be. He wasn’t just not squishy, his back was straight up hard and boxy as hell. Then my parents explained that this wasn’t any ol’ bear. This bear had a name, and that name was Teddy Ruxpin.

For the uninitiated, Teddy Ruxpin was my best friend one of the best-selling toys of the mid ’80s — I’m talking $93 million in sales in its first year. Teddy was born from the mind of Ken Forsse, an ex-Disney employee who designed animatronic creatures for Disneyland rides like It’s a Small World and Jungle Cruise in the ’60s and ’70s. It was while doing this work that he got the idea to apply the same principles to a stuffed animal that kids could enjoy at home, one that could talk, move, sing, yawn, blink, etc. He got no takers for early versions of Teddy, but that all changed with the addition of a two-track stereo audio cassette tape that lived in Teddy’s back: one track contained audio narration, and the other coding for movements to match that audio. Worlds of Wonder liked this version of Teddy enough to greenlight its manufacturing and a toy legend was born.

So basically what my parents had gifted me was a bear that could tell me stories, complete with books to follow along with said stories. My head just about exploded.

Not technically a bear at all, Teddy was actually an Illiop, a bear-shaped species from the fantasy world of Grundo. This not-a-bear bear was the white hot center of two of my most passionate interests at the time: teddy bears and anyone or anything willing to sit and read to me for hours at a time. My parents were very patient people who read books to me whenever they could, but as the tía to two small children, I can now appreciate what it’s like to read the same story to a child 47 times and have to pretend to be as jazzed about it as the first time. Gifting me a Teddy Ruxpin was really quite genius: I got the reading time, and my parents got a little break from the repetition. Everybody wins.

And let me tell you: I wore Teddy OUT. I listened to those cassettes like my little life depended on it, softly singing, “come dream with me toniiiiight” with every fresh rewind. I memorized the story of the Airship and the Wooly What’s It. Grubby, Newton Gimmick, and Princess Aruzia were my friends in my head. I named several — and I do mean several — dolls after Leota the woodsprite, including one Cabbage Patch doll that I completed an official adoption certificate for with that name, thank you very much. I think I even asked my parents if I could have a Fob as a pet.

Eventually Teddy succumbed to years of excessive use. One of his eyes stopped opening; his voice went wonky and distorted; his cassette tapes wore out and his storytelling came to an end. I was sad and remember asking sky daddy to please heal Teddy in my nightly prayers. Teddy never did make that comeback though, and that was a truth I just had to accept.

(Side note: A new, updated version of Teddy was released back in 2019 or so, but that run does not appear to have been successful. Teddy is only for sale at places like Amazon and resale sites like eBay and Poshmark in small straggler “help us get rid of this damn bear” quantities. I’m no expert, but perhaps that failure has something to do with those White Walker eyes.)

As for the books that Teddy once read me, I kept on reading them even after Teddy’s last hurrah. I eventually outgrew them and moved on to longer, more challenging books, ones I could read all by myself with less pictures and longer page counts. And here’s a little secret: for years when I sat down to read my big-girl books, I’d go to my room, take Teddy out from his hiding spot in the back of my closet, and read to him. Teddy held me down and told me stories all those years. It was only right that I return the favor.