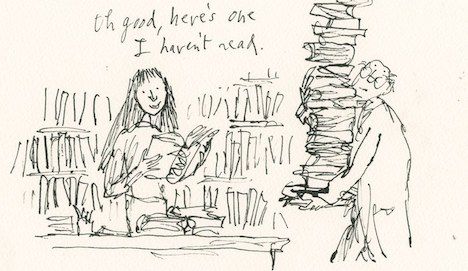 This isn’t to say that Matilda grew up to be complacent. Would she be an activist as an adult? Undoubtedly. But I can’t see her being the face of any movement; she’s not the type to seek glory, but rather someone who just does what she believes is right. If anything, she prefers to work quietly, without drawing any attention to herself. One can get away with so much more that way.

A lovely piece from Mara Wilson reflecting on Dahl’s Matilda at age 30.

Amazon is adding some serious girl power to its TV lineup. The streaming service on Tuesday placed a series order for The Wheel of Time, an adaptation of Robert Jordan’s fantasy novels.

Fantasy fans, this one is for you.

More than a decade since his last book, Thomas Harris – author and creator of one of literature’s most famous monsters, the sophisticated, psychopathic cannibal Hannibal Lecter – is set to release a new novel.

A new book from the creator of Hannibal Lecter that’s not about Lecter.