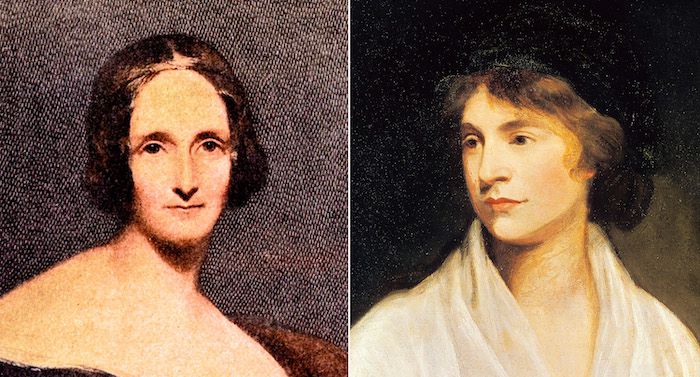 The statue, an objectively terrible eyesore depicting a weirdly tiny naked woman held up by a comparatively huge swirling mass of semi-formless women, has already proven rather controversial. Created by artist Maggi Hambling CBE and made of silvered bronze, it is the result of ten years’ fundraising and sits near the site of the girls’ school Mary Wollstonecraft founded at age 25 after largely educating herself.

As of 2016, a mere 2.7% of statues in the UK depict (historical, non-royal) women, so this ought to be a step forward for equality. A historical woman who was a writer and philosopher should be the ideal subject for such a monument. However.

For unknown reasons, instead of depicting Wollstonecraft, Hambling chose to depict an “everywoman” and gave us a naked cis female form that is, frankly, distracting and bothersome (erasing trans women in the process). By deciding against clothing that would tie the statue to a specific era (such as, I dunno, maybe the one Wollstonecraft lived in), the artist created more questions than answers—perhaps a positive in some artistic circles, but not particularly desirable in most of the world.

Let’s look at some reactions.

While most responses understood who Mary Wollstonecraft is, not all did. Boingboing.net has updated their post to correct themselves, but as of this writing Nerdly News has not.

Mary Wollstonecraft, Mary Shelley, or Mary on the Green?

Mary Wollstonecraft was born in 1759. She had a child out of wedlock, wrote the foundational feminist text A Vindication of the Rights of Women, reluctantly married William Godwin (both were believers in free love and marriage was not a goal but done entirely for the sake of her children), and died of sepsis ten days after giving birth to their daughter, Mary Godwin.

Notable Literature: A Vindication of the Rights of Women

Famous Quotation: “I do not wish women to have power over men, but over themselves.”

Mary Shelley was born Mary Godwin in 1797, learned to read by tracing the name Mary Wollstonecraft on her mother’s grave, created science fiction as we know it when she wrote Frankenstein, and married poet Percy Shelley, with whom she had several children (most of whom did not survive). She allegedly had sex on Wollstonecraft’s grave and is widely believed to have kept Percy Shelley’s calcified heart in her desk after his death (it has been proven that the object was not a human heart, but is possible that she believed that’s what she had).

Famous Quotation: “Beware; for I am fearless, and therefore powerful.”

Mary on the Green (The Mary Wollstonecraft Statue)

Famous Quotation: none (is a statue)

‘Insulting to her’: Mary Wollstonecraft sculpture sparks backlash (The Guardian)