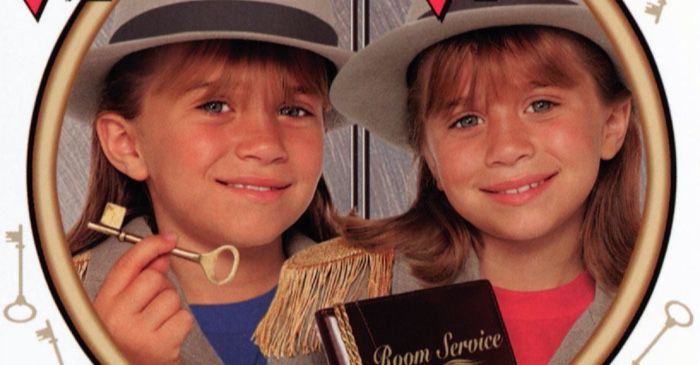 I could not get enough of book series as a preteen. I don’t know if it was a product of publishing trends at the time, or my actual reading preferences.  Each library trip introduced me to a new book series to love and covet. It was like a treasure hunt, trying to read the books of a series in the correct order. In the late ’90s and early 2000s, teen superstars  Mary-Kate and Ashley Olsen added publishing to their impressive resumes. Eight different series were published  between 1997 and 2008, featuring the twins’ carefully crafted personas. These books—paperback, about 150-200 pages—glittered on library racks. I was desperate to read them all, but they evaded me.

I had a friend, let’s call her Morgan, who wanted everyone to know that she was the biggest Mary-Kate and Ashley fan. Her birthday cake featured the twins, grinning up in icing paper. Morgan begged to keep their faces in the freezer to look at later, which sounds sketch, but Morgan was only 7 at the time. Morgan’s mother said no. Like me, Morgan was a bookworm. Morgan, however, only read Mary-Kate and Ashley books. I learned this when I went to stay with her for a few days when my parents were out of town. She showed me her bookshelf, dedicated to her collection. I was horrified and jealous. Her parents bought her a new Mary-Kate and Ashley book every time she finished one. How did they keep up? I could finish one of the books in an afternoon. Books were a rare treat in my household. We got them as gifts, borrowed them from the library. I couldn’t fathom just receiving a book for finishing a different book.  Didn’t Morgan want to read about anything else, anyone else? No, Mary-Kate and Ashley were Morgan’s life. I wonder how Morgan is doing now.

Now, thanks to the internet, I can see for myself the order of all the Mary-Kate and Ashley books were published. The number of books and series is truly overwhelming. I decided not to include the Full House Michelle books, as those were part of the Full House franchise and not published by the Olsens’ company. 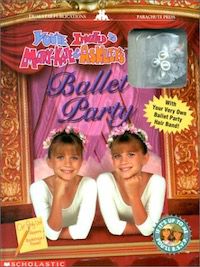 You’re Invited is based off the video series of the same name. The parties were lavish, too complicated for two middle schoolers to throw by themselves, but that was the enchantment. I’m not sure that I ever read this series, but I had the video series on tape. 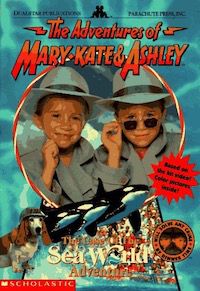 The Adventures of Mary-Kate and Ashley

Mystery was one of my favorite genres as a child. I even had a “detective” themed birthday party one year, complete with bubble pipes and overcoats from the thrift store. This  mystery series was based off the direct-to video series that the twins starred in.  The covers featured the girls in matching trench coats and fedoras posing inside a magnifying glass shaped frame. A basset hound companion, Clue, was added for extra cuteness. These mysteries were slightly spooky, but light and entertaining, still keeping in the videos’ spirit of “We’ll solve any crime by dinnertime!” 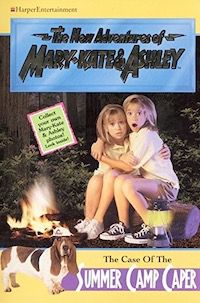 The New Adventures of Mary-Kate and Ashley

Slightly more grown up, and no more trench coats, this series featured the twins in more adventurous situations, sometimes with boy drama involved. The girls attend various camps, after school activities, and trips, theme optional, with Clue providing case notes. The New Adventures felt clever, but still minimal risk. There are over 45 books in this series—perfect for collecting and reading in long stretches. 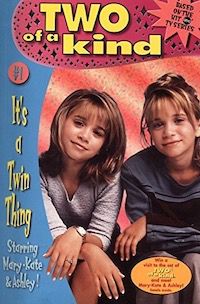 Two of a Kind

Two of a Kind was the Olsens’ first non–Full House TV series. It only lasted for a season, but the book series published successfully with nearly 40 books! The premise of the show was fairly simple: a single dad raising teen daughters, also named Mary-Kate and Ashley. Dad hires one of his students to be part-time nanny/babysitter for them. Half of the book series is written in diary form, which was a new favorite style of mine. The series mostly focuses on  school, crushes, and sibling rivalry. 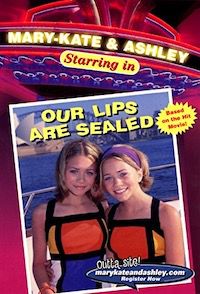 Mary Kate and Ashley Starring in…

Another series I didn’t read, but the Starring in… series was the novelization of the Olsen’s direct-to-video films. I had most of the films on tape, which I watched until the tapes wore out. My favorites were Our Lips Are Sealed and Holiday in the Sun. 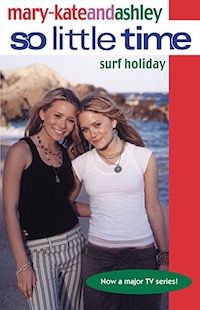 So Little Time was another one-season TV series. The series follows the lives of Chloe and Riley Carlson, twin sisters whose parents are separated. Chloe and Riley, unlike many of the Olsens’ previous roles, do not get along so well. The book series continued publishing until 2008, with 17 titles. 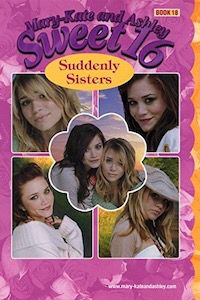 I have no memory of this series, but some reviewers claim it as their favorite between Two of a Kind and So Little Time. This fictionalized version of the twins’ 16th year is busy with learning to drive, school, friends, and incredible summer internships at successful magazines. 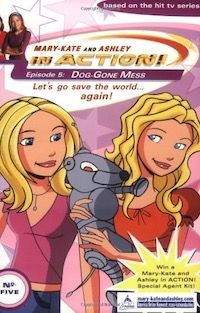 Mary-Kate and Ashley in Action!

One last one-season TV series that spawned a book series. The In Action! Series saw the twins as special agents Misty and Amber. Each episode/ book taking place in a different locale.  With their talking dog Quincy, Misty and Amber take on ridiculous villains and their evil plans. I loved the Saturday morning cartoon, but I don’t remember reading the book series.

Anyone else have fond memories of collecting and reading Mary-Kate and Ashley books? What other series did you love as a kid? Let us know on Twitter or Facebook.

I previously wrote about what American Girl meant to me.

Visit our Middle Grade Archives for more nostalgia, books to read and share, and news.