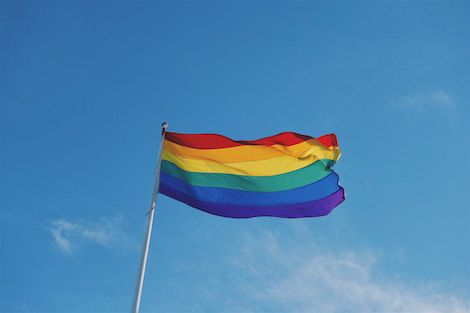 If I asked you to identify the year when Marvel debuted one of its first—if not its very first—gay couples, what would you guess? Sometime in the past decade, perhaps? Maybe the ‘90s? Try 1982. That’s the year Arnie and Michael debuted in the pages of Captain America.

Arnold Roth first appeared in Captain America #268. He’s in his sixties, overweight and balding. He kind of looks like that schlub who ran afoul of the Joker in the Batman: The Animated Series episode “Joker’s Favor.” In other words, he is adorable in his ordinariness. 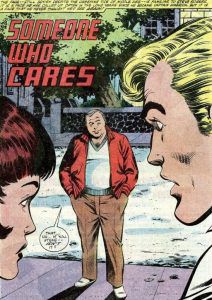 Arnie introduces himself to “Stevie”

A couple of issues later, we get Arnie’s backstory. He and Steve Rogers grew up together during the Depression. Arnie, being bigger and stronger, protected his fragile friend from bullies. The two frequently double-dated, with Arnie much more enthusiastic about it than skinny wallflower “Stevie.” Arnie knew Steve so well that he was able to recognize his old friend even behind the mask and bulk of Captain America.

Like most young men, Arnie joined the military during World War II. But postwar life wasn’t easy for him. He resorted to less-than-legal means to support himself and developed a gambling addiction.

And then he met Michael.

Michael is a schoolteacher, and as good and kind as they come. Arnie stopped gambling for his sake, and after ten years of “rooming” together, he still says Michael is the best thing about his life. That’s quite an accomplishment for a dude without a surname.

But Arnie just couldn’t escape his past. After drunkenly bragging that he knew Captain America, some unsavory types kidnap Michael to force Arnie into delivering Cap to them. Arnie can’t do it in the end, and Captain America successfully rescues Michael. 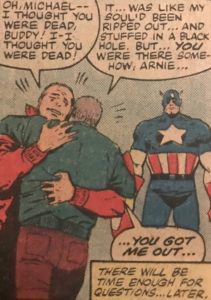 This being the early 1980s, the comic couldn’t just come out (ha) and say that Arnie and Michael were romantically involved. There are plenty of unsubtle hints, though. Post-rescue, Arnie cries as he embraces Michael, and Michael says that thinking of Arnie got him through his ordeal. Cap stares awkwardly as they hug, and the narration box knowingly reads, “There will be time enough for questions…later.”

It sounds ominous, but fret not. While we never see Steve ask any “questions,” he clearly doesn’t disapprove of the answers, since he remains friends with Arnie and Michael even after this issue.

Sadly, this love story does not have a happy ending. In Captain America #277, Michael is kidnapped—yes, again—and this time, the experience proves fatal. Arnie himself would die of cancer in Captain America #443, minutes after Cap says his final goodbye.

Arnie Roth may not be Marvel’s best-remembered gay character, but his legacy lives on in other ways. If you’ve seen the 2011 film Captain America: The First Avenger, you probably recognize much of Arnie’s life story as the one transplanted to Bucky Barnes in lieu of Barnes’s original origins as a teen army mascot turned sidekick. (The subject of whether MCU Bucky also inherited Arnie’s sexual orientation has, of course, been hotly debated by fan fiction writers for years.)

However, Arnie and Michael’s love deserves some love in its own right. Their story isn’t perfect; they weren’t allowed to come out, and they don’t get the happily ever after they deserved. But for what little time we see them together, they are presented as a down-to-earth, devoted couple without even a whiff of the stereotypes that still dictated how gay men were portrayed. They may not run around in colorful costumes or have super serum running through their veins, but they are exactly who they need to be: ordinary, loving and lovable. Considering they were created in 1982, that’s pretty darn super.