I loved superheroes well before I loved comics. In fact, it was the superhero thing that first made me think I’d like comics. Even so, I avoided the Marvel and DC worlds from the start.

Instead, I turned first to Fables, and from there went on to tackle many other similar small press and imprint comics that walked the line between fringe and well-known—Saga, Lady Killer, Bitch Planet, and so on.

Ultimately, what I really love most about comics is the utter strangeness they offer, which can be harder to find in other media options, and these and other titles satisfied this for me just as much, if not more so, than a Spiderman or Superman could.

But I have to confess that the main reason I avoided these franchises had nothing to do with genre or style, but rather the sheer quantity of content that existed within these richly entangled universes.

Where does one even start?

And the question that scared me even more: where can one possibly end?

The options within these universes are bottomless, and my acute FOMO when it comes to intertwined stories makes this level of world-building an utter disaster zone for me.

So I stayed away.

Then, the movies started, and I was caught in Marvel’s web before I could realize what had happened to me.

The Christopher Nolan Batman trilogy (yes, he’s DC, but bear with me a moment) primed me to eager to devour whatever superhero came next.

Meanwhile, the Avengers cast also spun off into TV with Agents of SHIELD, where the plots geniusly (from a marketing standpoint at least) intertwined with the major world events of the movies.

And then Agent Carter.

And more movies. And spinoff TV series. And Internet series.

I officially can’t keep up anymore. This universe is multiplying like the Blob and consuming everything in its path.

And now, DC is catching up, with its own cast of standalone movie series (that are finally starting to get good thanks to Wonder Woman and Patty Jenkins) and its own team series with the first Justice League film dropping this November.

You can stop now. You trapped me. 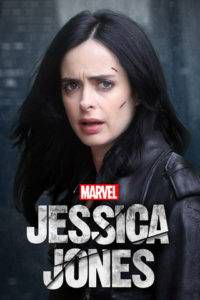 This knockout success gained impetus for another expansion of the world on Netflix, stretching off the big screen, beyond the small screen and into the Internet itself.

Now it’s not just her ongoing series, but also three more superheroes, all inhabiting Marvel’s New York City, and forming their own interconnected sub-web thanks to this summer’s Defenders.

Which brings me to some questions:

To date I’ve only been able to make a few cuts (such as, ahem, Iron Fist), and a lack of time essentially forced my hand on those—even Iron Fist I would have liked to have seen, simply to form my own better opinion about its problems.

In the meantime, I’m trapped.

I have yet to find a good way to cope with this problem. Which leaves me desperately trying to scoop up as much of the Marvel world as I can, and also function as a human.

Have you figured out how to escape, or at least moderate? Send help. (In the comments.)

In the meantime, I guess I’ll just tune in to Inhumans and wait for the next season of Jessica jones to drop.