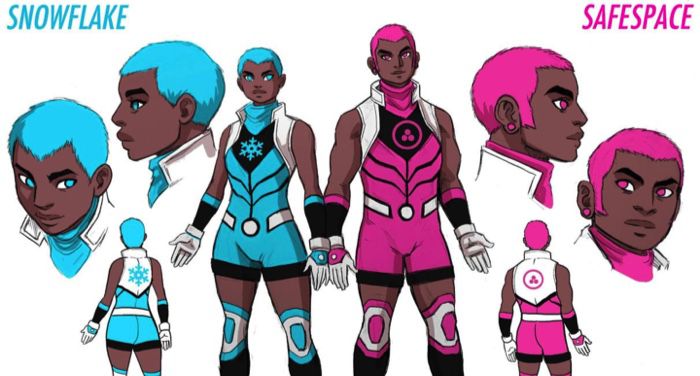 Last night I stumbled upon the announcement and character designs for Marvel’s first nonbinary superhero. They are part of a new team of characters who are part of New Warriors. Written by Daniel Kibblesmith and illustrated by Luciano Vecchio, New Warriors #1 goes on sale April 15. I was ready to be excited about this but instead, I just have a lot of questions. 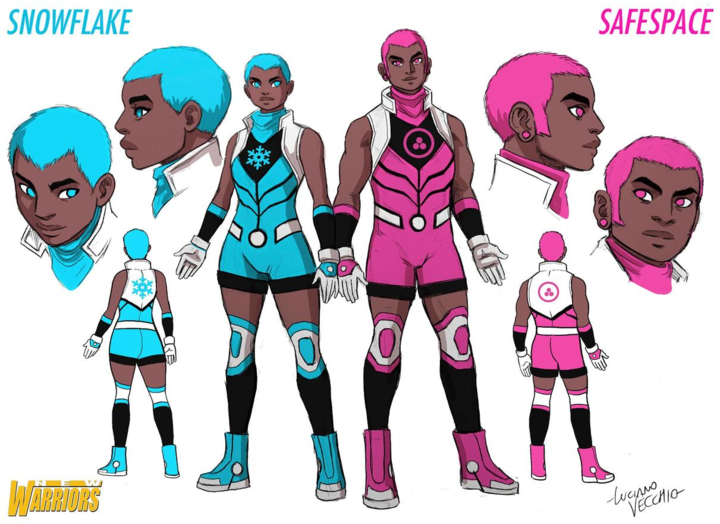 Why does the nonbinary character have a name (Snowflake) that is literally something we get called by transphobes? Their twin’s name, Safespace, is no better. Why not go ahead and name them Tr*nny or H*she?

Kibblesmith said “It’s this idea that these are terms that get thrown around on the internet that they don’t see as derogatory. [They] take these words and kind of wear them as badges of honour.” But as a cisgender writer, you do not get to reclaim transphobic insults. It’s not yours to reclaim. All I can see with the name Snowflake in this context is that that’s what the writer thinks of me and thinks it’s okay to call me. It’s far from the worst insult out there, and I do reclaim it for myself, but that doesn’t make this okay, or not transphobic.

Why are Snowflake and their twin Safespace colour coded in binary gendered coloured costumes? Of course blue and pink don’t actually have genders, but colour coding is still a real thing and is very significant in art. This was a very deliberate choice and it doesn’t make a lot of sense.

Did the creative team get any nonbinary input on this? All of the reactions I’ve seen on Twitter from nonbinary and transgender folx have been horrified, and frankly embarrassed. Did they work on this at all? The end result looks like the only work they did was to make the characters as much a transphobic joke as possible. These are not nonbinary characters; they are jokes about our existence. They really had to reach to make this big a mess.

Quite apart from the transphobia, why are the names so shit and out of touch? Snowflake is at least a feasible name that you might choose for yourself. Safespace and Screentime are just terrible names. Trailblazer is slightly better but not much. The vampire is called B Negative, which is somewhat lazy.

Except for the vampire, all of the New Warriors appear to be people of colour (primarily Black). So why is the creative team made up of two white people? Given how badly they have done at telling nonbinary stories I doubt the characters’ Blackness will be handled any better. Which is a shame. Having characters who are both nonbinary or transgender and people of colour really matters. We need these characters but we need them told by #OwnVoices creators.

This one is tricky because there is no such thing as “nonbinary presentation”. However, looking at Snowflake and Safespace next to each other there is a lot of binary cisgender coding. Snowflake is short and slim with boobs but wearing blue. Safespace is tall and muscular with a flat chest and sideburns. Nonbinary people can look like that! And that’s okay. But nonbinary people can also be more obviously transgender, with more blended gendered characteristics. And I want to see that too! In a world where being and looking transgender/transsexual is so stigmatised, making your nonbinary characters indistinguishable in appearance from your cisgender characters is a choice. It’s a choice that tells those of us who don’t fit into your transphobic cis-binary boxes that we’re too much, too far.

Which leads on to the next question, which is about how the word ‘transgender’ is never used here. Not all nonbinary people are transgender. But many are. And steering away from that word is another layer of the “take trans concepts but make them palatable to transphobes’ vibe this has.  It seems much more likely that the creators choose not to make them transgender because of underlying transphobia than that they were invested in telling the stories of nonbinary folx who aren’t trans. In the end, this does a disservice to all nonbinary folx regardless of our trans status. 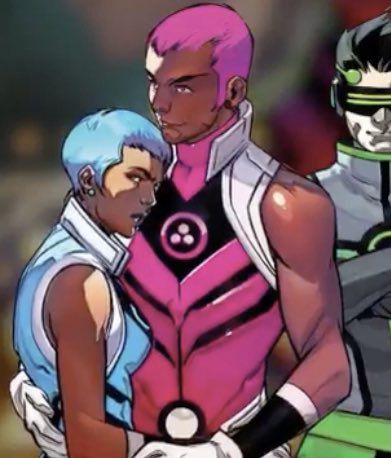 Finally, when will comics artists stop drawing siblings like they are lovers? Why is this a thing? I have three siblings and um…we don’t hold each other like that.

So instead of reading this hot mess of a comic, try out this anthology of nonbinary comics by nonbinary creators: Heartwood: Nonbinary Tales of Sylvan Fantasy.