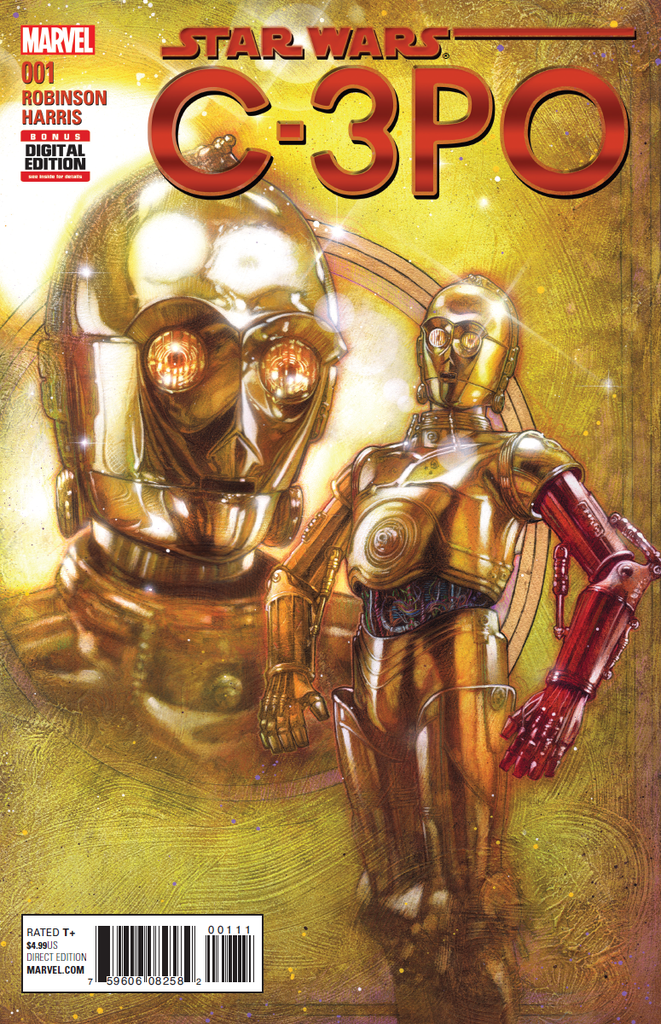 If you’ve watched Star Wars: The Force Awakens, and most of you have, going by the global box office take of over $2 billion, you know that during the movie, C-3PO makes his reappearance with a new and very different arm. A bright red left arm to be precise – remember this it’s important for the puns later. Near the end of the movie in the last big group scene, his arm is golden once more. The movie never explains either how C-3PO got a red arm or why it’s suddenly replaced again. Now we get some answers to this harmless puzzle at last from the prissy droid himself – with a little help from Marvel.

The story of C-3PO unfolds in the release of the comic C-3PO from writer James Robinson, artist Tony Harris, letterer VC’s Joe Caramanga. It’s in one language right now; three million other languages are possible later, but I wouldn’t bet on it. We open with a starship crash landing on a planet; the resulting explosion kills or destroys everyone on board but six droids, one of whom is Goldenrod. The droids, including one droid on the side of the First Order, then have to work together to escape the merciless planet they find themselves on.

The most interesting thing for me was the discussions around droid loyalty and memory wiping: how the droids remember snatches of old memory from previous wipes and how those memories stay with them and influence them now. The droid sentience hierarchy is also something that’s touched upon here, but I wish it would go a little more in depth. Just how sentient does a droid to be before it’s considered a life form? If it’s alive then how it is OK to own droids, let alone wipe their memories and start them over?

The cover by Tony Harrison is great, a classic shiny C-3PO with a oil paint styled backdrop. The inside art is less spectacular. Mostly for the art direction, which has the questionable choice of doing close-up face shots for the droids that are talking or being talked about. This might work with people, but the droids here don’t have faces that can express emotion, so the close-ups are pointless. It would have been much better to show more emotion through body language. It doesn’t break the comic but it’s a strange editorial choice. The art style itself reminds me more of the stylised messy artwork from 2000AD than that representing the Star Wars universe.

BB-8 and Poe Dameron both make brief but welcome appearances here, though oddly Poe is hidden away behind the star fighter breathing mask. I can’t help but think that this comic was designed to come out either just before or at the same time as the movie, but it overran somehow. The comic’s almost a double a normal monthly issue at 37 pages but it weighs in at $4.99, the expensive end of comics. The extra length is welcome. I can’t say I was blown away by this single issue C-3PO, despite the welcome detour into droid morality and memory trauma.

It never explains why C-3PO removes the red arm and replaces it with a golden one in The Force Awakens though. That’s a little plot hole we have to guess at, so feel free to make up your own reason. I went with squirrels. Probably Tippy-Toe. I’ll give big hand to Marvel, they’ve created an h-armless tale here that manages to fill the C-3PO story gap. It’s perhaps not as good as it could have been, maybe they needed an extra hand? C-3PO doesn’t take on the plot single handed but it’s entertaining to see him struggle to become a one arm many…I mean a one man army. You’ll have to read the book to see if C-3PO is the only one left and if he’s all right in the end.

Yep, I went there. The C-3PO standalone is a solid story of how the droid gets his red arm and that’s what every Star Wars fan wants to know.