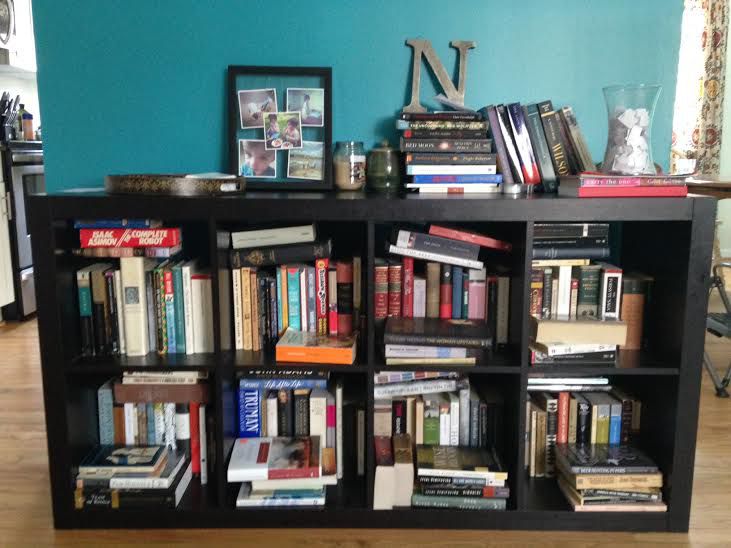 There are as many ways to make a marriage work as there are editions of Pride and Prejudice. I’m a hard person to love–fastidious, rigid as concrete, with the emotional range of a Vulcan–so it is with not a small amount of wide-eyed shock that I can say I’ve been married for almost ten years. And one of the secrets to keeping it together for us is this: he does not, under any circumstances, interfere with the book situation.

The merging of our lives when we got married was almost total. I was 19 and thought marriage meant no boundaries, fresh out of an uncomfortable home situation and wanting to get on with my life, which to me at the time meant doing the Wife thing. We combined bank accounts and debt loads, closet space and chore lists, insecurities and faults. His Star Wars mass market paperbacks and Bob Dylan bios, however, stayed in a cardboard box under the bed while my tattered copies of the works of Charles Dickens occupied all of our limited shelf space. It was part snobbishness (God, what if people think those are mine?), but mostly it was that I wanted one thing, one thing other than bras and pink-handled razors, to be just mine. I Instinctively knew, deep down in my born-a-feminist heart, that this giving of my entire self over to another person to be redefined would not work, so I grabbed hard at what I knew.

As the years have passed, our relationship has cratered and climbed, burned and been reborn, cyclical as a phoenix, just like everyone else’s does (even if they don’t admit it). I’ve gone from letting my life be an open landscape for my husband to wander around as he sees fit to building necessary gates. This thought I will keep for myself. These Saturday afternoon wanderings around the neighborhood will be solitary. I will give this piece of myself to my children, I will give this piece of myself to my husband, and somehow I will keep something in reserve. And the more I remembered that I could define myself as myself and not just “wife of,” the less I treated our bookshelves like they existed behind an Iron Curtain. The more I recalled that I own my own life, the less I felt like I had to exert superficial control over an essentially irrelevant area of our combined existence. At this point, it’s just a habit waiting to be broken. That red Asimov up there in the left corner? Not mine. I’m growing! A hardcover copy of Dune, an old edition of Jurassic Park, the Lord of the Rings trilogy- some of these books I even consider to be “ours.” The surprise here isn’t that this shelf is where most of my husband’s books go, it’s that I’ve given him a shelf of his own at all, and it even lives in the same room as all the other shelves. Much progress. Such slow. Very growth. Wow.

I’m not ashamed of my weird journey from Young And Dumb With A Warped View Of Marriage to Grown-Up Who Knows How To Have A Balanced Existence In A Life With Another Person. We were babies when we met at the altar, and have altered (ha!) and shifted so much I like to say we’ve both been married to ten separate people who all happen to look the same and have the same name. My pendulum has swung from having such a forgotten sense of self that I had to put figurative locks on my bookshelves–BUT THIS SPACE MUST DEFINE ME BECAUSE NOTHING ELSE DOES–to knowing (and admitting) exactly who I am and what I’m about, and saying “our books” or “the books” sometimes instead of the (at this point habitual) “my books.”

So check back with me in another ten years- maybe all those yellowed Louis L’amour Westerns will have finally moved over to live between Anne Lamott and Madeleine L’Engle.