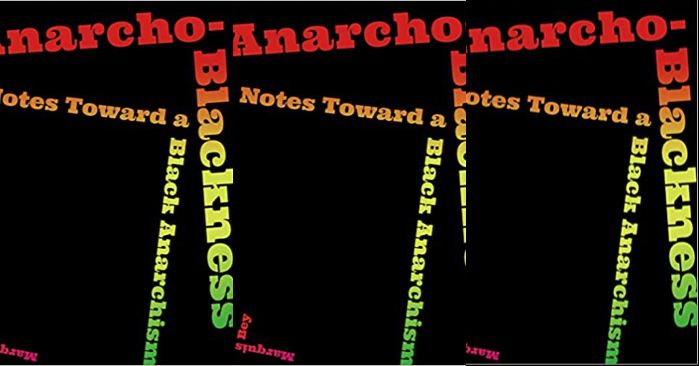 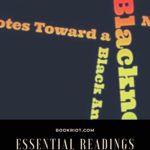 If you don’t know about anarchism, it’s time to learn. Anyone who considers themselves against fascism has been labeled a terrorist in the United States of America, federal police are kidnapping protesters off the streets in major cities, and local law enforcement is regularly dispatched to be our judges, juries, and executioners.[1] If there has ever been a time for radical assembly and community action in our country, it is now.

Many of us are probably familiar with classical anarchists like Emma Goldman or Pyotr Kropotkin, but what they discuss hardly reflects the issues we face today in our current political climate. Contemporary anarchism is built upon the back of its prior iterations and still deals with the fringes of society, but today anarchism incorporates our most pressing issues. The basis of anarchism is freedom for all—no one is free until everyone is free. In today’s world freedom is constantly being fought for, and “in our particular moment…Black anarchism can be found—or sometimes be glimpsed—in movements like that of BLM, or Anarchist People of Color, or Critical Resistance, or the Audre Lorde Project [as well as many organizations].”[2] But getting involved is only part of the struggle. Learning is essential for freedom to ever be actualized, and who we read and the ideas we share will form the organizations and collective actions we put into the world.

Today there are a few scholars who grapple with anarchism and its relation to races and gender, as they see the other issues the classical canon of anarchism contends with, such as class, being highly gendered and racialized. One of the newest and best of these anarchist writers is Marquis Bey. 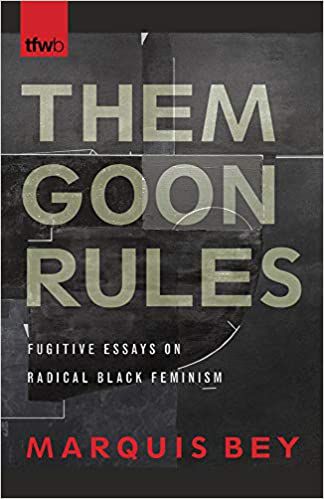 Marquis Bey is the author of Them Goon Rules, published by The University of Arizona Press in 2019 while they were a doctoral candidate at Cornell University. They have since graduated and now hold the position of Assistant Professor of African American Studies and English at Northwestern University. Bey’s new book,  Anarcho-Blackness: Notes Toward a Black Anarchism, was published by AK Press in August of 2020.

Them Goon Rules is a collection of personal essays and critical examinations of Black American life with pieces such as “On Being Called a Thug,” “Scenes of Illegible Shadow Genders,” “Flesh Werq,” and many others. The book is personal, humanizing, and easy to read while having a level of depth that forces the reader to dwell on Bey’s writings days after reading.

Anarcho-Blackness: Notes Toward a Black Anarchism is a diversion from the style of Them Goon Rules, as Anarcho-Blackness is a heavy work of critical theory that prompts rereading and in-depth analysis. The book dwells in the texture and history of the interaction between Blackness and anarchism, which is by no means new but is a topic rarely discussed. As Bey puts it in the introduction, “The history of Blackness, in short, is a history of disruption toward freedom.”[3] This is an undeniably anarchist notion. 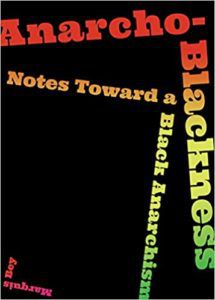 The book fleshes out some of the histories concerning the collisions of Blackness and anarchism, while not wasting time with condemning or detailing the failings of those who came before[4], and does this while meditating critically over what Anarchism’s relationship to gender has been and should be. Bey posits the concept of anarcho-Blackness not as an ideology, but a set of facts and critical musings which we can use when encountering any ideology in the world.

“It is this radical reorientation to which the prefixal anarcho- refers, a departure from the normative, a normativity characterized by the white masculinity of a hierarchical, coercive State.”[5]

Anarcho-Blackness: Notes Toward a Black Anarchism concludes with a manifesto that urges us to find, in anarcho-Blackness, a self-determination unconcerned with individual identity[6], and encourages us to discover different ways of being together.[7] Bey by no means posits this as an easy task, and regarding the work we must put into anarcho-Blackness, they say, “There is no ‘end’ because to know the end is to think one knows the totality of the landscape, a line of thinking that cannot account for that which falls outside the dictates of legibility.”[8] This statement reflects the constant change that we ourselves go through and we as a community must come to terms with. The change will happen, how our world changes is all we have a say in, and I firmly believe Bey points us in a direction to change for the better.

While writing this article, I asked Bey to share some incites concerning their hopes for this concept of anarcho-Blackness:

“I think my hope for anarcho-Blackness is that it is taken up not as a template or rulebook for how to do life ‘correctly’; rather, I hope it propels people to begin to move in the world differently, to relate to others on non-statist and non-authoritarian grounds. My hope is that it infects people, as it were, and seeps into our very worldly inhabitation to the point where we live anarcho-Blackness.”

Though Marquis Bey’s books are a great starting point, there is much more literature on the subject that we all should be reading. Bey was gracious enough to share the most influential books for their writings on Black Trans anarchism, and I believe this reading list will be a great place to leave you Book Riot readers. I hope you take the time to educate yourself on these fronts and support the associations that promote inclusivity and freedom for all.

[1] Legalize Everything by Eric Andre

[2] Anarcho-Blackness: Notes Toward a Black Anarchism by Marquis Bey (Page 105)