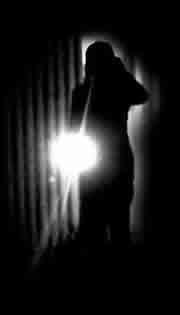 We are thrilled to present this guest post by Margaret Atwood. Atwood, whose work has been published in thirty-five countries, is the author of more than forty books of fiction, poetry, and critical essays. In addition to The Handmaid’s Tale, her novels include Cat’s Eye, short-listed for the Booker Prize; Alias Grace, which won the Giller Prize in Canada and the Premio Mondello in Italy; The Blind Assassin, winner of the 2000 Booker Prize; Oryx and Crake, short-listed for the 2003 Man Booker Prize; The Year of the Flood; and her most recent, MaddAddam. She is the recipient of the Los Angeles Times Innovator’s Award, and lives in Toronto with the writer Graeme Gibson. Follow her on Twitter @margaretatwood.

I was sitting around with some family members discussing “horror” and “terror” over the blueberry pie, when I  gave it as my opinion that “horror” had to do with the body and “terror” with the mind. A spirited discussion took place in which these views were challenged, and I realized I hadn’t articulated my position clearly enough.

Off I went to one of the earliest specialists in horror/terror writing, Ann Radcliffe. She was the author of The Italian, the early Gothic novel that so delighted the young heroine of Jane Austen’s Northanger Abbey. Radcliffe felt that “terror” had a degree of “obscurity and indeterminacy” that contributed to its “sublime” potential, but that “horror,” being unambiguous, lacked this quality. Terror is the fear of something dreadful yet to come. Horror, on the other hand, has a bowl-of-eyeballs yuck factor. That must have been what I meant by my mind/body distinction.

This is a long preface to the announcement that I’ve just reviewed Stephen King’s forthcoming novel, Doctor Sleep, for the New York Times Book Review. This is a questionable thing to do, in that it will be questioned: I anticipate a chorus of disgruntled harrumphs from both sides of the literary pond. From those who think that “literary” authors should stick to their ivory towers and not frolic in the third-class swimming pool, a curl of the lip: why am I slumming? And from those who feel that “genres” are their own private carnival, annoyance that I am sneaking under the fence: what do “literary” writers know about such specialized “genre” wordfeats, anyway?

Quite a lot, as it turns out. Horror/terror tales are rooted in folktales, of which I was an avid reader since the age of seven. (My parents sent away for the collected Grimms’, not realizing that this edition was complete and unexpurgated: no red-hot eyeballs or decomposing corpses were omitted.) To add to that, the complete Edgar Allan Poe was in the primary school library – those were the days in which only the presence or absence of Sex determined what was suitable for children – so I was no stranger to tell-tale hearts, teeth ripped out of semi-corpses, dead women coming back to life through other dead women, and so forth.

Add to this the fact that the Comics Code Authority didn’t impose its rules until 1954 – a little too late for me. These rules included the prohibition of the words “horror” and “terror” on the covers, and of “depravity, lust, sadism,” gruesome pictures, the walking dead, torture, vampires, ghouls, cannibalism and werewolves. Indeed, none such appeared in the comparatively wholesome pages of Captain Marvel, Superman, or Batman. But the rules applied only to color comics, and the outlawed motifs flourished unchecked in the black-and-whites that a young person such as myself could purchase at the corner drugstore, read after lights-out, and then deposit under the bed of an older brother because the things were just too horrifying to store in one’s own room.

I was therefore well-prepared to run my little sister’s Hallowe’en-themed birthday parties. Having decorated the cake with pumpkins and bats, I painted my face green, shone a flashlight under my chin, gathered the quivering little party-goers under the dining–room table, and fed them a regurgitated mash of the above-mentioned materials. These parties were very popular, but there are a number of traumatized sixty-two year olds still walking the planet.

Such experiences equipped me for my later academic study of the eighteenth-century, nineteenth-century, and early twentieth-century Gothic, including the well-known classics, Frankenstein and Dracula, but also more “literary” ghost-and-weirdness tales such as those of Bulwer Lytton, Charles Dickens, Henry James, R.L. Stevenson, and M.R. James. Name your present-day horror trope: each has a long genealogy.

It also seems to be a general rule that this year’s despised pop shocker may well furnish the next decade’s serious thesis material. What is Beowulf – what is Inanna’s descent to the Underworld – what is the dismemberment of Osiris, not to mention Shakespeare’s Titus Andronicus – but horror/terror shock material of a former age? Yes, some of it was “religious” in intent  It would be, wouldn’t it, as the membrane separating gods and monsters is notoriously thin.

So no harrumphing about my interest in the form, please. Horror/terror and “literature” are not mutually exclusive. In fact, tales of this kind may be among the most “literary” that there are, being both very ancient, and – unlike, say, social realism, in which a real tour of a real meat-packing factory may be involved – derived entirely from other tales. (Hint: there aren’t really any Walking Dead. Sorry. Sad, but true. Therefore all such monsters are metaphors.)

But, you may ask, why do we like this stuff? Ah. That’s another question. Come under the dining room table with me, my dears, and I will answer it.