With Trump in office and two television adaptations of her books receiving critical acclaim, Margaret Atwood is more relevant than ever. The 78-year-old Canadian feminist novelist, short story writer, poet, and critic has already had a long and distinguished career, but current politics have thrust many of her books back into the spotlight, and she certainly has a way with words. Here are 25 inspiring Margaret Atwood quotes that read like a gut punch.

Before I get into the quotes, I must note that Atwood has recently come under deserved fire for her problematic championing of the #UBCAccountable movement in support of a UBC professor and writer accused of sexual assault.

Atwood has released a number of troubling statements about this issue. We have covered it at Book Riot, and you can also read Zoe Whittall’s take on the sexual harassment problem in Canadian literature. As Atwood herself wrote in The Handmaid’s Tale, “Nobody’s heart is perfect.”

Quotes from The Handmaid’s Tale 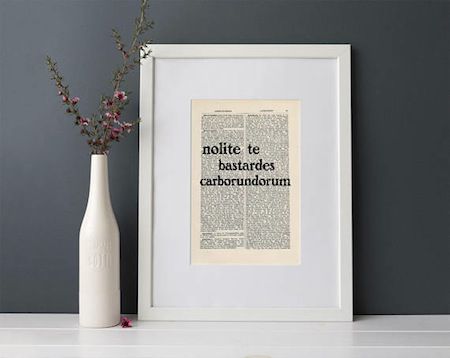 This print of this famous quote from The Handmaid’s Tale (Latin for “Don’t let the bastards get you down”) is available from Etsy seller CartabanCards.

“Nothing changes instantaneously: in a gradually heating bathtub you’d be boiled to death before you knew it.”

“Falling in love, we said; I fell for him. We were falling women. We believed in it, this downward motion: so lovely, like flying, and yet at the same time so dire, so extreme, so unlikely.”

“You can think clearly only with your clothes on.”

“To want is to have a weakness.”

Want more quotes from The Handmaid’s Tale? Check out this Book Riot post. 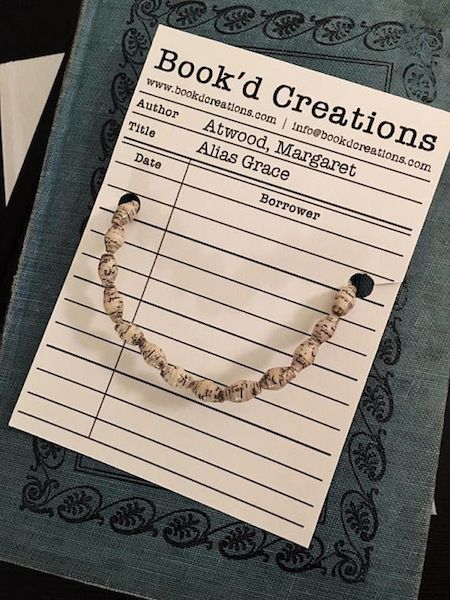 This bracelet is made from pages from a recycled copy of Alias Grace, available from Etsy seller Bookd.

“If we were all on trial for our thoughts, we would all be hanged.”

“When you are in the middle of a story it isn’t a story at all, but only a confusion; a dark roaring, a blindness, a wreckage of shattered glass and splintered wood; like a house in a whirlwind, or else a boat crushed by the icebergs or swept over the rapids, and all aboard powerless to stop it. It’s only afterwards that it becomes anything like a story at all. When you are telling it, to yourself or to someone else.”

“The small details of life often hide a great significance.”

“What is believed in society is not always the equivalent of what is true; but as regards to a woman’s reputation, it amounts to the same thing.”

“Another belief of mine: that everyone else my age is an adult, whereas I am merely in disguise.”

“Knowing too much about other people puts you in their power, they have a claim on you, you are forced to understand their reasons for doing things and then you are weakened.”

Quotes from the Maddaddam trilogy

“Is that what writing amounts to? The voice your ghost would have, if it had a voice?” —from MaddAddam

“After everything that’s happened, how can the world still be so beautiful? Because it is.” —from Oryx and Crake

“There’s something to be said for hunger: at least it lets you know you’re still alive.” —from Oryx and Crake

“Amazing how the heart clutches at anything familiar, whimpering Mine! Mine!” —from The Year of the Flood 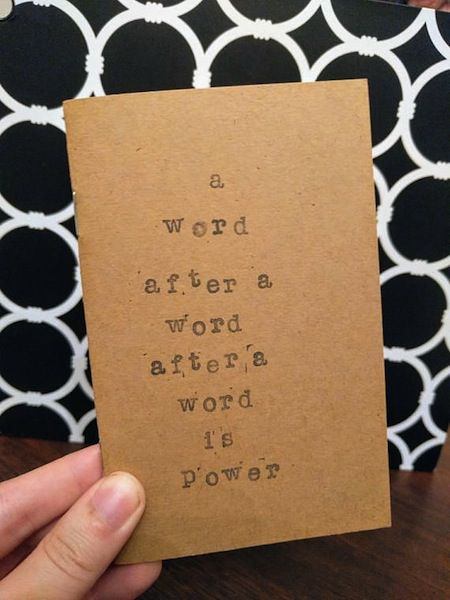 This mini notebook featuring a quote from Atwood’s poem “Spelling” is available from Etsy seller TheFeministCandleCo.

“Get rid of death. Celebrate increase. Make it be spring.” —from the poem “February” in Morning in the Burned House

“You fit into me
like a hook into an eye

a fish hook
an open eye” 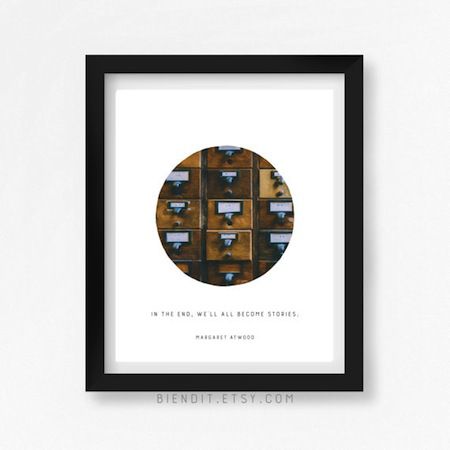 This print of a quote from Atwood’s book Moral Disorder is available from Etsy seller BienDit.

“War is what happens when language fails.” —from The Robber Bride

“All stories are about wolves. All worth repeating, that is. Anything else is sentimental drivel…” —from The Blind Assassin

“Water does not resist. Water flows. When you plunge your hand into it, all you feel is a caress. Water is not a solid wall, it will not stop you. But water always goes where it wants to go, and nothing in the end can stand against it. Water is patient. Dripping water wears away a stone. Remember that, my child. Remember you are half water. If you can’t go through an obstacle, go around it. Water does.” —from The Penelopiad