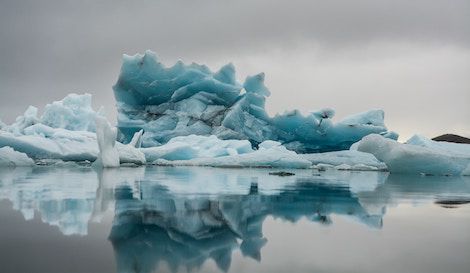 Picture it: you’re in the middle of practically nowhere—a place so desolate that it could double as the setting for a science fiction film set on an alien planet. There are no(t many) humans, there is no Starbucks, there is no local pub. It’s you, a few emperor penguins, and a stack of paperbacks.

Penguins aren’t much for conversation, so the surprises in those books? They’re all that you have. They are the sole thing keeping you from going mad amid long stretches of ice, the midnight sun, and your own repeating thoughts.

I don’t much mind spoilers myself, BUT: I also live in an environment replete with distractions. I can jump from the end of a book, spoiled or not, into my car and head down to Target for a little late night aisle cruising, if I want; I can scoot over to an all-hours bar, order a Guinness, and engage in some weird conversation. Or go to a movie. Or go thrifting. I have options for instant distractions.

A person who’s floating lonely on an iceberg through stretches of frozen sea does not.

Here’s what we know: Antarctica just saw its first attempted murder, and it was definitely—most definitely—over the spoilers to books. Sergey Savitsky and his colleague Oleg Beloguzov have been stationed on King George Island for the past four years, researching and doing other science-y things during their working hours, and then passing their long and getting longer “leisure” hours of nightlessness in the few stark ways that they could: existential woe; ennui; despair. And when that got old (we presume), books.

Maybe it started as a joke born of boredom: Oleg sees Sergey pick up a familiar title. He feels a sudden burst of vicious glee. “Snape kills Harry at the end!” he declares. Sergey’s face goes white. Wondering about that ending was all that he had. His guesses are dead and his curiosity dashed. Now its back to troubling ice floes and wondering why he couldn’t just be a teacher or a grocer or something else nice and dull and local.

Props to Oleg, because it’s a HILARIOUS prank to pull, robbing a colleague of their one escape. The first time.

But EVERY time, for every book? Get a new schtick, Oleg. You’re wearing everyone’s patience thin.

Woe to Oleg that he did not heed the warning.

Before book 34: “Hester Prynne turns out to be a witch, and she hexes the whole town for cramping her style.”

At the thirdway point of book 132: “Amy Dunne was a ghost all along, hell-bent on retribution because Nick had messed with her in a past life.”

Just as book 431 is nearing its end: “Rhett Butler up and decides that he frankly does not give a dam—”

So, Sergey snapped, and according to the attached article, Oleg’s “heart was injured.” Heart?! What heart?! Those books were all that Sergey had.

I’m not promoting violence, but I get it—don’t we kinda all? I might have chosen a method less murdery, but: snowblindness. Madness. Desolation. Sergey did what he did, and I guarantee you Oleg won’t be dropping spoilers again.*

Here’s a knowing nod to temporary booksanity, and here’s hoping that we all have the sense not to get between a stranded person and their books.