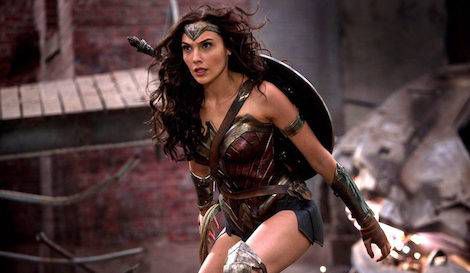 There’s a scene in season two of Transparent in which Maura (Jeffrey Tambor) arrives at a women’s music festival (or “womyn’s festival,” if you’re nasty) and is subsequently greeted by the cisgendered women with chants of “Man on the land!” It’s a pretty offensive moment, one that displays the often repulsive extremism of radical feminism. In an attempt to wrest the phrase from these “womyn,” my female friends and I have adopted it as a way of pointing out whenever a cisgendered, heterosexual male interjects himself or his ideas into a conversation that does not concern him.

On Monday, Nerdist reported that beginning in September, following Greg Rucka’s character-redefining run, the reins of Wonder Woman will be taken over by James Robinson, whose first arc on the series will be centered on Jason, Wonder Woman’s…brother.

Man on the land!

Titled “Children of the Gods,” and featuring art by Carlo Pagulayan and Emanuela Lupacchino, Robinson’s six-month-long run will explore the identity of Wonder Woman’s long lost brother, the only male ever born on Themyscira, and the fallout of his discovery. As Nerdist’s Eric Diaz points out, “the idea of Wonder Woman having a long lost male sibling feels like yet another example of DC trying to force more men into Diana’s family and origin story.” When DC launched their “New 52” initiative back in 2011, writer Brian Azzarello “updated” Diana’s origin to include Zeus as her biological father. This deviated greatly from the George Perez-Era Wonder Woman origin that had Diana formed from clay and granted powers by the female gods. However one feels about Azzarello’s run in general—for what it’s worth, I found Diana’s relationship with Ares and her begrudging usurpation of his duties thrillingly subversive—this formulation of Diana as a product of man flew in the face of her character and purpose. When Rucka took over on Wonder Woman last year, as part of DC’s “Rebirth” rebranding, he made it a point to retcon and condemn this version of Diana’s origin.

While male Amazons were indeed a thing in some versions of the Greek myth, there’s simply no need to have one be the focal point in the pages of Wonder Woman, especially given the rousing success of the recent movie. As the Mary Sue’s Vivian Kane sarcastically wrote on Wednesday, “Because the audiences so enamored by Wonder Woman–the ones talking and tweeting about the character nonstop, buying up merch, and seeing the new movie in record-breaking numbers–they’ve all been saying the same thing, right? We can all agree on the one thing missing from her story: a central male superhero figure.” We don’t need a man on this land.

It’s difficult to not read this as part of a recent trend in which male characters are inserted into female-dominated media properties to increase both the masculine presence and the stakes. The first season of BBC America’s Orphan Black, a feminist sci-fi show that used its cloning concept to critique the roles women are often relegated to on screen, was almost completely derailed by the addition of male clones. More recently, Netflix’s flagship show Orange is the New Black has demonstrated a commitment to highlighting the male prison guards. Last season, we were treated to extended flashbacks involving Mr. Healy and Officer Bayley, the latter of whom would go on to be responsible for the death of Poussey Washington. In this latest season, Bayley’s “emotional journey” in the wake of that death is emphasized throughout.

It’s difficult to come up with reasons for these storylines that aren’t “We need to appeal to more men” or “this story doesn’t make sense without men.” Women are too often taught that stories of men are significant and universal in and of themselves and that stories of women need a man’s presence to make them so.

And it’s not as if Wonder Woman has a dearth of strong male characters. Steve Trevor is a large part of the Wonder Woman saga, both in the pages of her comic and in her movie. In fact, as far as love interests go, Steve Trevor is given a heck of a lot of screen (and page) time. He has his own character arc, one that is both independent from and intersects with Diana’s. (Compare Steve Trevor’s treatment to that of, say, Agent Carter in the Captain America movie.) The addition of a brother for Diana seems to be motivated not by the desire to add male presence but by the desire to add a male focal point; it’s as if DC Comics believes male readers aren’t capable of understanding Wonder Woman and the world she inhabits unless that character and that world are anchored by a man.