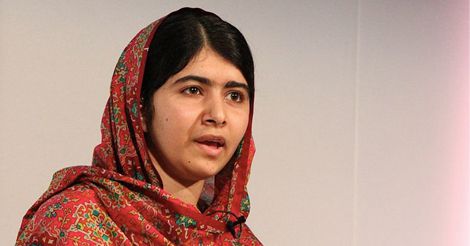 For activist Malala Yousafzai, known forever as the Pakistani girl who was shot at age 15 by the Taliban on her way to school in 2012, shining the spotlight on the millions of people displaced worldwide is a vital mission. The Nobel Peace Prize winner, now 21, drew inspiration for her latest book, We Are Displaced: My Journey and Stories from Refugee Girls, from her own life and from her experiences visiting refugee camps.

Yousafzai writes about her own displacement—first as an internally displaced person when she was a young child in Pakistan, and then as an international activist who could travel anywhere in the world except to the home she loved—as well as the journeys of so many other refugees who have faced similar challenges. We sat down with the renowned civil rights advocate to talk about the tens of millions of individuals who are currently displaced, what she wants the world to know about the refugee crisis and how she learned to forgive.

An interview very much worth your time.

But now, Trenessa is planning to open an actual brick and mortar storefront for Kizzy’s Books & More within the next few months. The intended location is in the Parramore neighborhood in west-central Orlando, Florida. Once launched, it will be the only Black-owned book store in the area, and the Parramore neighborhood is perfect because its a historic community that is currently being revitalized.

So what was it like to have a story go viral? For a few hours, before I came to my senses and shut down my computer, I got to live the dream and the nightmare of knowing exactly what people thought when they read what I’d written, as well as what they thought about me. A torrent of unvarnished, unpolished opinion was delivered directly to my eyes and my brain. That thousands—and, eventually, millions—of readers had liked the story, identified with it, been affected by it, exhorted others to read it, didn’t make this any easier to take. The story was not autobiographical, but it was, nonetheless, personal—everything I write is personal—and here were all these strangers dissecting it, dismissing it, judging it, fighting about it, joking about it, and moving on.

An interesting read by the author of the viral short story Cat Person.