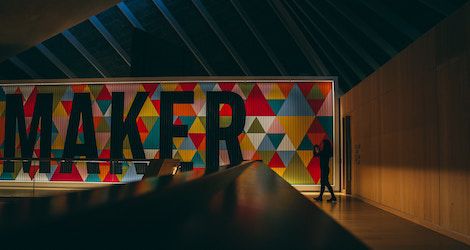 Makerspaces, also known as ‘hackerspaces,’ refer to spaces used by members of the public for content creation. They are community spaces where people can gather to collaborate, share resources, and create new objects or knowledge using a variety of tools. In the early to mid- 2010s, makerspaces were the great new trend in libraries. There was a new focus on library users as citizens and creators instead of just readers, scholars, and consumers. The physical spaces and architectural forms of the library were also changing, with newer libraries being designed with more open spaces, more lighting, and soft furnishings. Additionally, there was a move towards designating ‘makerspaces’ and creative spaces in libraries. The emphasis of public libraries as a site or resource for content creation is highlighted by the 2015 National Library Week in the US, when libraries and library users were encouraged to share on social media what they have created using library resources and tag the posts with the hashtag #librarymade.

One of the great things about makerspaces, and why I think they work well in libraries (whether public, school, or state libraries), is because one of the core requirements of using a makerspace is the same as one of requirements for using books, another of libraries’ resources — imagination. There is value in creative thinking, problem-solving, imagination, experimentation, and play. They allow us to think of new possibilities and creations. This is especially so when we consider how our kids might be spending their free time. Do they have opportunities for play, for invention, for problem-solving, for creativity, for imagination?

Below is a list of books that I think would be great additions to a makerspace library for children. If you don’t have access to a makerspace at your library, or want to do additional tinkering at home, these books can also be inspirational or instructional for any at-home makers and creators. (These books are all aimed at slightly different age groups, so they are for different skill levels of your young maker.) 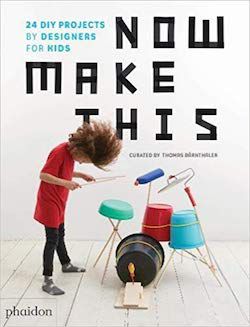 This book is a great instructional book that I think exemplifies what the makerspace movement was all about. There are 24 projects by designers for kids, and include things like a drum set by a designer of chairs and lamps; cut and fold masks by a designer who has designed hotels, schools, and a library; and copters by someone who designs vases and lamps. There are clear step-by-step instructions with photos of the components and finished product of each project. (instructional book)

This is actually from a series called Makers Make It Work, which is about how kids use various maker skills to solve problems they encounter in their everyday lives. Each title has a different theme, like chemistry, woodworking, robots, and sewing. At the end of each book are tips on how you can do the project yourself. The Broken Bees’ Nest is my favourite from the series and is about two kids who find a bees’ nest that was falling apart, and they enlist the help of a local beekeeper to help the bees into a new hive.

The subtitle of this book is ‘How Les Paul Engineered the Solid-Body Electric Guitar and Rocked the World’, and that pretty accurately sums up the book. When Les Paul was a young boy, his piano teacher sent him home with a note saying that he will never be musical. His mum told him not to listen to her, that he is going to be great, that he can do anything he puts his mind to. The story (and book) continues with Les Paul trying out various inventions before landing on the invention that changed the musical world. The book is beautifully illustrated, and the colour and vibrancy of the pictures marry well with the energy of the story and music.

This is a simple and cute picture book about an elephant who just wants to play and do fun things. Her elephant friends are kind of party poopers, giving various reasons for why they can’t play. So Min uses her creativity and imagination to invent a device that allows their swimming pool to fill up with water from a nearby well, and then she and all her friends can splash and play. This book won’t really help makers actually build a device that moves water from a well to a pool, but I do like the message of problem-solving and doing rather than complaining. 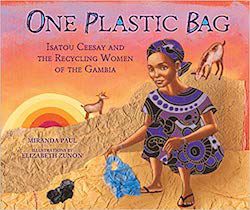 One Plastic Bag by Miranda Paul, illustrated by Elizabeth Zunon.

This is a wonderful true story of how one harmless plastic bag can turn into hundreds of plastic bags that end up ruining the environment, and what one African woman did to alleviate the problem. Isatou Ceesay saw the damage plastic bags was causing, so she and a group of women from her village set about cleaning the bags and crocheting them into purses — turning rubbish into a valued product. I’m including this book on this list because it highlights how ingenuity, creativity, and making things can do great things for the planet.

A great picture book that celebrates leaves and nature and autumn (well, it doesn’t technically mention autumn but the leaves are all autumnal colours so that’s what I’m going with). Leaf Man is simply a collection of leaves that is shaped like a man, going where the wind blows. There is inspiration in here for using objects found in nature to create art and projects — perhaps not quite the same as building a robot or using a 3D printer, but I think there is also attraction in simplicity.

What Do You Do With An Idea by Kobi Yamada, illustrated by Mae Besom (picture book)

A boy has an idea and he doesn’t know what to do with it. He’s a bit scared of it, and worried about what other people might think of it, but eventually he loves it and feeds it and one day the idea is set free. This is a gorgeous picture book with a lovely message that can inspire all makers — that ideas can change the world. 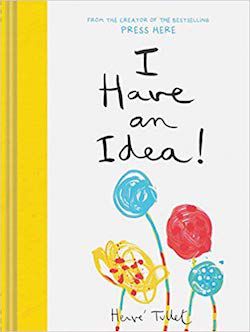 Similar to What Do You Do With An Idea?, this is a book that encourages us to keep teasing our ideas and letting them grow into something big and wonderful. Tullet used paint and minimal colours to create a lively book where it feels like the ideas are leaping off the page.

This book is targeted at the youngest makers, and introduces programming concepts to babies. It’s a fun board book that breaks down what an algorithm and what programming is to its most basic components. It’s never too early to get children started on creating and making, right?