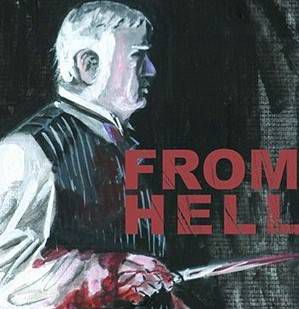 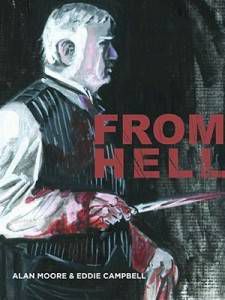 It was announced last week that the FX Network is making a television show (a mini-series, if I’m reading stuff right) out of From Hell, by Alan Moore and Eddie Campbell. As someone who regularly and loudly has opinions about not only Alan Moore’s work, but also about adaptations of his work, it is kind of a no-brainer that I want to talk about it. But what is more surprising, perhaps, is that I’m not as knee-jerk against this as one might expect, given my general grouchiness toward past adaptions of Alan Moore’s work.

The trick, however, is how they carry it off. And possibly I’m just a pessimist, but I suspect they’re going to miss the point.

From Hell has already been poorly adapted once, into the Johnny Depp, Ian Holme movie. It was a boring, fairly directionless film, but it can be interesting to examine in the context of this upcoming TV series, because I suspect they’re going to share a similar problem.

You see, the nature of From Hell the comic is of a work that is very tricky if not nearly impossible to adapt into a form beyond what it is. Despite having pictures and being a “comic,” (you know, like Superman), From Hell has infinitely more in common with a prose novel than anything else. It is a very long, very dense, very mature (in the sense of “graphic” and the sense of “adult storytelling”) work of fiction which has very little interest in Jack the Ripper himself. This is not a “whodunit,” as Alan Moore has said, but a “whydunit,” and that is a vital distinction. You know early on who Jack the Ripper is, and you know what’s going to happen. There’s no mystery or thriller “can we beat the clock and stop the killer?” tension in the story, and there isn’t meant to be. Instead, what you get is a 500+ page careful, thoughtful examination of the society surrounding the murders; a study in the hype and the media excitement surrounding them (the bizarre world of which even From Hell only scratches the surface of. It was a fascinating media circus). It is also a meditation on gender. It is more acceptable to be a man and a killer, than to be a woman and a prostitute (but if you want to be a celebrity, be a murdered woman who is a prostitute). And then, because Alan Moore is never happy just examining the surface of a culture like that, the comic further goes on to discuss how the Jack the Ripper killings and the culture that surrounded them directly birthed the upcoming 20th century. AND all of that is to not even scratch the surface of the occult underpinnings woven throughout the comic. There is a long tour of the occult significance of London, and it is mind-boggling. 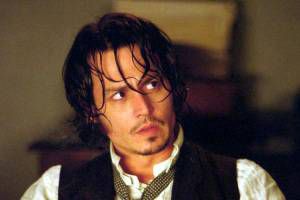 Now you can begin to see why all of this, when approached as a short movie, gets turned into an hour and a half whodunit and can we beat the clock to stop em film. Not even the glory that is Johnny Depp can pull that out of its nosedive. As with all Alan Moore adaptions, there is simply too much in the source material, and it’s all woven together too densely to make a good film by leaving out the tricky bits.

So what about this mini-series TV show? I’m optimistic because we’re finally in a television landscape where you could really do justice to From Hell, the masterpiece comic. All of the pieces are already present, they just have to be assembled. We have shows like Peaky Blinders and True Detective and American Horror Story, now that (in this writer’s humble opinion) they’ve decided to actually hire some writers for season four (Book Riot welcomes your letters).

Our television landscape is in theory at a place where we can make a long, rambling, brooding work of fiction which veers away from being simply about who dun a murder and why and get into the culture surrounding it, the hype, get into the occult corners of why it’s happening and what’s going on. Give us fifteen or twenty long, slow episodes full of brave writing that is willing to forgo cheap and easy killing in favor of much darker thoughts, and we have something potentially brilliant on our hands.

My pessimism, however, leads me to suspect that what we will instead get is a longer, slower version of the film. That the show will get hung up on the murders themselves for all the wrong reasons and leave out all the other stuff.

Now that’s fine, I guess, but what I would say is…don’t call it From Hell. If what you actually want to do is tell a Jack the Ripper story, and what you’re less interested in is, you know, the entire content of the book you’re adapting, then don’t adapt it. Just call your series Ripper or Jack or Whitechapel Blood or whatever the hell and leave the book out of it. Or just mention Alan Moore and Eddie Campbell’s amazing work as a strong influence, and leave it at that. Otherwise, you’re just waffling- aspiring to be an adaption of one thing without actually being that, but still too connected to the source material to wander off and really flex your original muscles and create your own thing.

So. I guess we’ll wait and see. I’m both optimistic and pessimistic here, which is probably why I’m so much fun to watch television with. I have high hopes. Let’s get it right this time, folks.