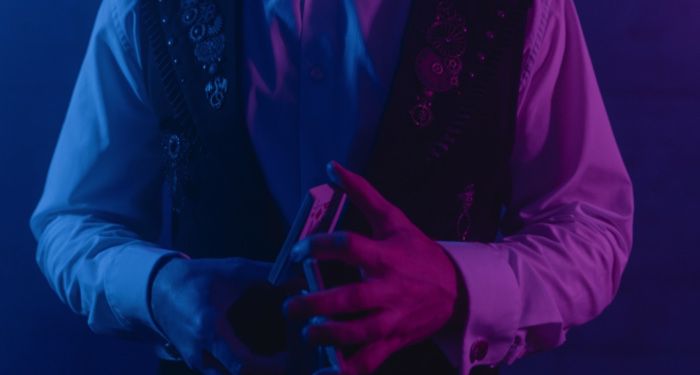 Hello mystery fans! I’ve got mysteries this week that are not fantasy but have magicians and illusionists in them. Two are murder mysteries with the leads being magicians, and one is thievery during a magician’s convention. 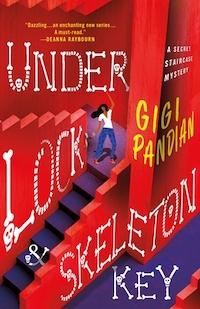 This is one of those books that is not fantasy nor magical but it feels like it is because there are so many fun elements, like hidden staircases and living in a treehouse.

Tempest Raj was a great magician with her own Las Vegas show until an accident happened, followed by accusations, and now she’s back home living with her dad and grandparents and trying to figure out what to do next. In the meantime her father has offered her a job on his crew, which builds fun magical things in homes like walls that move when you pull on a certain book on the bookshelf and hidden rooms. And that’s how she discovers a dead body in a wall that looks just like her! Turns out it’s her assistant/body double from her Vegas act and that just opens up a whole lot of questions… starting with: is the family curse that supposedly claimed her mother and aunt’s lives now after Tempest? Or is someone out to get her? Tempest will have to use her stage knowledge and magic to figure out how the body got there, and more importantly who is behind it.

This is filled with a loving blended Scottish and Indian family, delicious food, secret hideaways, magic, a second chance friendship, and “locked room” mystery solving. If you want to get lost into a book and envy homes with treehouses and secret reading nooks, curl up with this one. 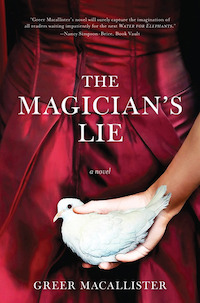 The Magician’s Lie by Greer Macallister

This starts with a woman telling the reader she is going to kill her husband (the exact moment I was all in) and then proceeds with a past and present timeline to reveal all.

The Amazing Arden is a female illusionist in the early 1900s known for such amazing acts as sawing a man in half, until one night her husband is found murdered on stage and she’s disappeared. Depending on who you’re rooting for, lucky/unlucky for her, police officer Virgil Holt captures her. Holt is hiding a recent disability, terrified that he’ll be fired because of it, and views catching Arden as his ticket to keeping his job. But Arden swears up and down on everything that she is innocent and did not kill her husband. So while handcuffed to a chair, Arden tells Holt the story of her life, including how she became an illusionist, and how she came to be running away from the murder of her husband.

Past and present timelines only work for me when both timelines offer me enough interesting stories that I don’t feel like it needs to hurry up already so we can get back to the mystery. I was always interested in Arden’s story, from childhood to present, but especially when she first stepped into a traveling performance and how she worked her way up. Learning about all the tricks and illusions in the 1800s was fun, and I loved the did-she-or-didn’t-she running element. 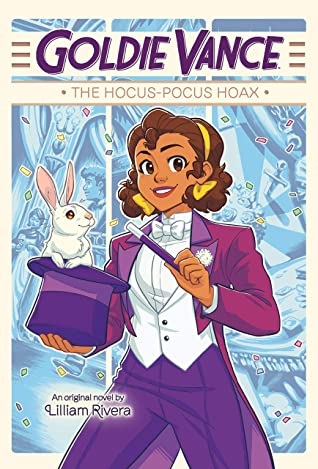 This is the middle grade series adaptation of the graphic novel series that follows the fantastic character Goldie Vance. Goldie works as a valet at a Florida beach resort that her father works at and her best friend. Also, the resort has a PI on staff—this would make me not want to stay there? Like how much crime goes on here that you need a PI on staff?! But for story purposes, excellent! And of course Goldie wants to be the PI, which she technically is since she always inserts herself into investigations to figure out what is really going on.

In this case a magician’s convention comes to the resort and Goldie not only has to solve the mystery of who is stealing the magicians’ set items, but there’s also someone trying to solve the mystery away from Goldie—like she always does to the in-house detective. This is a fun book with a lot of magicians, mystery, crime solving, a first date, friendship, magic tricks, and chaos.

If you want full character development (and don’t mind mysteries starting halfway into the book) pick up Goldie Vance: The Hotel Whodunit, but you can totally start with this book if you want the mystery from the start and a hotel crawling with magicians.